Apple cider vinegar has enjoyed a steady climb in popularity. Most of us have a bottle sitting on the fridge door waiting to be used. It also comes with some health claims, so you might also find it in the form of a “shot” at juice bars, or you can take a swig from an apple cider vinegar drink infused with fruit juice. 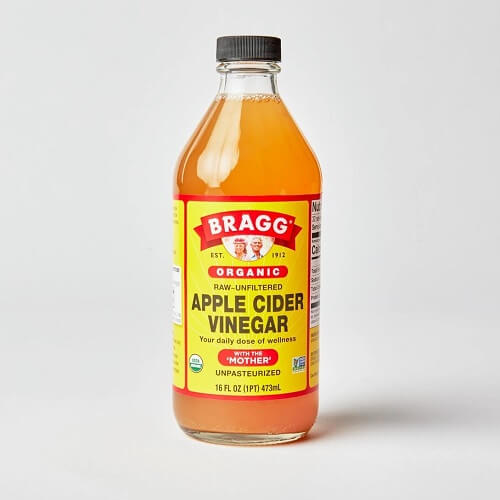 Does apple cider vinegar have any health benefits?

What Is Apple Cider Vinegar?

Apple cider vinegar is made from apples that have been crushed, distilled, and fermented — usually with mother of vinegar (Mycoderma aceti), an acetic acid bacteria. It has been touted by health communities as a weight loss aid, but according to Harvard Health Publishing, those claims are backed by little evidence. However, that bottle of apple cider vinegar has a lot of uses in the kitchen and in your beauty routine, too. 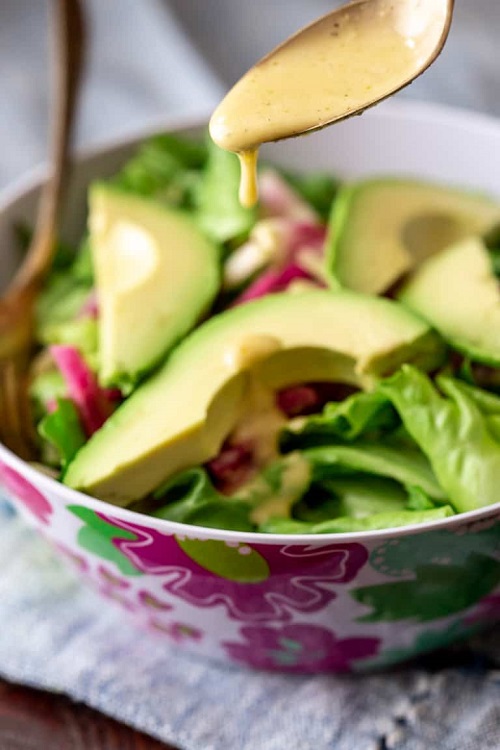 While marinades are traditionally used to flavor and tenderize meat, you can use them in vegan cooking as well for tofu and tempeh. Many cultures have their own version of a marinade, which consists of vinegar, salt, and sugar. An acidic ingredient like apple cider vinegar, it breaks down the food’s surface and allows the flavor to get in. It works in tandem with salt and sugar. Follow this recipe for an apple cider vinegar marinade, which can be used on plant-based protein. Use a vegan Worcestershire sauce — the classic version contains fish. 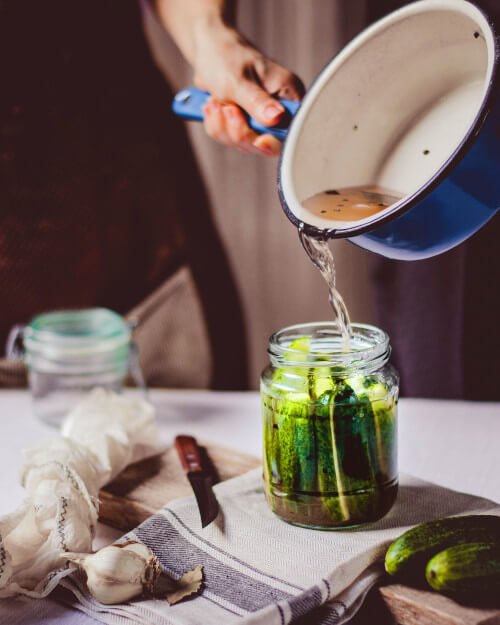 When it comes to quick pickling, any vinegar can get the job done — including ACV. Similar to a marinade, all you need is vinegar, salt, and sugar. Quick pickles won’t develop the same deep, fermented flavor as other pickled foods, but they’re convenient. You don’t need to can them — just make and pop the mason jar in the refrigerator. It’s best to pickle with fresh vegetables. Be sure to slice them evenly, too, for consistent flavor and texture. To quick pickle, mix equal parts vinegar and water, then add a tablespoon of salt and sugar per cup. You can also customize with herbs and spices (like thyme, dill, and rosemary), crushed garlic cloves, or whole spices like peppercorns and mustard seeds.

4. Amp Up Your Cooking

Apple cider vinegar is versatile in the kitchen. Add a splash to reductions to balance out the saltiness. Braise dark, leafy greens like kale or collards in oil (or water) and spices, then add some apple cider vinegar and allow everything to cook down. The same trick works on braised and baked beans. 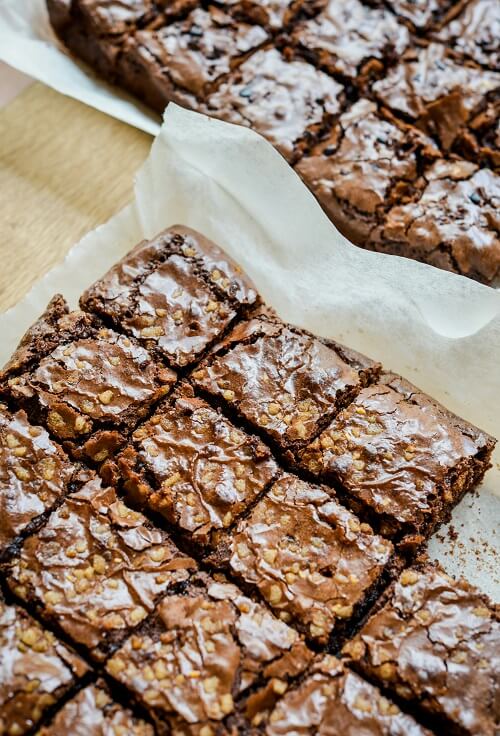 Buttermilk is a baker’s dream. The acidic milk, when combined with baking soda, gives a lighter texture to baked goods. You can make dairy-free buttermilk using apple cider vinegar and vegan milk (this works best with a high-protein option, like unsweetened soy milk). To do this, combine one cup of soy milk with a tablespoon of apple cider vinegar and let it sit at room temperature for ten minutes. This will last for about three days, refrigerated, in an airtight container.

It’s not just for food. Make a kitchen cleaner with a 1:1 solution of apple cider vinegar and water — it’s important that you follow this ratio, as the acid needs to be diluted in order to weaken it. Adding a quarter cup to your dishwashing cycle can help remove stains from glasses while also de-odorizing the machine.

Apple cider vinegar is great for DIY vegan beauty, too. Here’s what you can make. 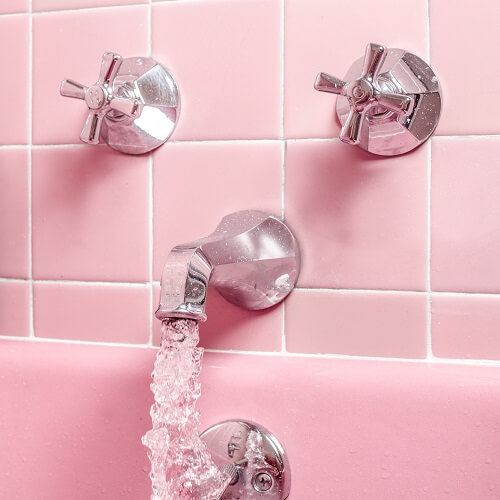 Add apple cider vinegar to your bath for soft skin.

Make a skin-soothing bath soak by adding eight ounces of apple cider vinegar to warm water. Chill out in the tub for up to 25 minutes. Because of its acidic nature, adding apple cider vinegar to your bath may help treat dry skin and body odor, according to Medical News Today. Those with sensitive skin should exercise caution, as it might make skin drier. You can also add Epsom salt to your bath.

Apple cider vinegar can be used as part of a DIY skincare routine. Toner, applied to the face and neck after cleansing and before moisturizing, is astringent in order to remove dirt and reduce the appearance of pores. Apple cider vinegar’s acidity makes it right for the job. To make a toner, add two tablespoons of apple cider vinegar to a cup of water. For oily skin, add a teaspoon of witch hazel. 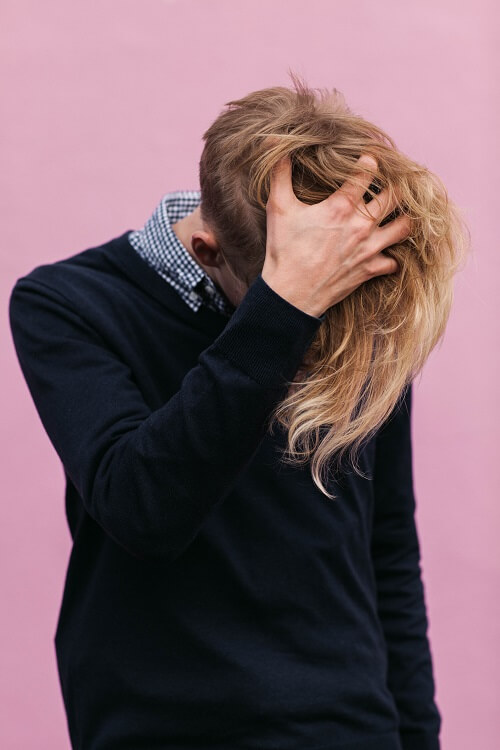 A homemade hair rinse can relieve a dry scalp.

An apple cider vinegar hair rinse can help manage dandruff or a dry, itchy scalp. It may also give shine to dull hair. To make a rinse, mix a couple of tablespoons of apple cider vinegar with water. After shampoo and conditioner, work it into your hair and let it rest for a few minutes and then rinse.

Vinegar can help protect skin from bacteria, fungi, and other microbes that may cause athlete’s foot and odors. Acetic acid, a component of apple cider vinegar, is known to have antimicrobial properties. You can make a skin-softening foot soak by mixing one part apple cider vinegar with two parts warm water. Let your feet soak for about 20 minutes. Those with sensitive skin should be careful not to use the soak too often, as it could irritate the skin. According to Medical News Today, people with diabetes should not use apple cider vinegar soaks to treat foot problems, as it requires specialist care. 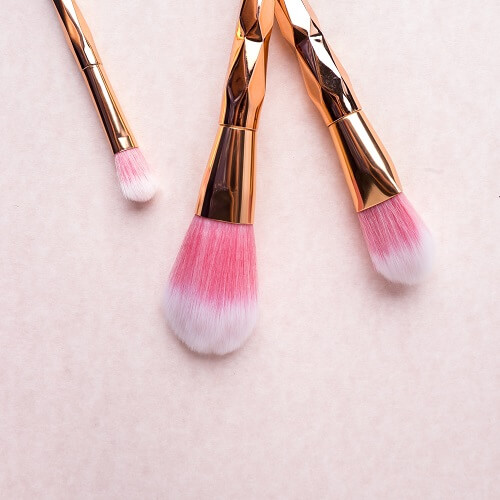 Makeup brushes might be used every day, but cleaning them often comes as an afterthought. They should be cleaned at least once a week to avoid product buildup. Giving your brushes a good wash can also kill bacteria buildup, which can prevent breakouts. Washing once a week can also extend the life of your bristles — so there are a lot of good reasons to give your brushes a rinse. Apple cider vinegar can get the job done.

To clean your makeup brushes, combine one cup of warm water, a tablespoon of apple cider vinegar, and half a teaspoon of dish soap. Keep the brush head away from the soap and water, as it could cause the glue holding the bristles in place to disintegrate. Swirl the brushes in the solution until they look clean, then rinse and lay flat on a paper towel — don’t dry your brushes vertically, as the water could drip down and cause the bristles to come loose.