(Updated November 16, 2020) | Thanksgiving is one of America’s biggest food holidays. While it’s traditionally centered around a turkey, more and more individuals are opting for a meatless holiday. Although a savvy cook could create a vegan Thanksgiving meal with items bought from any grocery store, Trader Joe’s is renowned for its flavor-packed festive vegan holiday food items and affordable prices.

Trader Joe’s brought back some favorites in 2020, like its Breaded Turkey-less Stuffed Roast, along with some new additions that are sure to make the holiday convenient and delicious. While the vegan options vary by region, here are 20 Thanksgiving Trader Joe’s staples to add to your shopping list. 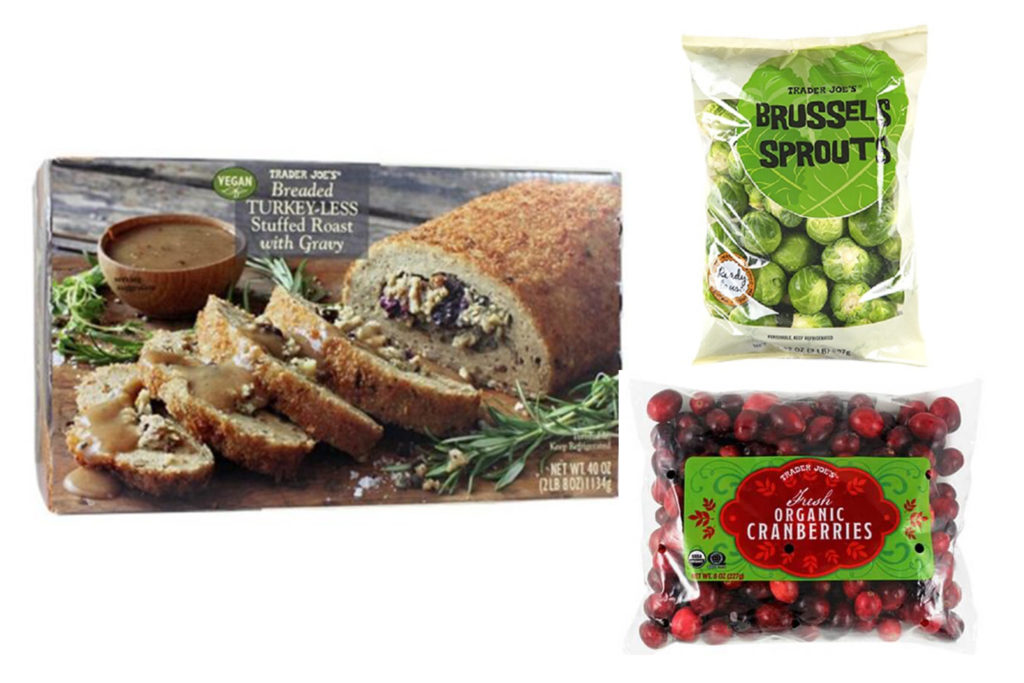 Trader Joe’s has all the vegan food you need to round out your holiday feast. | Trader Joe’s

Skipping a traditional turkey meal doesn’t mean you have to load up on side dishes, because Trader Joe’s brought back its vegan Breaded Turkey-less Stuffed Roast with Gravy. The roast is made with a blend of soy and seitan (wheat gluten) and it’s stuffed with nutty wild rice and bursts of cranberries. The outside is coated with a crispy, herbed bread seasoning. Plus, it comes with vegan gravy.

Whether you make your own or opt for store-bought, cranberry sauce is a Thanksgiving staple.

This vegan grain-free stuffing tastes just as good, if not better than many traditional stuffing choices. Trader Joe’s frozen mix contains all the herbs – parsley, thyme, bay leaf, rosemary, and sage – that give stuffing its savory taste. The cauliflower, which takes the place of breadcrumbs, has a nice crunch to it and pairs well with the stuffing’s other star – cranberry.

This year, Trader Joe’s introduced organic vegan gravy made from mushrooms and seasonal herbs. Pick up a tub or two—it never hurts to be prepared. 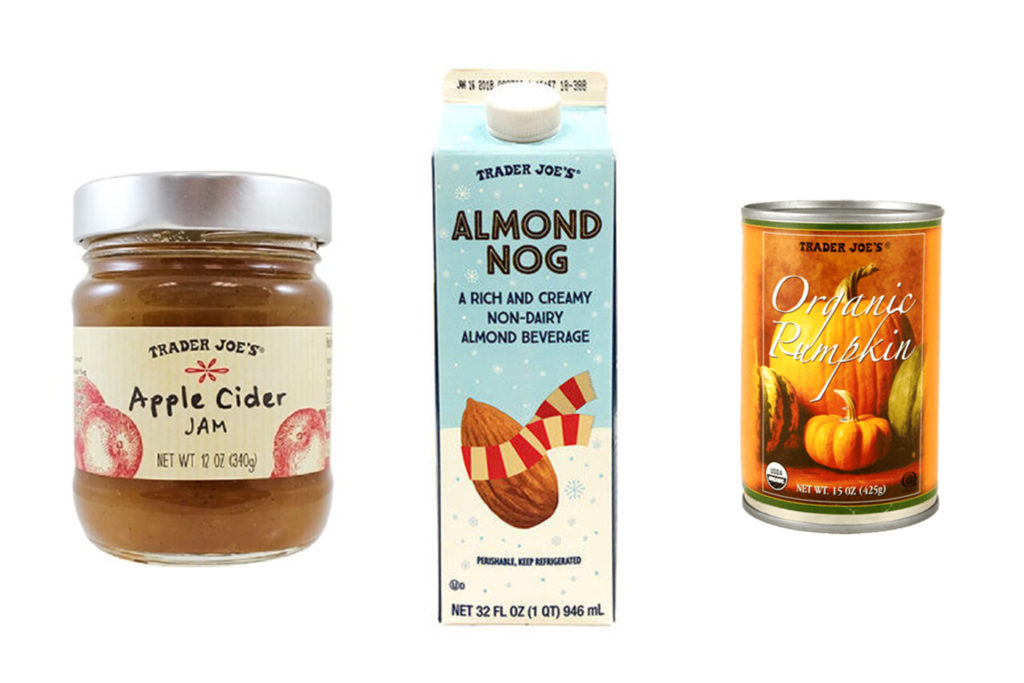 If you plan on making your pumpkin pie from scratch, consider getting Trader Joe’s Organic Canned Pumpkin to make your pie’s filling. it only contains pumpkin, so, you can add as much or as little pumpkin pie spice as you’d like. Looking to try something different? Try using canned pumpkin instead of oil in Trader Joe’s Pumpkin Bread Muffin Baking Mix—the store carries both regular and gluten-free.

Trader Joe’s coconut whipped cream is back again, in updated packaging. The supermarket chain first launched its Coconut Whipped Topping around last year’s holiday season. Use it to top pie or serve it with the banana bread (more on that below).

This Apple Cider Jam pairs fantastically with warm vegan biscuits and a pat of dairy-free butter. Save the leftovers (if there are any) for topping pumpkin pancakes. According to Trader Joe’s, this jam is made from “Maine and Washington apples, New England apple cider, and spices including cinnamon, allspice, cardamom, cloves, coriander, ginger, and mace.”

Spruce up your drinks table with something seasonal. Trader Joe’s Pumpkin Pie Spiced Ginger Brew is a bubbly, non-alcoholic beverage featuring a mulled apple cider-like base, ginger puree, and pumpkin spice. It comes in a swing-top glass bottle, so it makes for a perfect host gift.

Like classic eggnog, Trader Joe’s vegan Almond Nog is spiced with nutmeg and ginger. Made from California almonds, it’s delicious on its own or as an ingredient in festive desserts.

Trader Joe’s launched this vegan banana bread last year and so far, it’s a keeper! The supermarket describes this bread as “boasting a fabulously sweet banana-walnut flavor and dense, moist texture. Every soft, flavorful bite gives in nicely, without any of the rough or gritty consistency that you can occasionally encounter in certain other ‘alternative’ breads.”

Serve it for dessert with coconut whipped cream and coffee.

Featuring a harmonious blend of white button, cremini, and shiitake mushrooms all wrapped in a golden, flaky puffy pastry—these delicious-looking pastries will surely be a favorite at your Thanksgiving Day feast.

Take your Thanksgiving spread to the next level with Trader Joe’s seasonal harvest chili. The savory chili includes butternut squash, sweet potatoes, cauliflower, pumpkin puree, black beans, and quinoa for a taste bud-pleasing dish the whole family is sure to love.

What’s a Thanksgiving meal without a heaping side of vegan mac n’ cheese? Head on over to Trader Joe’s for tender shell pasta slathered in a creamy cheezy sauce made from a unique blend of butternut squash, coconut milk, and various oils.

Eat your Thanksgiving meal in chip form with Trader Joe’s stuffing-flavored potato chips. Each potato chip is packed with the flavors of the iconic holiday dish. And take it from me, these savory chips are hard to put down.