The sloppy joe burger is an American favorite; it goes by many different names, including manwich, sloppy jane, and slush burger. Whatever name you grew up with — which depends on which part of the United States you’re from — the concept is the same, it’s messy, it’s meaty, it’s saucy, and most importantly, it’s delicious. In fact, it’s so loved across the country, it even has its own national day, on March 18.

Although the traditional version of the sloppy joe contains beef or pork — the recipe dates back to the early to mid-1900s — you don’t actually need animal meat to make the sloppiest, tastiest, sauciest burger. Chuck in lentils, beans, vegan meat, cauliflower alongside pretty much anything else you fancy, stick it in between a bun, and you’ve got yourself a delicious veganized sloppy Joe.

If you’re still stuck for inspiration, here are 13 of the tastiest vegan recipes you could make for Sloppy Joe Day. 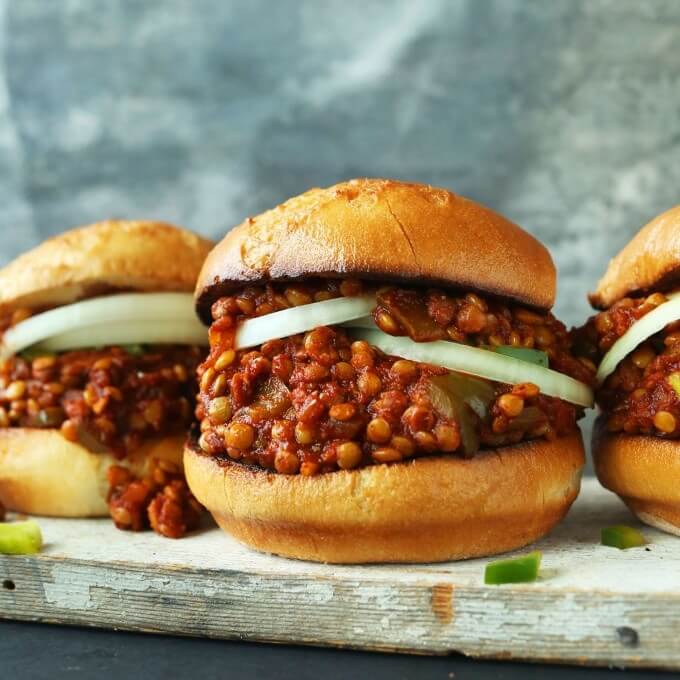 This easy recipe by Minimalist Baker is perfect for all the family, it involves simple plant-based ingredients, including lentils, peppers, onions, and vegan Worcestershire sauce. It takes around 30 minutes to whip up and when you’ve tried it once, it will likely become one of your go-to weeknight dinners.

According to Minimalist Baker, “These [Sloppy Joe’s] would make the perfect meal to throw together when you need something quick and hearty to feed a crowd. One batch should generously serve four. And if you’re a solo diner, this recipe is great to have around during the week to reheat for lunches or easy, healthy dinners.” 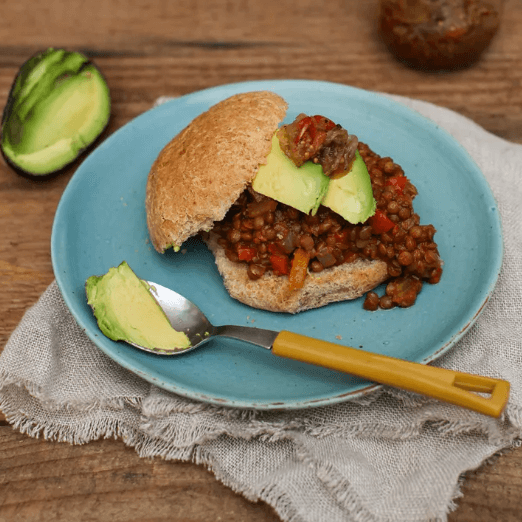 According to chef Aimée Wimbush-Bourque, who put together this recipe for Jamie Oliver’s site, this vegan recipe is even better than the meaty original. She notes, “when I swapped French lentils in for ground beef in my recipe for vegan sloppy joe – the result was simply astonishing.”

All this recipe needs is — of course — some French lentils, sweet pepper, ground cumin, onions, and tomato sauce, among a few other bits and pieces. Again, it only takes around 30 minutes. 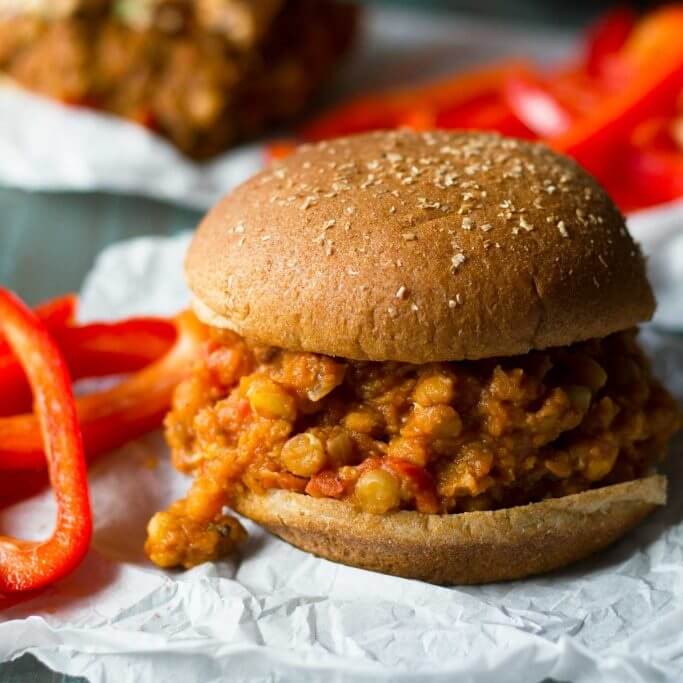 This recipe takes around an hour, however, according to Pass the Plants, it requires minimal effort from the chef. It encourages you to chuck it altogether and then do as you please while you wait for the Instant Pot to do its thing. “No monitoring the stove, no staying in the kitchen at all, for that matter,” says Pass the Plants. “Go for a walk. Read a book. Do some dishes.” 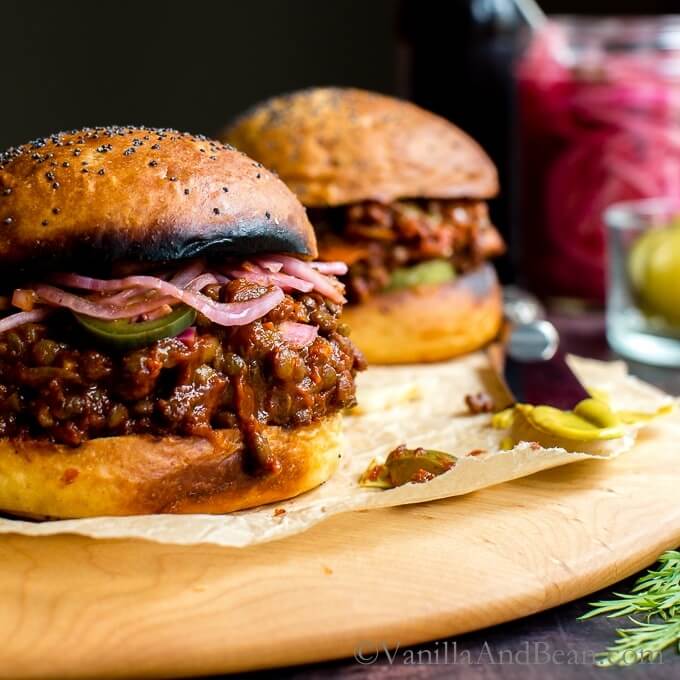 These lentil Sloppy joes by Vanilla and Bean get their tang from the added mustard and pickle juice. But if you want an extra tang, after you’ve quickly whipped up this easy recipe, you can add jalapeños, pickled onions, pickles, or anything else you fancy. If this is all sounded just that little bit too tangy for you, you could make some creamy cooling coleslaw. 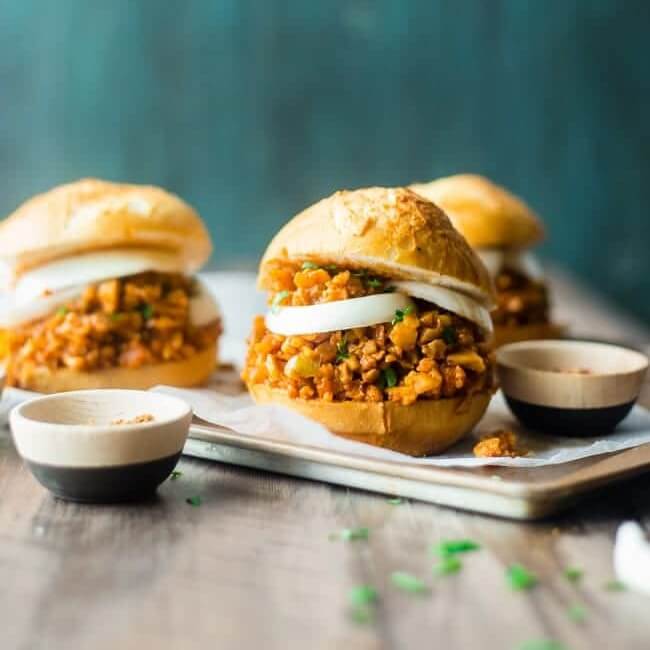 If lentils aren’t really your thing, consider trying cauliflower instead, just like Food Faith Fitness. According to the recipe blogger, despite their healthy-sounding title and ingredients, these cauliflower sloppy joes could fool even the biggest meat-lover in your family. “Many other recipes use things like lentils, but I think the cauliflower is the best, as it has the least taste,” writes Food Faith Fitness. “It’s the easiest way to trick your family into eating these!” 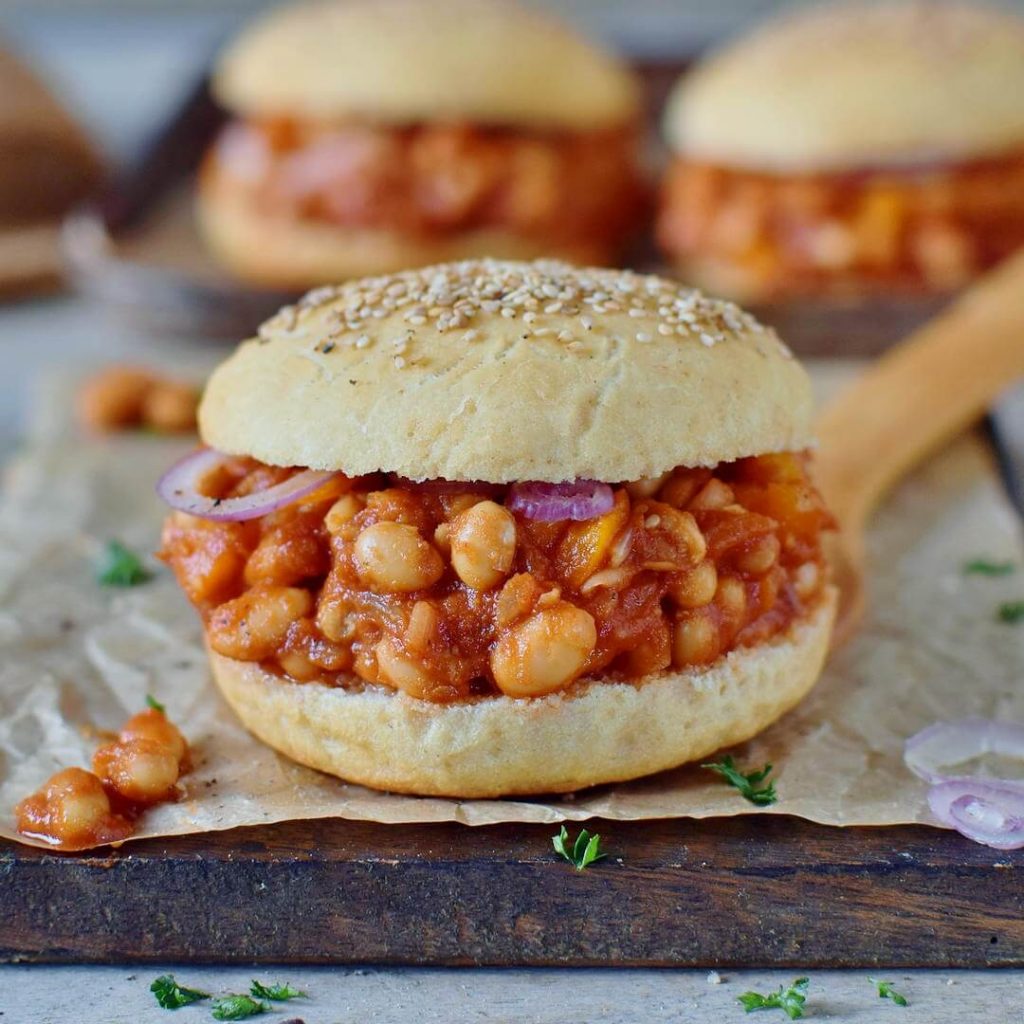 Cannellini beans make the perfect filling for a sloppy joe; they’re packed with protein and B vitamins. But most importantly, they’re super tasty, especially when paired with spicy cayenne pepper, garlic, tomato sauce, and bell peppers — like in this 20-minute flavorful recipe by Ela Vegan. The blogger notes, “eating [these] sloppy joe buns can be a messy experience but it’s so worth it!” 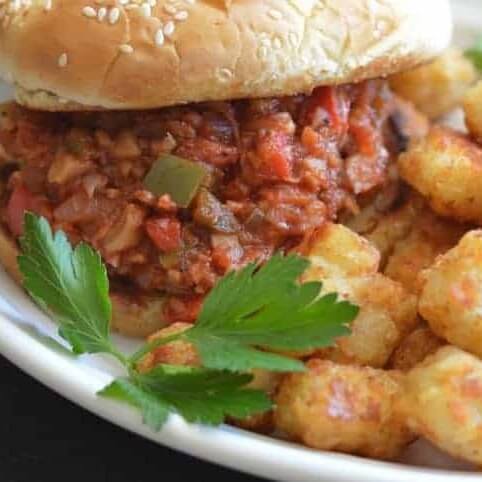 Popular vegan meat jackfruit is perfect for a sloppy joe, it mimics the texture of pulled pork or chicken, giving your sandwich a nice traditional meaty texture. Mix in a food processor and then add some sauteed onions and peppers to create these crowd-pleasing sloppy joes by Living Vegan. 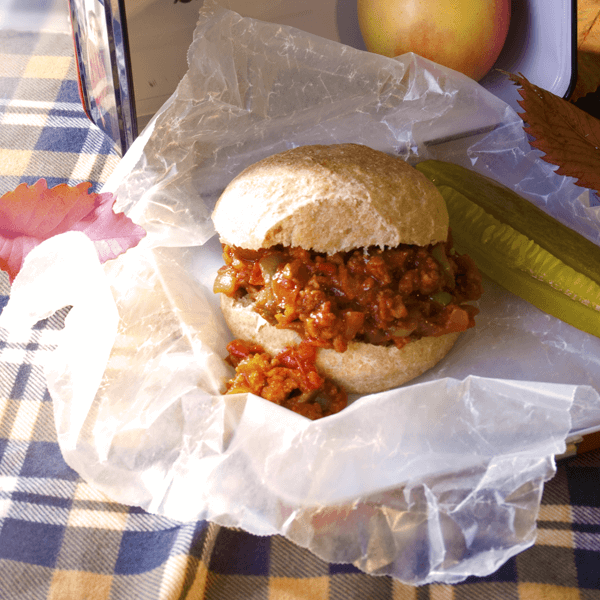 Like jackfruit, seitan is another vegan meat that’s soaring in popularity. It’s versatile and soaks up the flavor of spices and sauces, making it the perfect ingredient for a sloppy joe dish. The recipe creator says, “Looking for a vegan sloppy joe recipe that tastes just like the manwiches you are before you became vegan? This is the recipe. I dare say, it tastes better.”

They add, “I would say that you will want to shout out ‘[oh my god]!’ after you take the first bite but you won’t be able to stop eating long enough to shout it.” 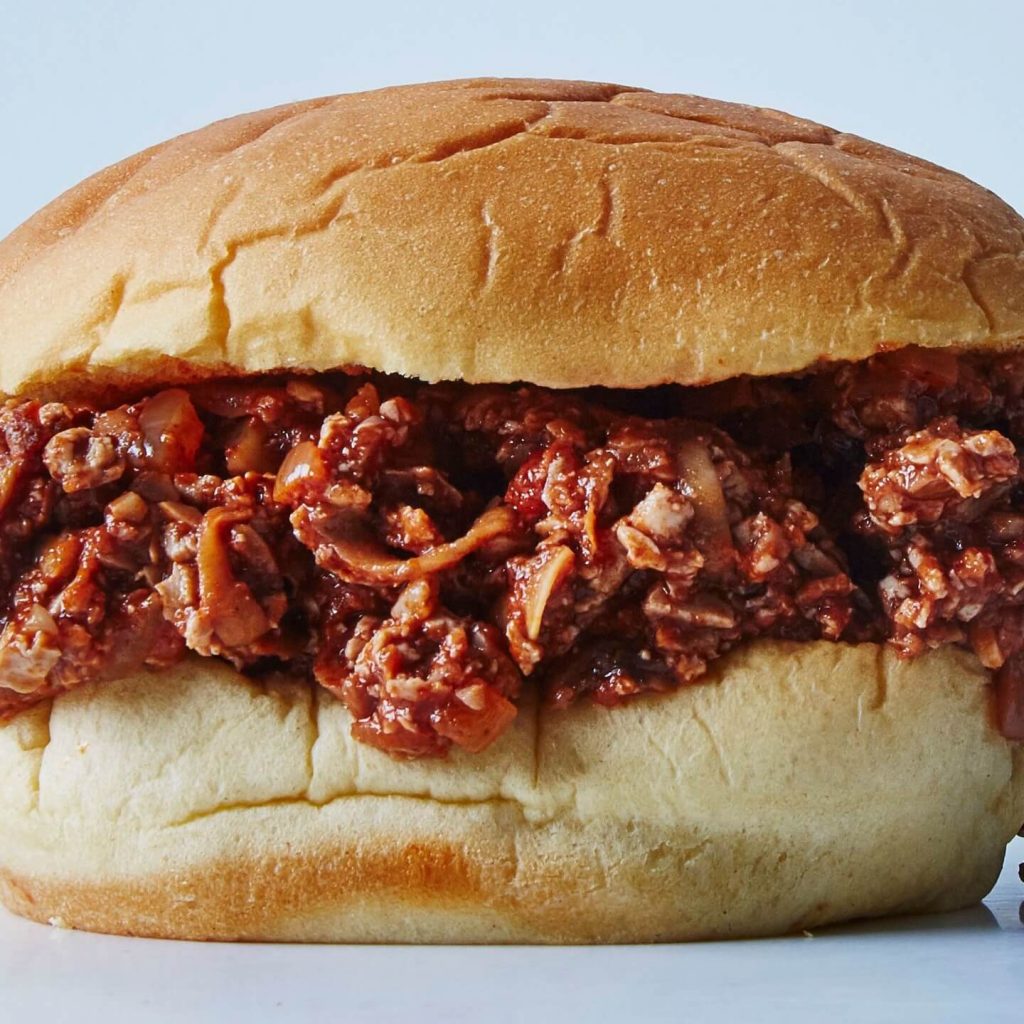 If you would prefer to stick to a classic vegan protein option, then this tofu sloppy joe recipe by Bon Appetit could be the one for you. A good source of protein, tofu is a healthy and delicious component to add to any recipe, and it makes this sloppy joe recipe a go-to for casual dinners with friends and children’s parties alike. 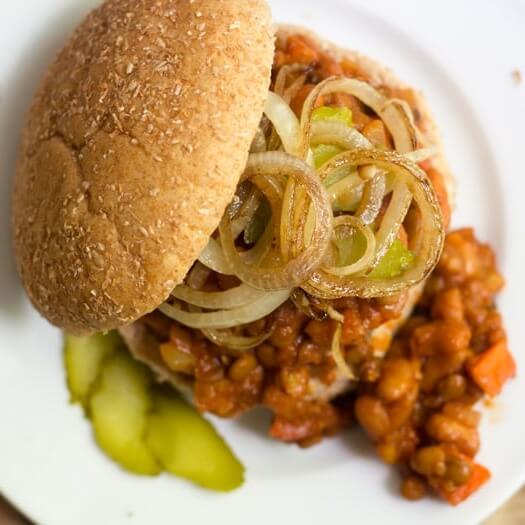 This super easy recipe by Connoisseur Veg involves grabbing any rogue cans of beans in your pantry and mixing them together to create something delicious. As the blog explains, as long as you’ve got the sauce, “all you need is some sloppy vegan food thing to put into [it].” Pop in some pinto beans, lentils, kidney beans, whatever you like, there are no restrictions to this recipe.

“All kinds of beans can work, so why limit oneself?” asks Connoisseur Veg. The blog continues, “I had a can of brown lentils that seemed like they’d be perfect, and they were! But you can use just about any can of beans you’ve got hanging around.”

Why not allow your dinner take you on a mental vacation to the beaches of Hawaii? This recipe involves Earth Balance spread, lentils, onions, peppers, and a ring of pineapple to give it a little fruity kick. According to Earth Balance, “there’s something about a sloppy joe sandwich that’s oh so craveable, and the sweet and savory sauce in this recipe will send you straight to taste bud heaven!” 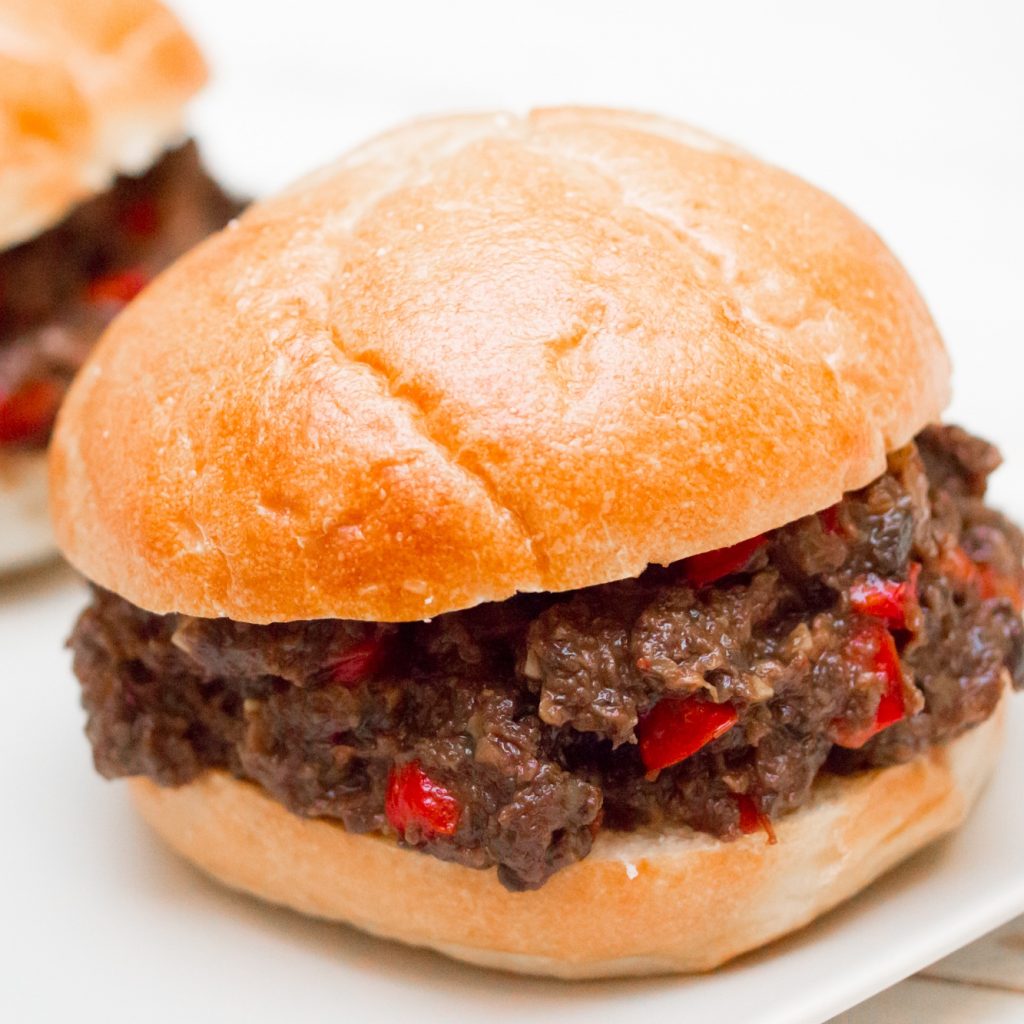 Mushrooms are a super healthy vegan ingredient, packed with vitamin D, as well as potassium and magnesium. They also do a great job of mimicking the taste and texture of animal meat, and because of this, they work really well in a sloppy joe recipe! According to Jerry James Stone, “mushroom meat is my new thing.” He added, “I was just so happy with the texture and how filling it was.” 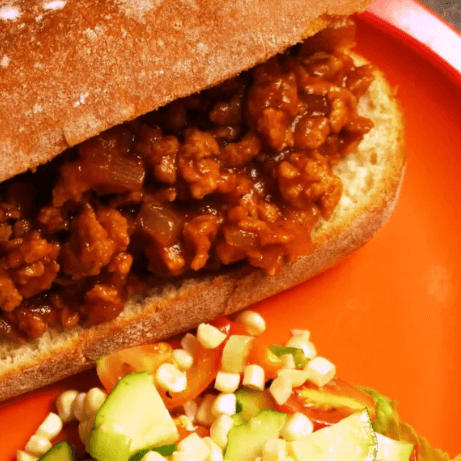 According to The Spruce Eats, these textured vegetable protein sloppy joes are perfect for kids,  adults, and teens alike. Not only is the filling tasty and cholesterol-free, but it is also versatile and makes a great leftover ingredient. Add to chili, stuffed peppers, or casserole for the following lunch or dinner, whatever takes your fancy.