Crocodiles don’t have the best reputation. The carnivorous species is known for eating pretty much any source of meat they can wrap their jaws around, from fish to birds to crustaceans.

They’ve even been known to attack humans, leading the media to “paint a picture of fearsome aggressive beasts that reign terror,” reports the BBC. It adds that whilst the creature is undoubtedly dangerous, they are simply doing what nature has intended them to do. “They are opportunistic predators,” it notes.

But 200 million years ago, the picture may have been a little bit different. According to new research published in Current Biology, some ancient crocodiles could have had an appetite for plants.

The research suggests that while some crocodiles during the Mesozoic Era were omnivorous (eating plants and meat), some were herbivores.

University of Utah grad student Keegan Melstrom and Randall Irmis, the chief curator at the Natural History Museum of Utah, came to their conclusions by studying 146 fossilized teeth from 16 extinct crocodyliform species.

Carnivores have sharp, smooth teeth, for biting and tearing their prey. The teeth of a herbivore are more complex, as they must break down food in their mouth before swallowing. According to Irmis and Melstrom, ancestors of modern crocodiles evolved at least three times to eat plants, the New York Times reports.

Can Everyone Be Vegan? 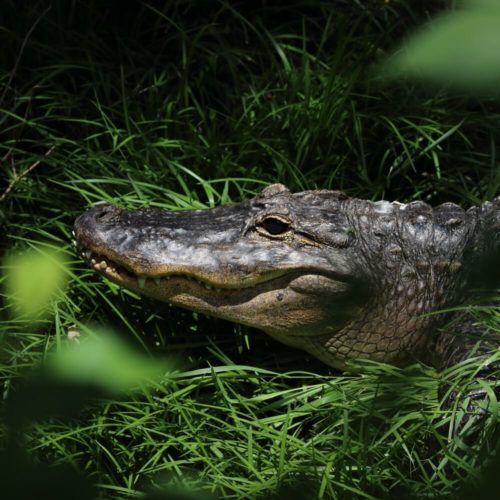 Ancestors of modern crocodiles may have survived on plants

If crocodiles from millions of years ago can survive on plants, does this mean everyone can? There are quite clearly a significant number of differences between modern humans and ancient crocodiles. However, like the latter, the former can also live without eating meat.

For some, it’s becoming easier than ever to follow a plant-based diet. Around the world, supermarkets, restaurants, and even fast-food chains have launched new vegan options. More and more people are opting to ditch meat, with 114 million Americans eating more plant-based food to improve their health this year.

But going vegan is not a straight forward option for many. Presumably, ancient crocodiles had an abundant source of plants. The same can’t be said for every human on earth. For those who live in food deserts — areas where fresh foods are inaccessible — or survive on little to no income, veganism is not always the easiest option.

While there is no overnight fix to make healthy vegan food accessible to these communities, some organizations, like Chilis on Wheels, are working to make a difference.

“Through services such as meal shares, food demos, clothing drives, and mentorship, we work in areas all around the country to help make veganism accessible to communities in need,” it notes on its website. “We provide networks of support and build strong empowered communities within the areas that we serve.”