Ben and Jerry’s have created the most amazing vegan desserts using their vegan ice creams. You have to love their non dairy range made from almond milk and certified 100% vegan with flavours that include ‘Coffee Caramel Fudge’ and ‘Caramel Almond Brittle’.  They’ve also invited people to come up with a new flavour combo which will be released soon, giving us 8 flavours to choose from.

Whilst we’re waiting for that we thought you might like to try a new take on some of the existing flavours. These 3 desserts use Ben & Jerry’s P.B. and Cookies, Cherry Garcia, Coffee Caramel Fudge and Chocolate Fudge Brownie, so if you can resist eating the tub as soon as it’s opened you can turn an already amazing ice cream into a proper dessert! 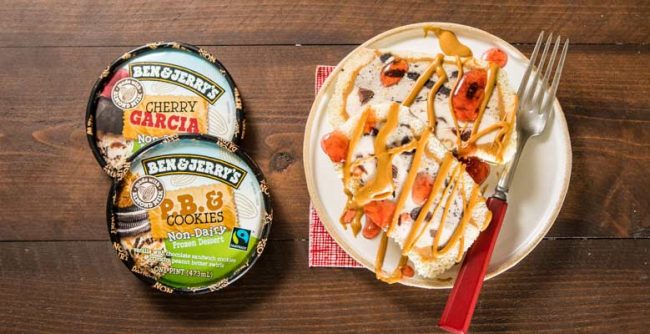 With just 5 ingredients this is quick and easy to rustle up and it makes a decadent dessert which the kids will love too. Using Ben & Jerry’s P.B. and Cookies and their Cherry Garcia wrapped in vegan bread and drizzled with your favourite peanut butter and jelly you can’t go wrong. Full recipe here. 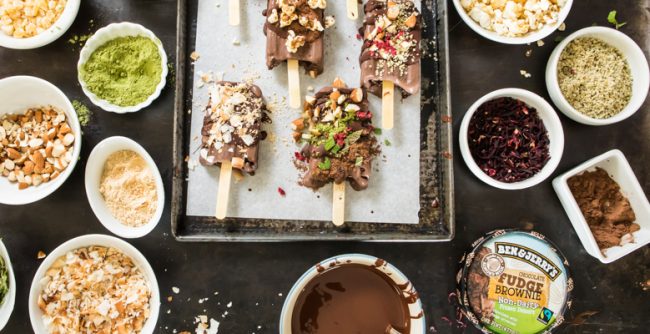 Simply soften Chocolate Fudge Brownie ice cream into moulds, melt chocolate chips and coconut oil to make a glaze and then let the fun begin! You can add any toppings to create whatever flavour combinations your heart desires. Would be a great one for the kids to get stuck in with too. Recipe here. 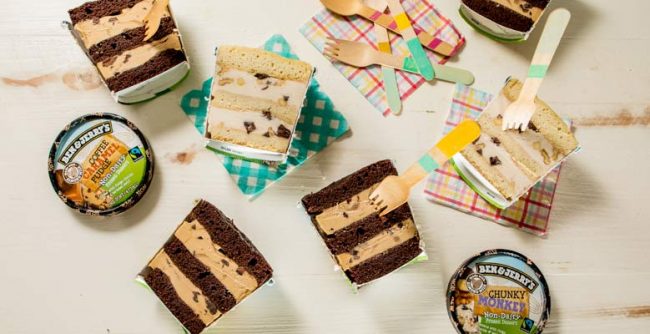 These portable desserts would be great for cook outs, picnics and family BBQ’s. Using the empty Ben & Jerry’s tub, layer vegan vanilla or chocolate cake with Coffee Caramel Fudge Ice Cream or Chunky Monkey. Re-freeze and then slice the tub in half and eat straight out of the container for a dessert on the go. You can add as many toppings as you’d like too, we’d go for chopped nuts and hot chocolate sauce. Full recipe here, including how to make great vanilla and chocolate sponges.