With the spring season fully underway, there’s no better time to embrace the bounty of fresh fruits and veggies. These 31 vegan recipes make it easier than ever to eat perfectly plant-based every day in May and well beyond.

May tends to be the month that we stop toting our overcoats everywhere and start wondering whether it’s too late to book a budget summer holiday. May is traditionally associated with rebirth and new beginnings, as demonstrated by the European May Day festival which has its roots in Pagan folklore. In terms of agriculture, May is abundant with seasonal fruit and vegetables, which are best enjoyed fresh. For maximum seasonal eating, here our 31 recipes for a perfectly plant-based May.

Aside from its flamboyant coloring, this Springtime broccoli has a more peppery flavor than its everyday counterpart. This recipe brings out the vegetable’s piquancy with a light tempura batter. 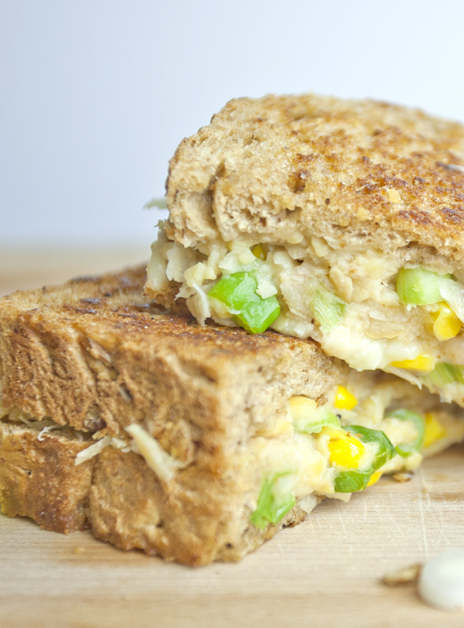 Melt into warmer weather with this vegan tuna melt.

Vegan tuna has become a big fish in the vegan seafood market, with Whole Foods now stocking Good Catch Food’s legume-based tuna while Ocean Hugger Foods crafts its “ahimi” tuna from tomatoes. This recipe uses mashed chickpeas flavored with lemon and spring onion to recreate tuna, which is then slathered with vegan cheese to make the classic sandwich. 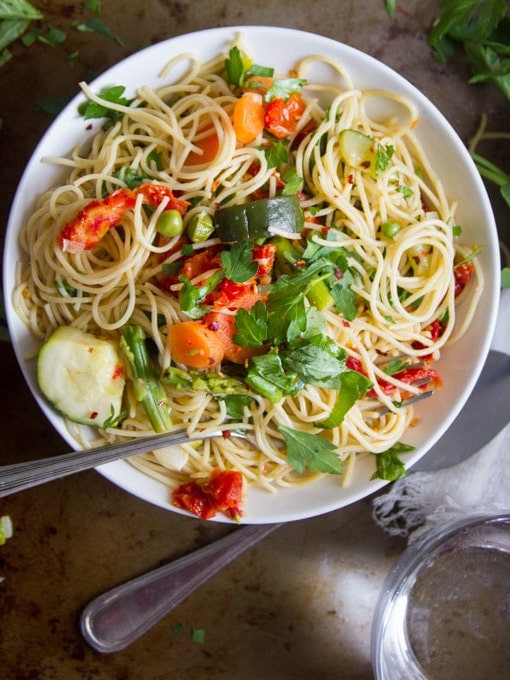 Primavera, consisting of lightly sauteed springtime vegetables, is the archetypal May pasta dish. This version drenches the tender veggies in a decadent white wine sauce with plenty of garlic.

Get the recipe here 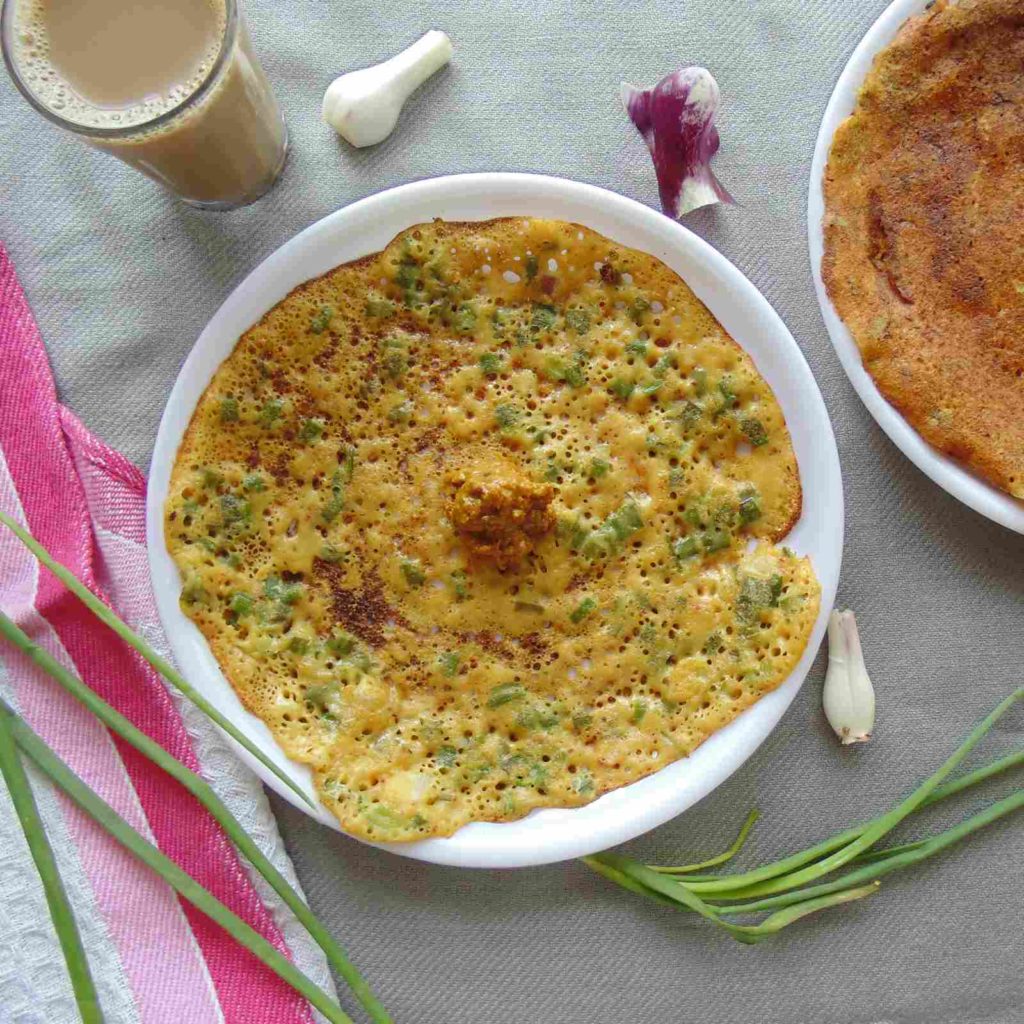 This South Indian vegan dosa is light and crispy.

These gram flour pancakes are crisp and light and benefit from the extra kick provided by the seasonal spring onion and various spices. 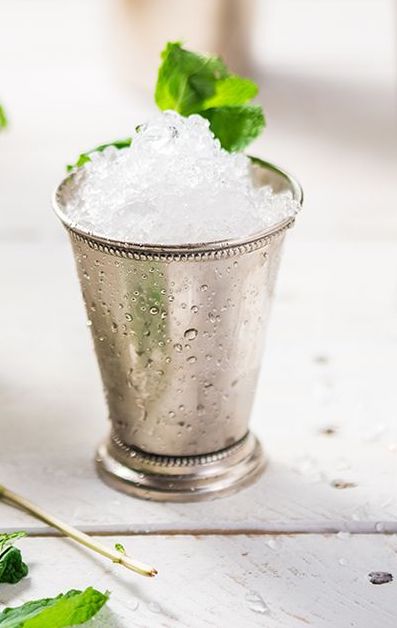 Mint is at its most prolific during the month of May, with the fresh, sweet leaves bursting with menthol flavor. The herb is fantastic sprinkled on new potatoes, added to pea soup, or crushed to add zinginess to this classic bourbon cocktail. Best enjoyed on a veranda in Kentucky. 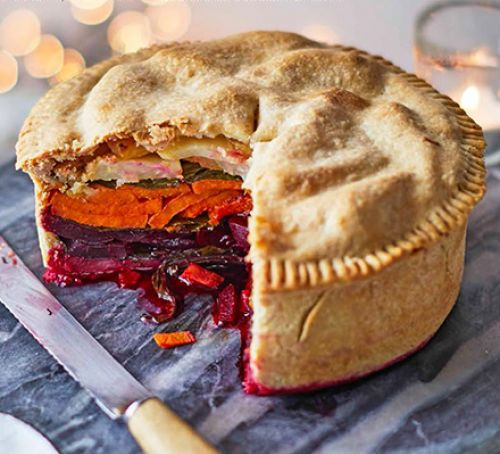 Spring veggies are layered into this vegan pot pie.

The humble dairy-free spelt shortcrust casing of this pie belies a rainbow layered interior filled with Spring produce, including Swiss chard and beetroot. 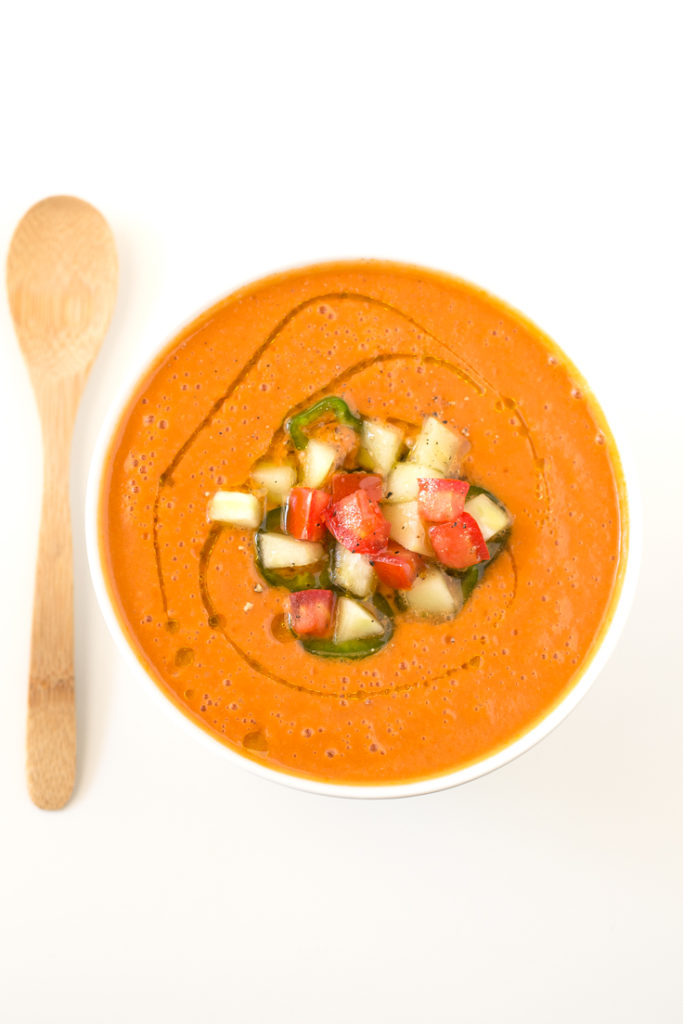 This creamy vegan gazpacho has a kick.

Cold soup can be a divisive subject and some people just can’t enjoy soup unless it’s piping hot. But for more adventurous soup suppers, when the hot weather cometh, ripe, tangy tomatoes twinned with peppers and cucumber is a gorgeous lunch. It is also the last phrase ever uttered by Arnold J. Rimmer before his demise. 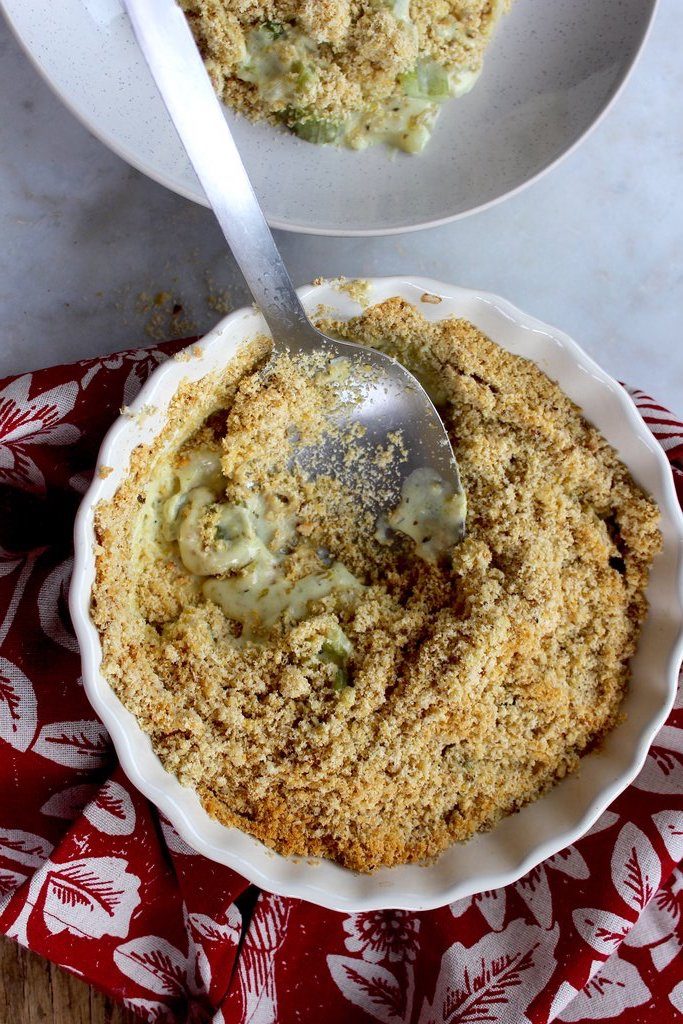 Make this vegan celery gratin for a hearty spring dinner.

May is prime celery season and this recipe makes use of the stalk’s astringent edge by combining it with creamy cashew sauce and a crumbly topping. 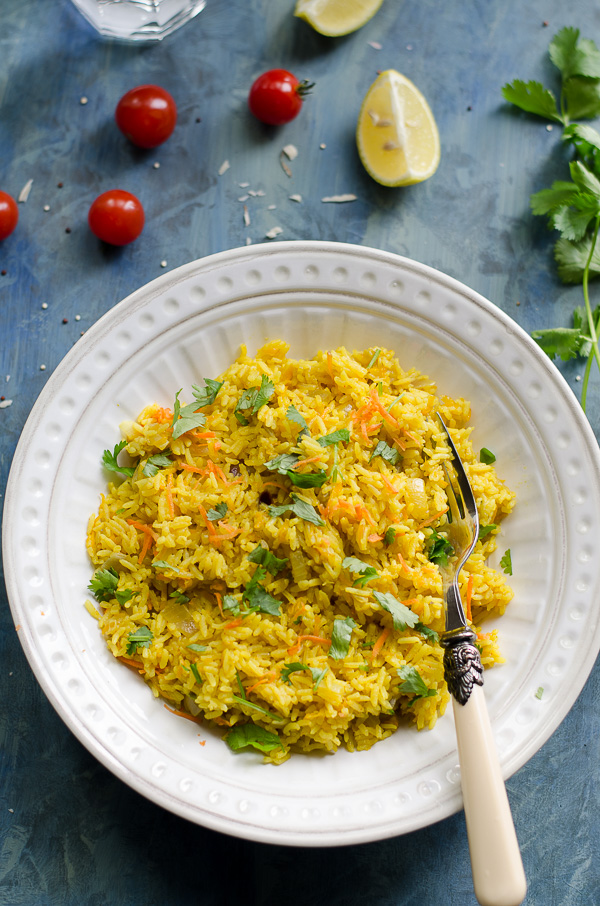 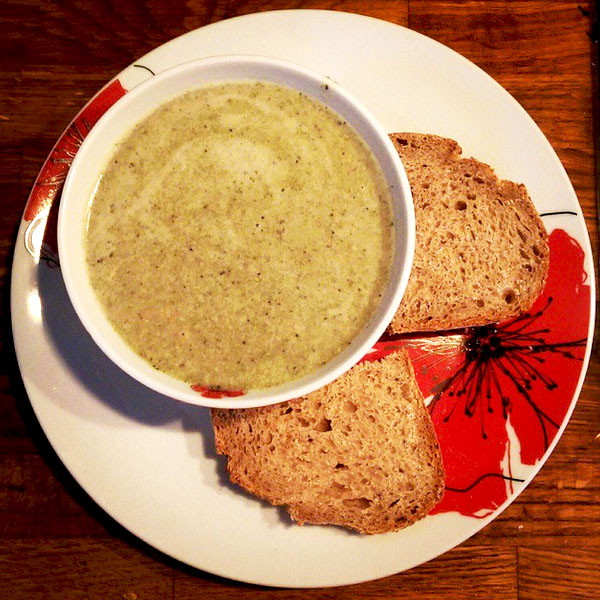 Broccoli goes fantastically with cheese and this recipe marries the complementary flavors in a hearty chowder thanks to a helping hand from nutritional yeast. 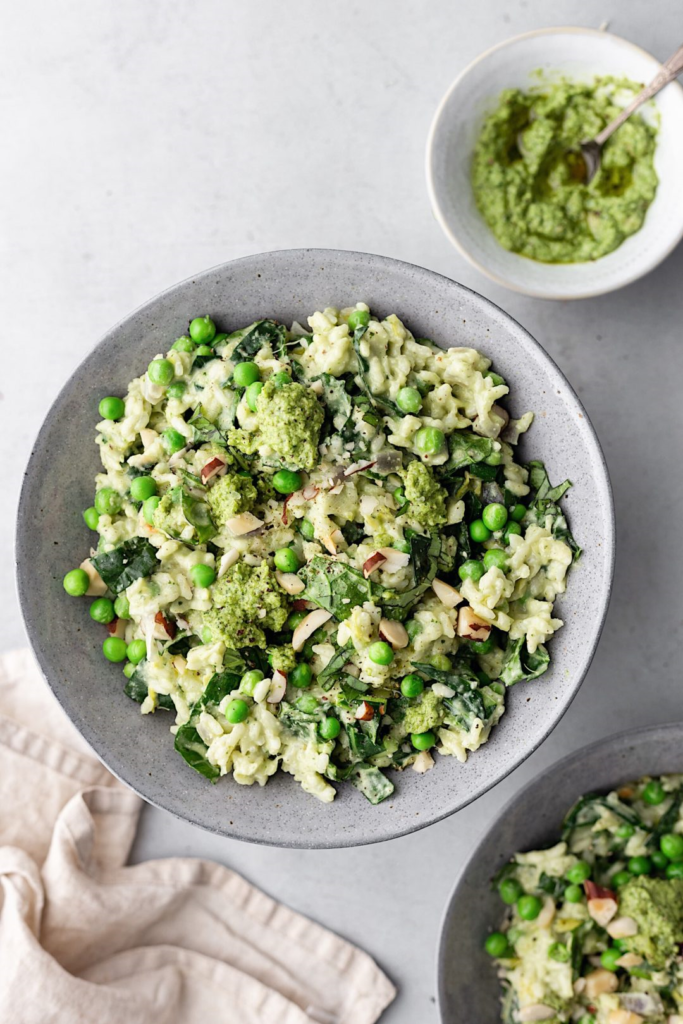 Spring flavors burst through in this vegan risotto recipe. 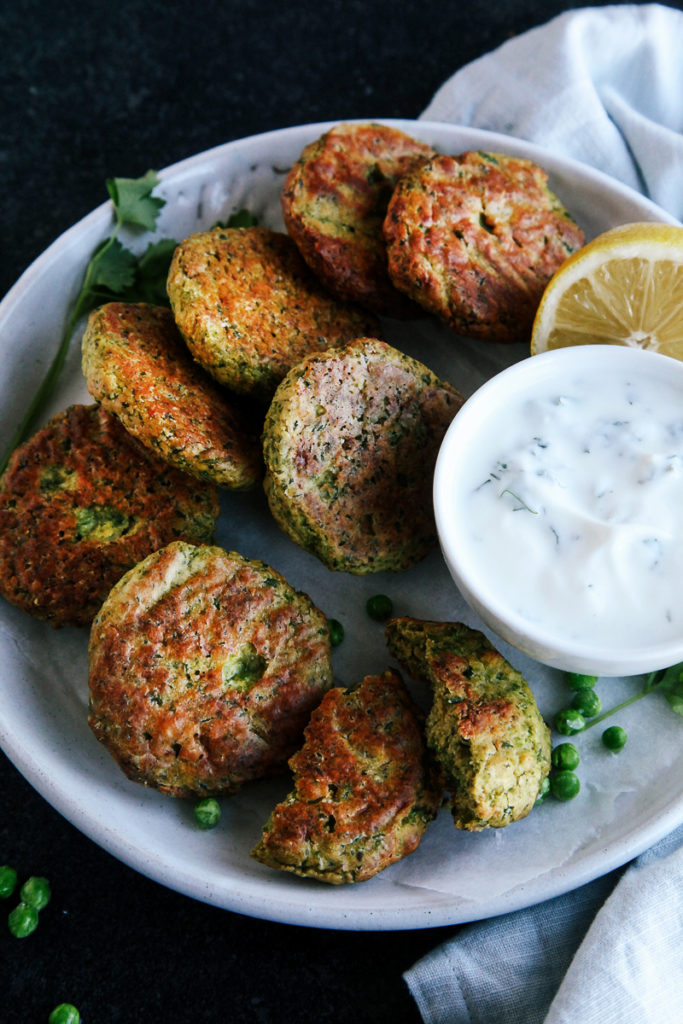 Fry up sunshine in this vegan pea fritters.

Peas are literally bursting from their pods during this month, the sweet little orbs are just begging to be gobbled up. This dish obliges by blending the peas with herbs and onion before baking them to make the gluten-free chickpea flour fritters crisp. 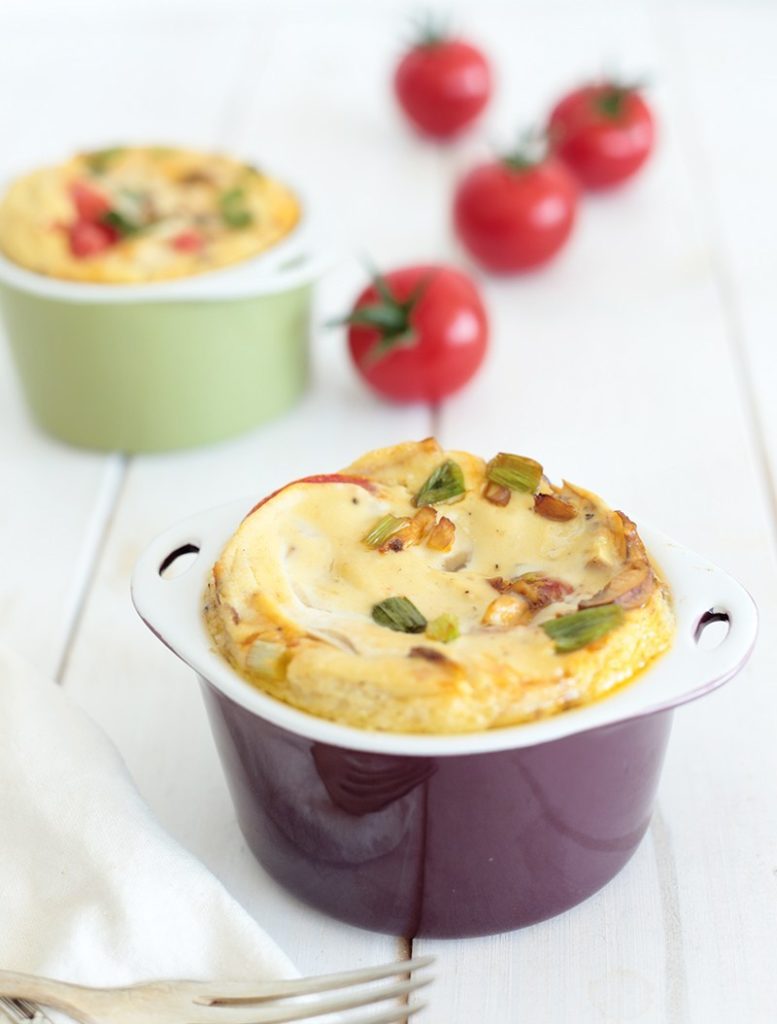 In baking, eggs can be replaced with ingredients ranging from flax seeds to apple sauce, and for overtly eggy recipes such as Spanish tortilla, there are vegan egg products, such as Just Egg. This recipe gets creative with silken tofu and nutritional yeast for a fluffy, savory snack.

Nothing says spring quite like this vegan asparagus salad.

Fresh asparagus won’t be here for long, so why not enjoy the lush little spears to their fullest in this tasty, tahini dressed salad. 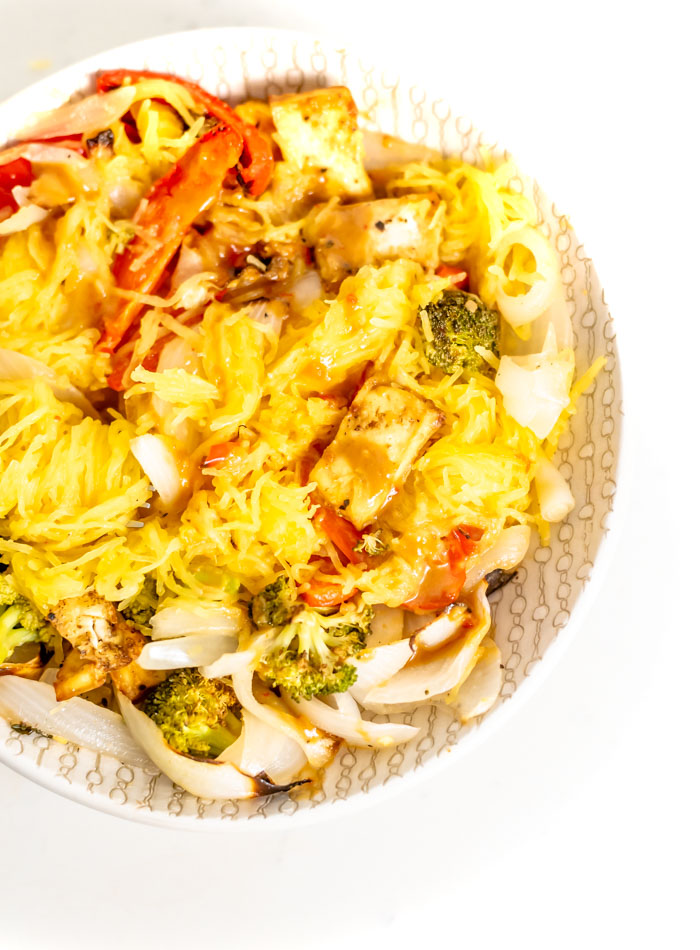 Spaghetti squash subs as pasta in this perfect vegan dinner.

These yellow squashes can look a bit like honeydew melons, but when cut open, nature’s noodles spill forth. This punchy recipe cooks up the squash’s insides with pan-fried veggies, tofu, and an almond butter satay sauce. 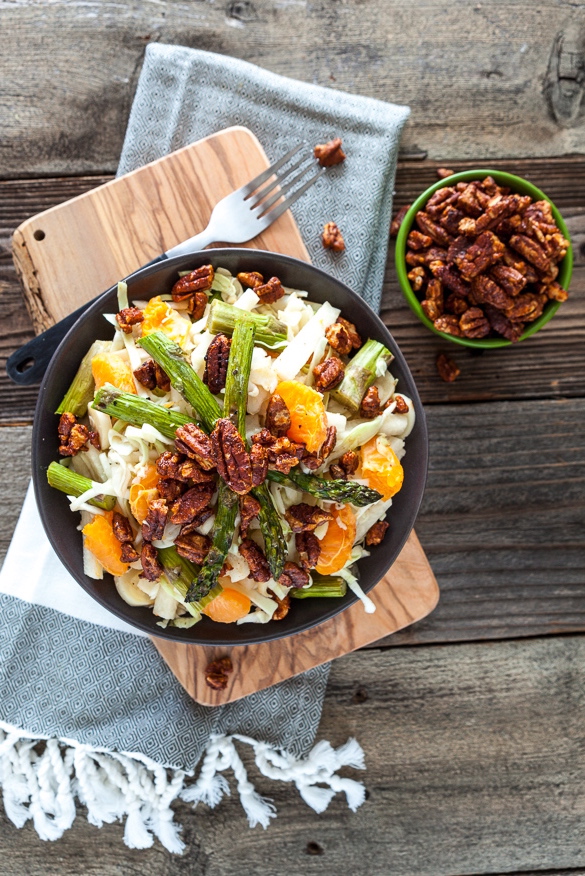 This vegan spring salad has everything – literally.

Combining tropical palm hearts with western asparagus, this recipe is a medley of flavors and considerably more interesting than a standard garden salad thanks to spicy-sweet pecans. 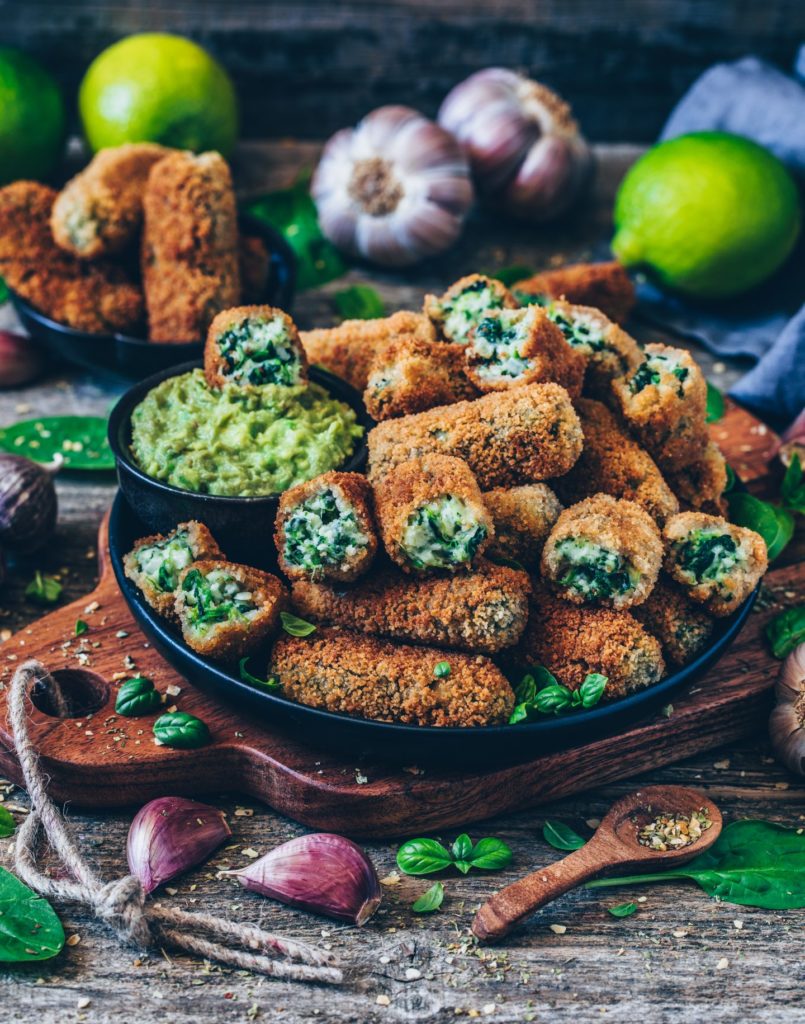 Spinach gets a crisp makeover with the perfect vegan dipping sauce.

Although spinach is available throughout the year, the most tender crops are gathered during the Spring. These croquettes offset the leaf’s bitter tang with a dairy-free bechamel sauce before taking things one step further by coating the rounds in breadcrumbs and frying. 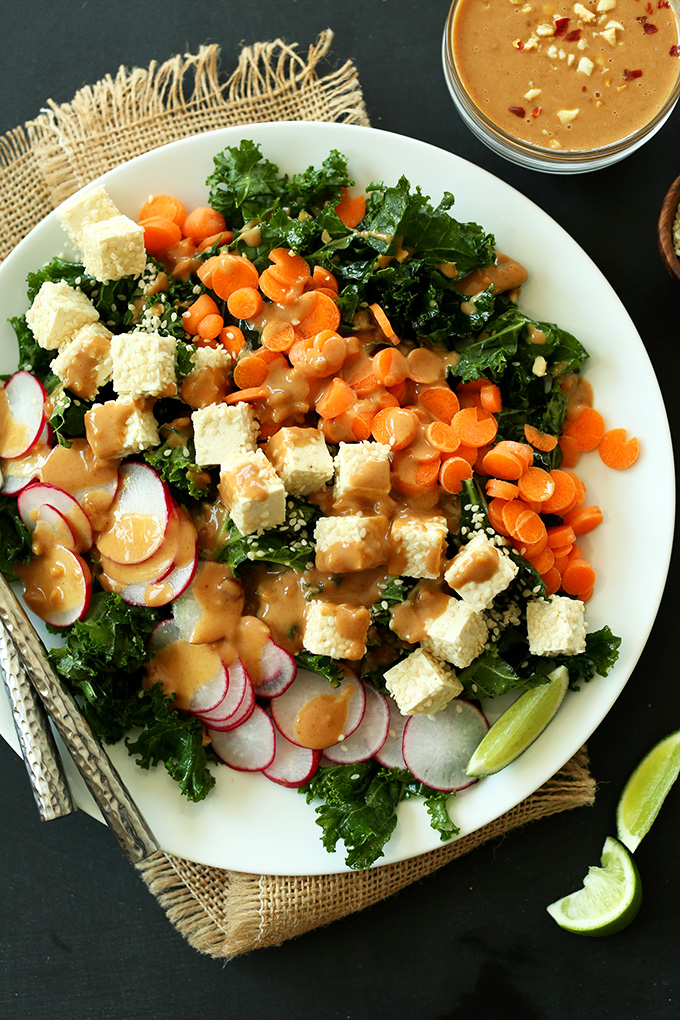 This crisp salad is full of iron and plant-based protein thanks to the sesame coated tofu and peanut sauce. 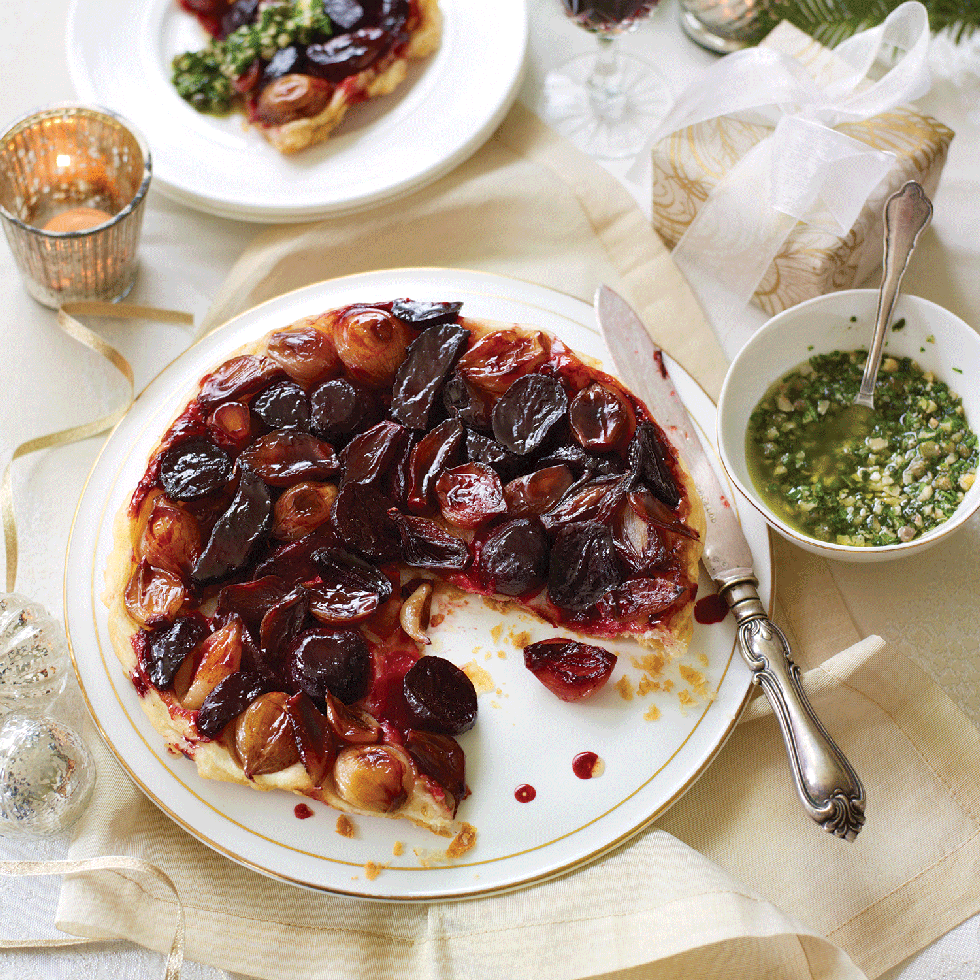 Shallots and beets shine in this vegan tartine.

Proving Tarte Tatin is not just for the dessert course, this recipe enhances the beetroot’s sweetness with balsamic vinegar and adds a nutty herb dressing. 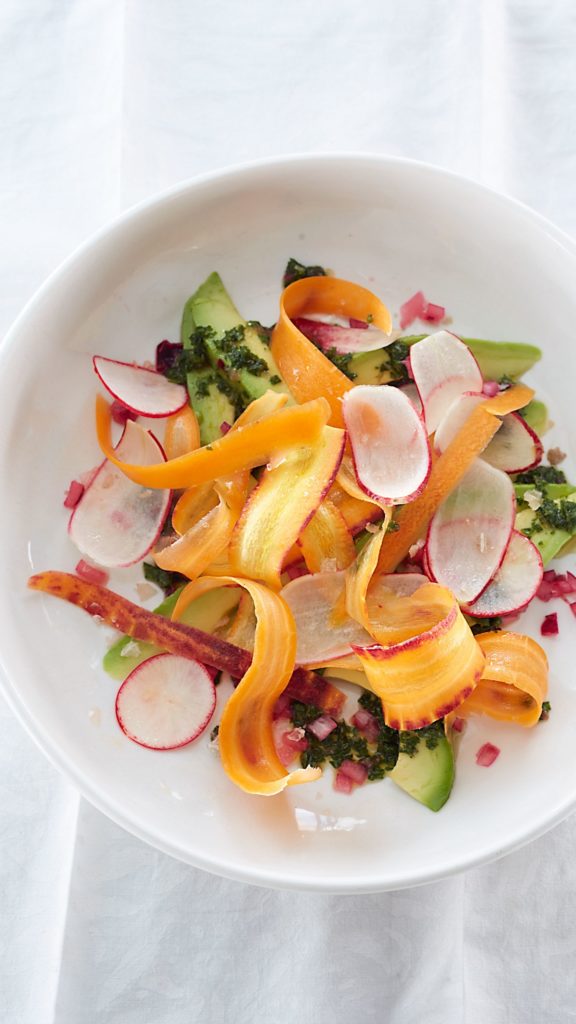 It’s not spring without radishes and this vegan avocado salad is bursting with them.

20. Avocado with Radish and Carrot and Pickled Onion

This colorful dish is surprisingly simple to make and includes creamy avocado, fiery radishes, and shaved carrot. The onion is soaked in lemon juice as a less acidic alternative to vinegar. 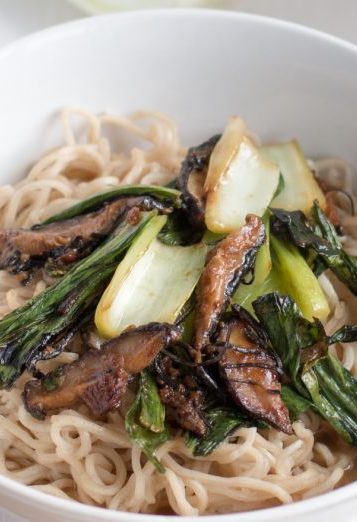 Ramen gets a vegan makeover with mushrooms and greens.

Japanese ramen is something of a hybrid dish in that it’s satisfying enough to be comforting but light enough to be enjoyed in all weathers. This recipe uses seasonal shiitake mushrooms and miso for an intense umami broth. 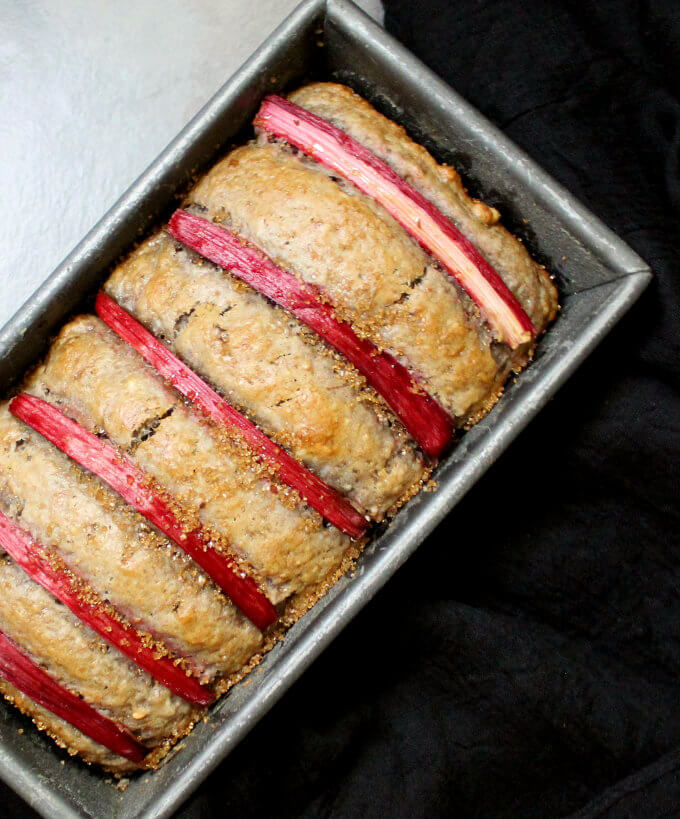 Vegan rhubarb bread is here…but not for long.

These vibrantly colored stalks are at their best during the Spring season, offering their tart zing to crumbles, pies, and cakes. This recipe uses poached rhubarb to add moisture to the nutty loaf. 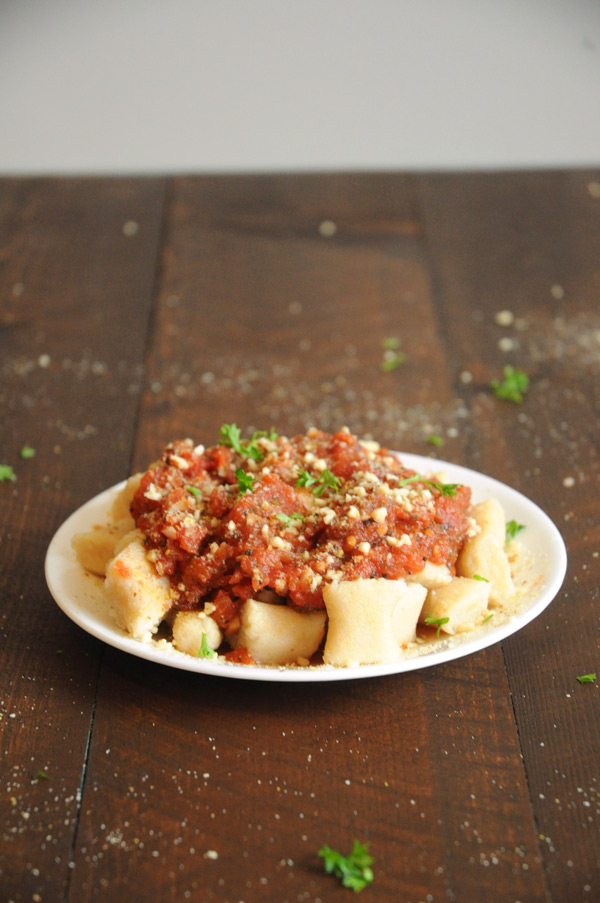 Everyone loves vegan gnocchi. And this one is especially simple.

Dumplings of joy, this recipe recommends putting marinara sauce on your potato parcels. 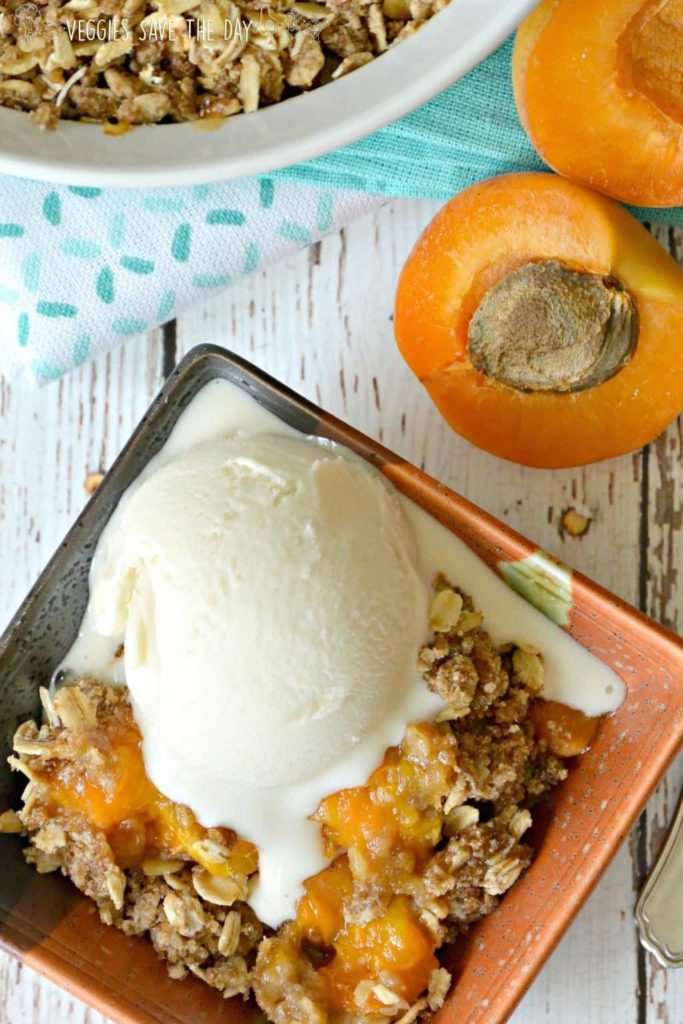 Sweeten your spring with this vegan apricot crumble.

Although dried apricots are a common ingredient in all manner of dishes from tagines to energy bars, the coral colored fruits can be enjoyed fresh during the Spring. This recipe tops the apricots with an oaty crumble layer. 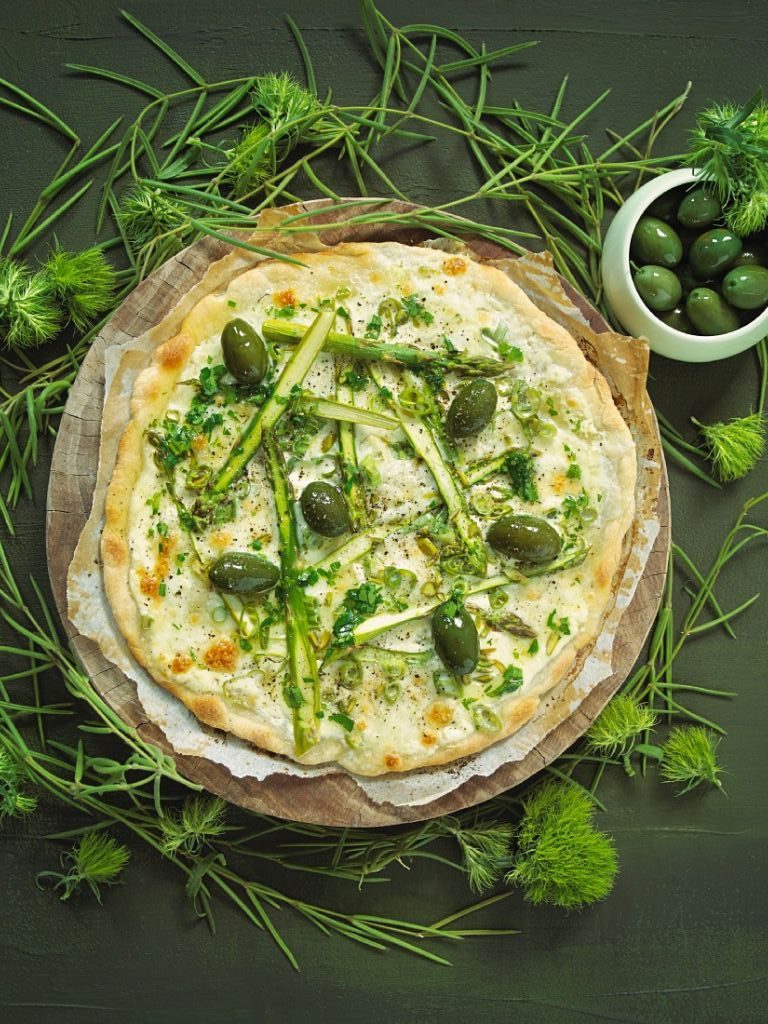 Yes, you need asparagus on your vegan pizza.

In years gone by, asparagus was renowned as an aphrodisiac, and it is also an excellent source of Vitamin K as well as the amino acid asparagine which is needed for neural function. In addition, it is delicious so putting the fresh stems on a vegan cream cheese topped pizza seems a very sensible course of action. 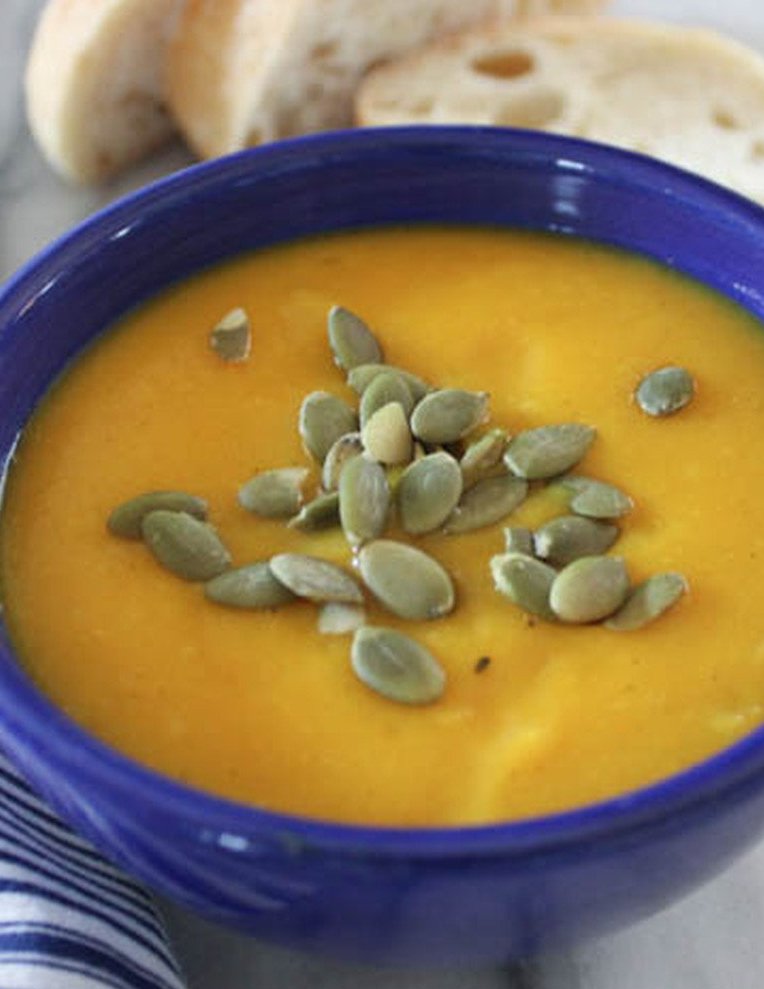 If you think spring is all about the crunch, let this creamy vegan kohlrabi soup have a go.

Sometimes called a German turnip, the knobbly kohlrabi has an earthy, slightly nutty flavor which is brought out by this soup’s use of turmeric and cumin.

Originally from China, the kiwi fruit spread to New Zealand in the early nineteenth century. Juiciest during the Spring season, the kiwi in this recipe sits atop a banana-cashew cream filling on a date and nut base. 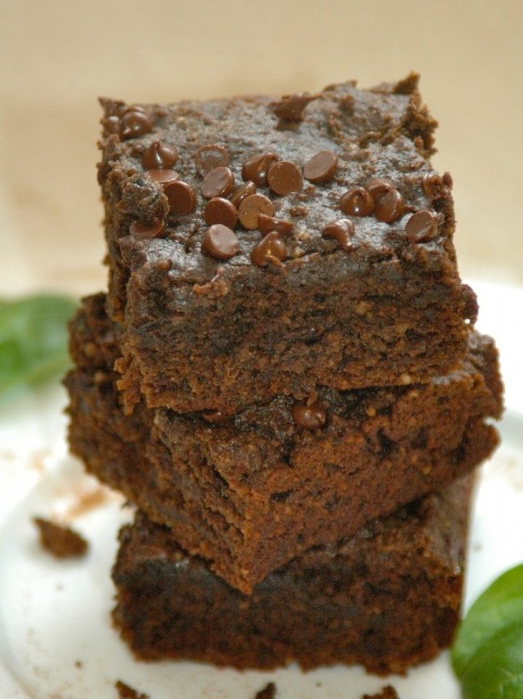 Spinach is in this vegan brownie recipe. You’re welcome.

Making brownies a health-food, this recipe uses calcium-rich spinach to add piquancy and texture to the dense chocolaty squares. 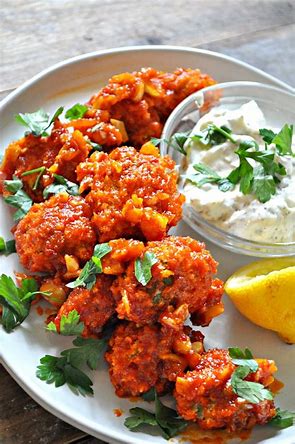 Let the veggies do the talking in this vegan buffalo cauliflower recipe.

Brussels sprouts are high in Vitamin K, Folate and Manganese and have a slightly acerbic flavor. Sometimes referred to as fairy cabbages, mainly by coercive parents during Christmas dinner, these leafy globes are sturdy enough to stay together when coated in panko and slathered in homemade Buffalo sauce. 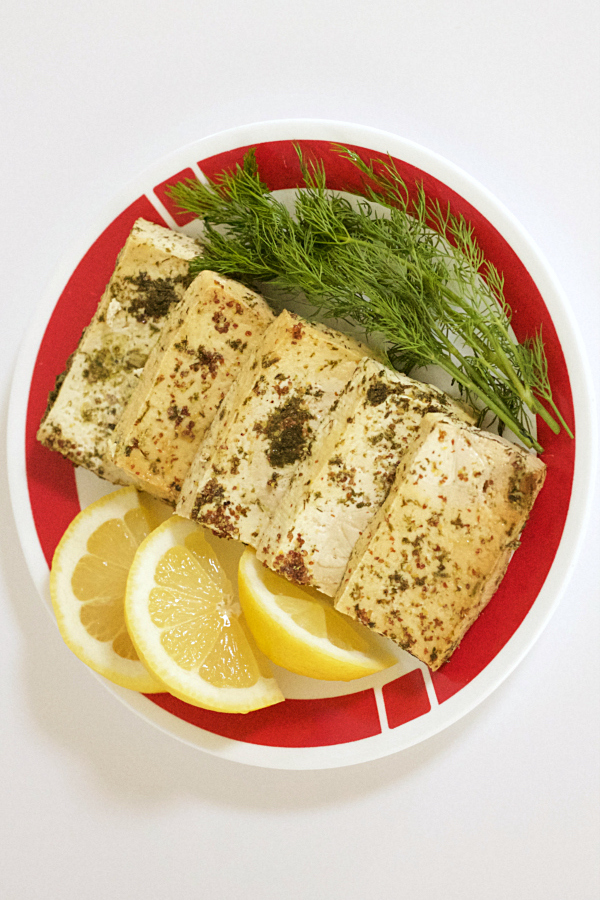 Is it even spring without dill in everything?

Combining sharp lemon with pungent dill, this slow cooker tofu recipe is simple and the final result works brilliantly as a main dish or as a sandwich filling. 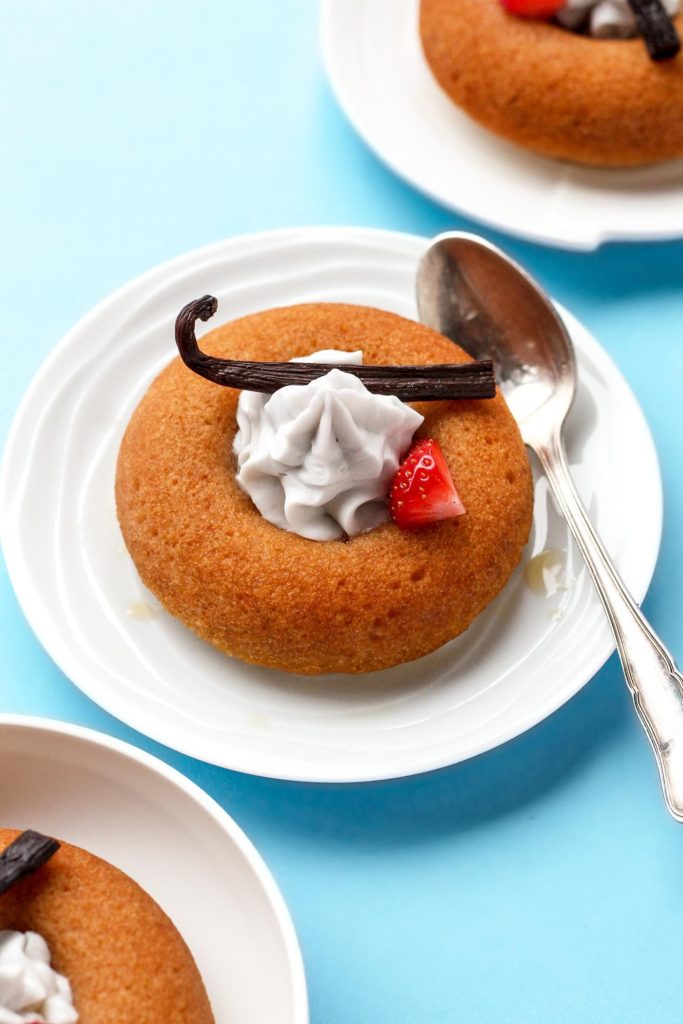 This popular dessert is a French appropriation of the traditional Polish yeast-cake called “babka.” Once French folk got their hands on the babka, rum, cream, and all things delicious were added for maximum indulgence. This gluten-free recipe uses rice flour and tops the booze-soaked cake with whipped coconut cream.