A growing number of Germans believe that cow’s milk is too unhealthy to drink, according to new research from the German Society for Consumer Research.

Does Milk Do a Body Good?

According to NutritionFacts.org, founded by “How Not to Die” author Dr. Michael Greger, there is growing concern surrounding the negative health effects of drinking milk.

One study linked regular milk consumption to a higher prostate cancer risk. Other research links the high levels of estrogen in cow’s milk to hormone-related conditions including acne and premature puberty. A diet high in saturated fat — including animal products like meat and dairy — has also been linked to lower sperm count. Dairy may also play a role in increased risk for asthma and high blood pressure.

The Oatly study speculates that switching to vegan milk is one of the first steps to a predominantly plant-based diet.

Dairy and the Planet

The study also found that 37 percent of Germans believe milk production has little impact on the planet. While many cut back on meat to reduce their carbon footprint, dairy also plays a big role. Cattle emit high levels of greenhouse gases, including methane, which is 25 times more potent than carbon dioxide.

Tobias Goj of Oatly Germany believes there’s room for improvement: “In view of the current developments in the global climate, we must create an awareness of what we eat and what it means for our planet.” 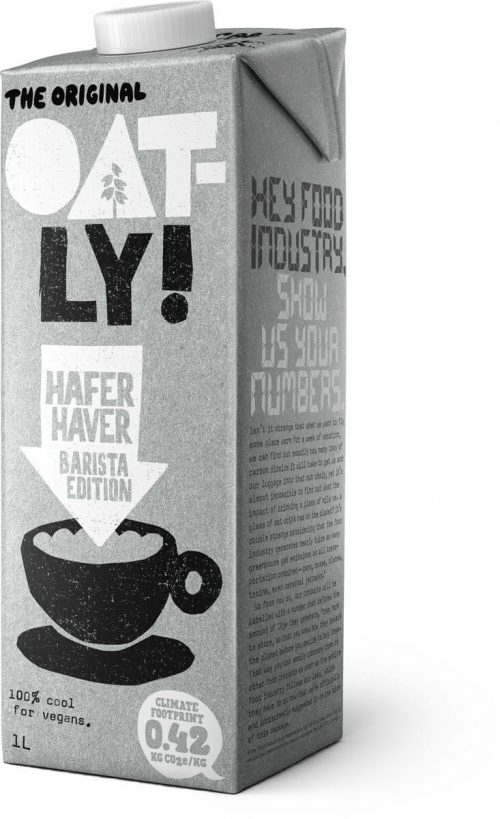 More Germans are choosing vegan milk for their health | image/Oatly

The Rise of Vegan Food in Germany

About one-third of the population doesn’t drink dairy or opts for vegan milk instead. It’s mostly the younger generation that chooses plant-based over traditional cow’s milk: one in five Millennials drink dairy-free compared to one in 10 for those over 60.

Germany was the previous world leader in new vegan food launches, according to Mintel data, responsible for 15 percent of global product releases between July 2017 and June 2019.

“The majority of consumers are not giving up meat; they are making room for more vegan products as part of ‘flexitarian’ dieting, opening opportunities for plant-based food and drink innovation,” said Katya Witham, Mintel global food and drink analyst.

The 2017 documentary “The End of Meat,” directed by Marc Pierschel, provided insight into the current German vegan food industry and the reasons driving the meat-heavy nation toward a more plant-forward diet.