Katherine von Drachenberg, better known as the one and only Kat Von D, is a renowned animal activist and vegan entrepreneur. After shooting to fame on the reality television show “Miami Ink”, Von D opened her own tattoo studio, High Voltage Tattoo. Ever since, her entrepreneurial efforts have been life-savers to animals (quite literally) and for consumers who desire quality vegan products.

In celebration of Von D’s 35th birthday, we’ve compiled a list of 35 reasons to show this strong and kind woman some love today.

1. She Speaks About Animal Rights Whenever She Can

Well, she’s clearly a natural at being a friend to animals.

2. She Speaks Openly About Veganism on Social Media

3. She Released a Liquid Lipstick Where 20% of Profits Go to Farm Sanctuary 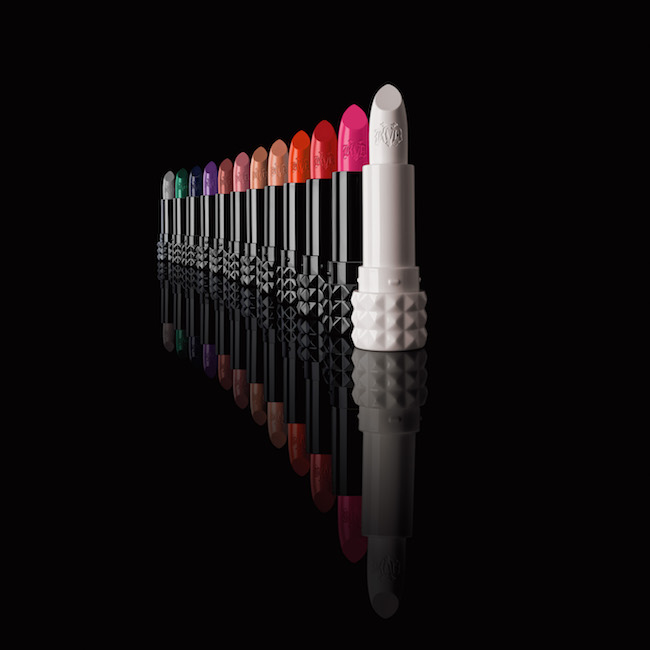 Be right back, just swooning over how Von D is the embodiment of kind and generous!

4. She Promotes ‘Adopt, Don’t Shop’, and Has 3 Adopted Sphynx Cats

This is our morning ritual. Nietzsche waits outside my shower like a little gentleman, and then demands at least 5 kisses. ? #crazycatlady #forever #bestadoptionever #pleaseadoptdontshop #happysabbath

If the purring is anything to go by, these two have a deep mutual love for each other! Don’t even get us started on her other two feline babies.

5. She Shares The Importance of Communicating About Veganism Effectively

To all my #vegan friends: I’m just about finished reading this book, and man! there is so much useful insight on how to best communicate the animal rights message. In my own humble opinion, I think there are a lot of well-intentioned vegans out there who, without knowing it, end up pushing people away from the cause, simply by how they communicate. I remember back when I was NOT a vegan, and how turned off I’d get by the overbearing vegan – even though I’m sure a part of what they were preaching made some sense to me. This book is really helping me understand how much more effective I could be if I took some of these ideas into consideration. Anyway, today, I’m sending EXTRA LOVE to all my #vegan animal rights activist friends as well as all of my non-vegan friends who may be considering the change. ?

OMG! @projectchimps just sent me this cute video after having received the check for $256k! We obviously couldn’t have raised that much money without everyone’s support! So, thank you to everyone who purchased the @katvondbeauty #ProjectChimps lipstick! ❤❤❤ Because of you, these amazing creatures get to live a safe, rehabilitated, happy life outside the walls of testing labs! #projectchimps #300chimps #animalliberation #animalrights #crueltyfreebeauty

You can buy one of the chimp-supporting lipsticks for yourself right here. 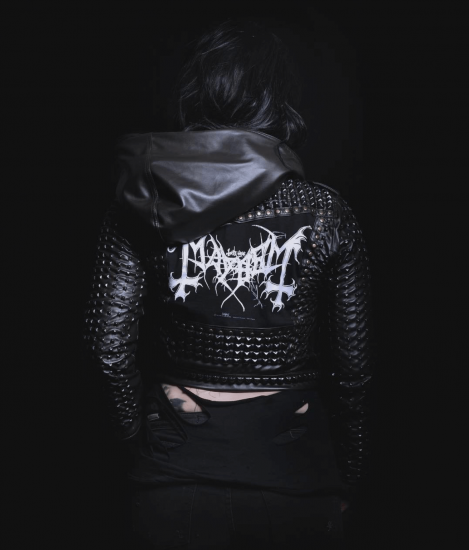 Von D doesn’t have the skin off anyone else’s back, on hers.

So excited about launching an entire #crueltyfree and #vegan line of makeup brushes for @katvondbeauty! [coming soon!] I’ve teamed up with my #KvDArtistryCollective artists to create the most effective brush formations, using the highest grade synthetic fibers that mimic the same product distribution you would get from animal-based bristles. We are living in amazing times right now where technology is making it so easy to make compassionate choices in the products we purchase, without having to exploit animals. ?I’m so fucking proud of my @katvondbeauty team for the relentless time + energy they put into backing me up in creating true cruelty free products and helping me spread the message. ? Lastly, I wanna thank all my followers who have transitioned their makeup kits to cruelty free. It makes me proud to call you guys my friends! ? #katvondbeauty #furfreeartistry #fuckanimaltesting #fuckfur #animalrights #truebeautydoesnothurtanimals

Phew! Consumers can put their makeup on happily- hair-free!

9. Her Beauty Brand Has Never Tested on Animals, and Never Will

Are lipsticks and eyeliners worth lives? 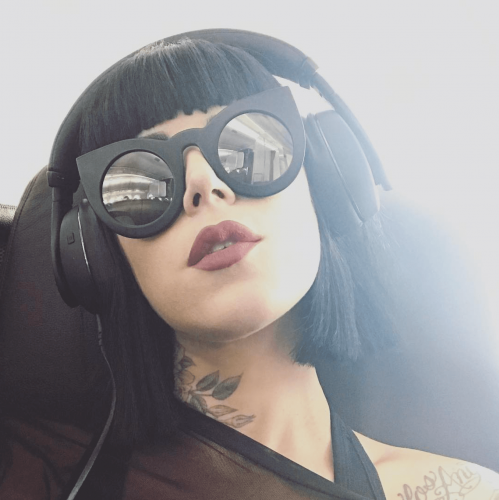 Listening to tunes isn’t the same without a swanky pair of vegan leather headphones, you feel? 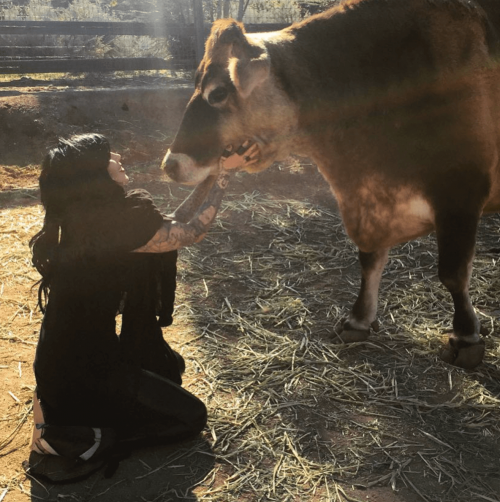 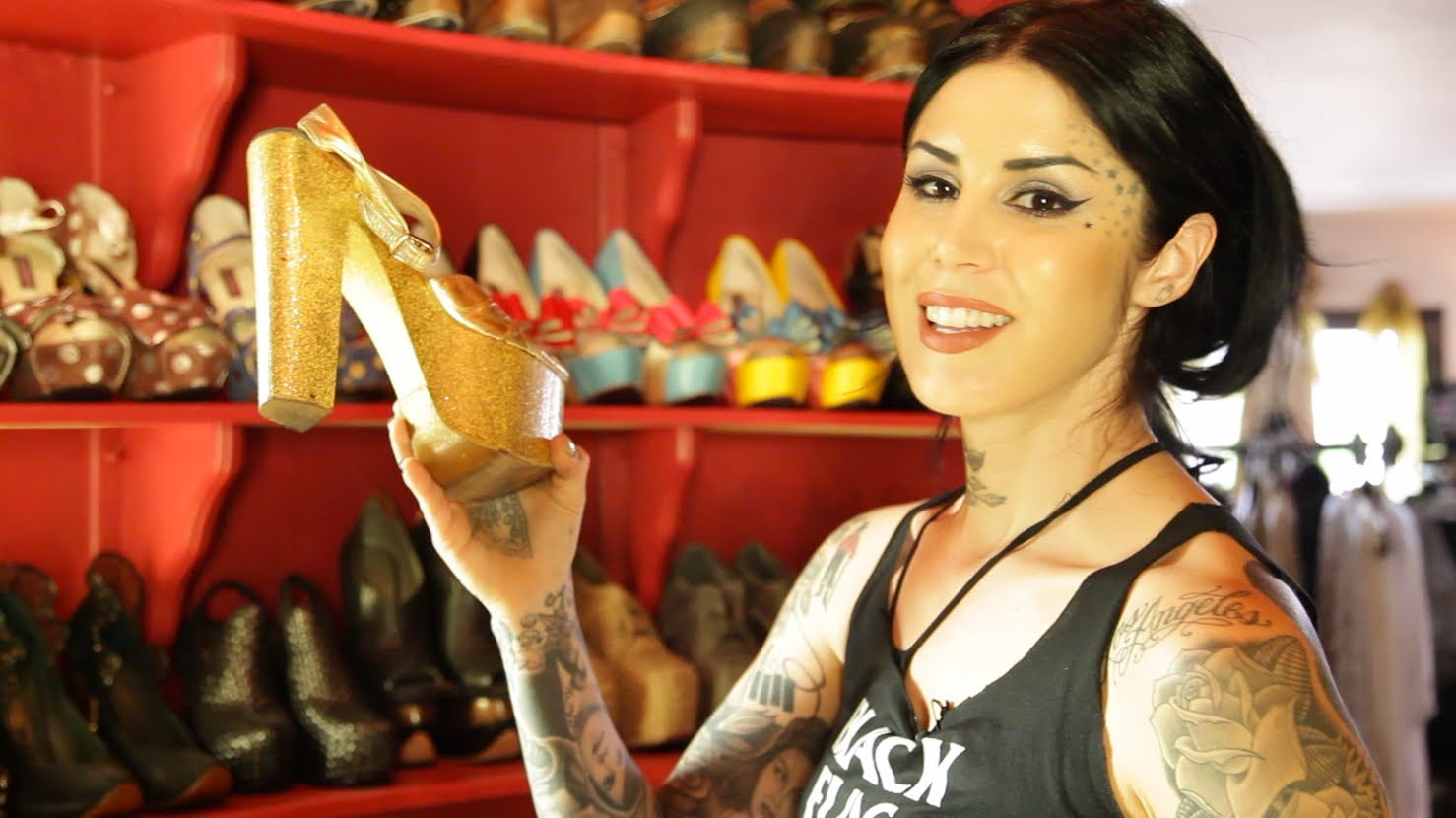 Most commonly known for her makeup empire and tattoo designs, Kat Von D is also launching vegan shoes! When there’s a creative vegan entrepreneurial opportunity, Von D goes for it!

13. She Spoke in Front of Thousands at Circle V

14. She Helps People Share Their Pet Adoption Stories With Tattoos

Had the pleasure of tattooing this portrait of Alex’s sweet pet-companion, Achilles! Can you believe someone abandoned this sweet baby and left him out to die?! When Alex found him outside his work, he was barely about a year old, malnourished and covered in deer ticks. Now, Achilles is such happy, healthy and definitely a ladies-man with that floppy ear! ?❤ Thank you, Alex, for sharing your story w me, letting me tattoo you, and for giving this beautiful creature an amazing life.

15. She’s Kind, Inclusive, and Accepts Everyone 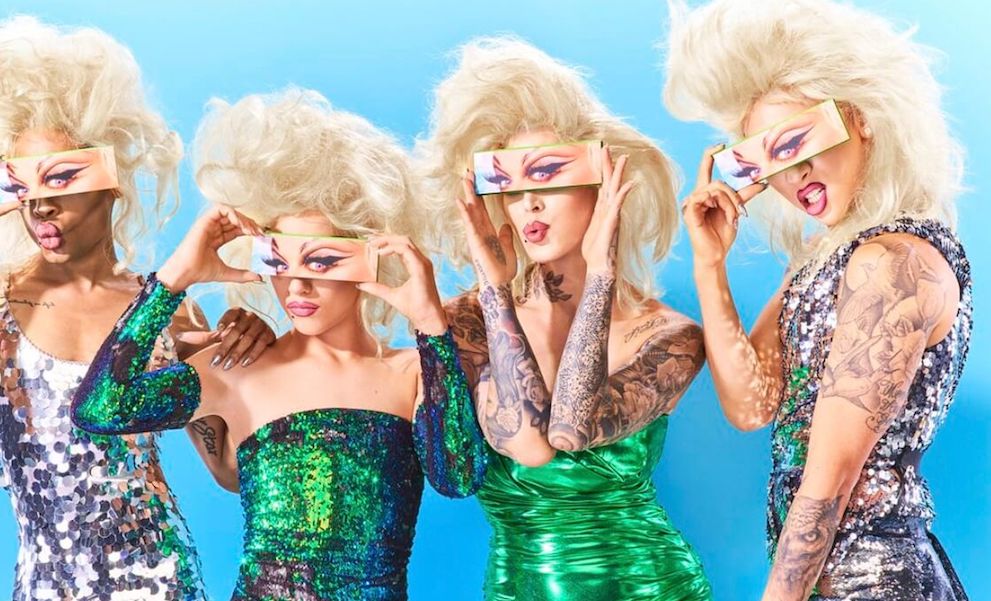 Animals aren’t the only ones Von D is a true friend of! 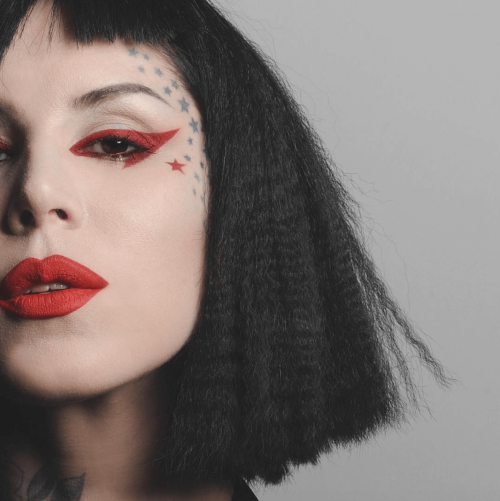 If there’s anyone that can pull off literally any makeup look – it’s Kat Von D herself! 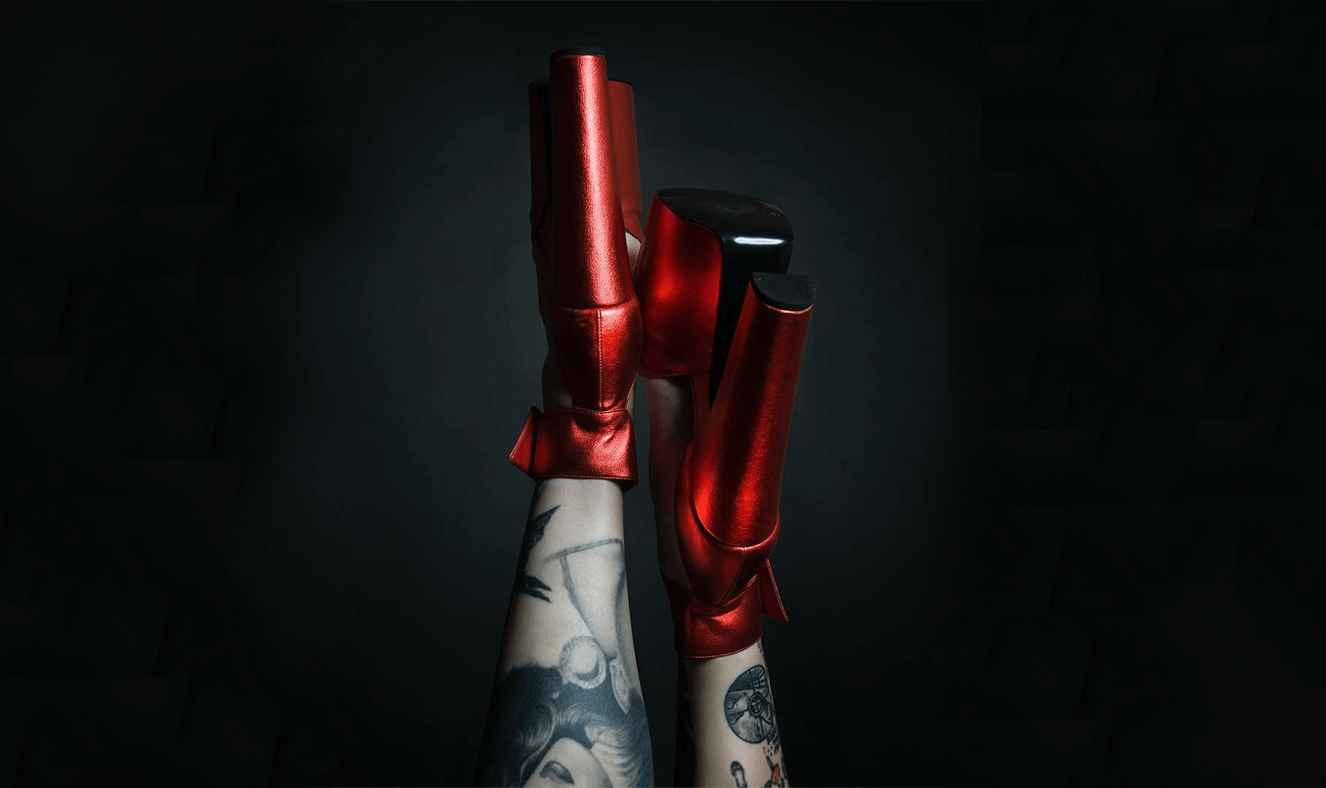 These definitely walk the line that balances kind and stylish!

Big shout out to one of my fave #vegan makeup brands: @blackmooncosmetics for making true #crueltyfree lashes that are actually comfortable to wear! ?? [ these lashes are called “Sagittarius,” and I’ve paired them up with my @katvondbeauty Shade+Light eye contour quad in “Plum” and Tattoo Liner in “Trooper” black]

The more the merrier!

19. She Asks People to Put Animals Above Celebrating Her Birthday

Before I go to bed, I just wanna thank everyone for making my birthday this year so special: all my friends who called, texted, sent me flowers – all my beautiful Instagram friends who posted the sweetest birthday wishes [seriously, some of those captions made my heart cry]- and an EXTRA special thank you to my sweet friends who instead of buying me things I don’t need, donated to @farmsanctuary in honor of my bday: @ndrewstuart @sassys8n @hellocoller @ginafrey ❤❤❤ that meant the world to me. Sweet dreams, darlings. X

20. She Cares for the Planet as a ‘Goth Gardener’

From my black garden: Black Peony Poppy [papaver somniferum] – this little bud is about to bloom into a large, tissue-paper like, ruffled explosion! **and yes, I’ll make sure to post the bloom in the next garden update! ? #blackgarden #blackflower #blackthumb #gothgardening #casavond

A beautiful form of self-expression.

21. She Keeps it Real When Discussing Animal Rights

Thank you to the audience member for asking such a question, and thanks to the entire audience for clapping for animal rights. ❤ #crueltyfree #crueltyfreebeauty #animalliberation #katvondbeauty #vegan

No sugar-coating or denial- just the facts.

22. She Provides Vegan and Cruelty-Free Lipstick Options for Everyone 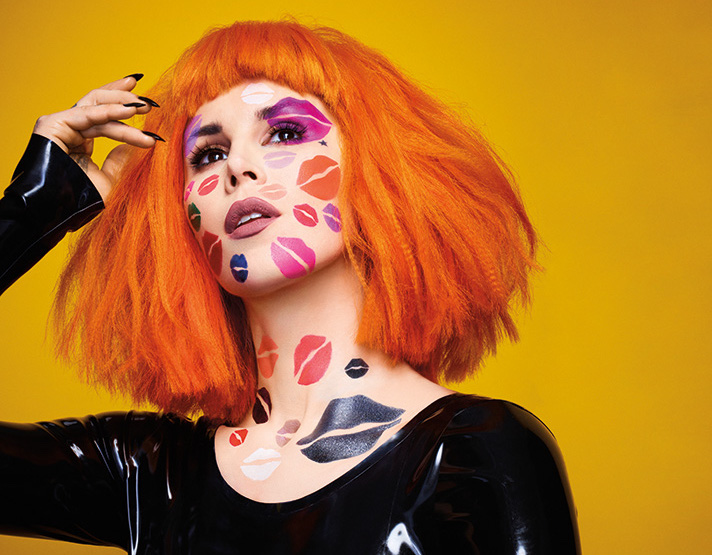 Will we ever run out of options? Plus, it’s cool to have lipstick without fish scales and crushed beetles.

23. She Hangs Out With Real Wolves

Taking a quick break from workin’ on my album w @davesitek to warm up Hank’s vocals. TURN THAT SHIT UP IF YOU LIKE SMILING! ? #wolvesdoitbetter #duet #itsahit

24. She Breaks the Stigma of Tattooed Women 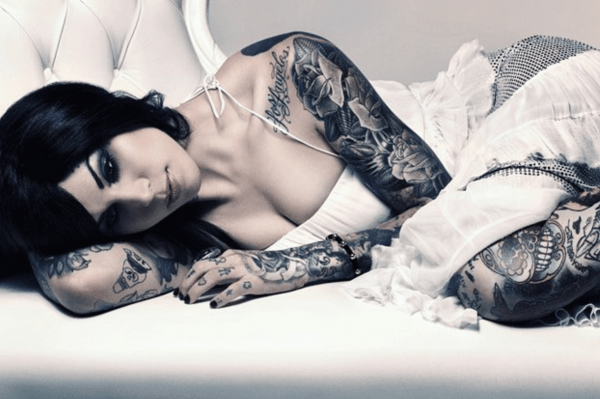 Ever heard the stereotypes that tattooed women won’t get jobs, can’t be successful, or that people will have prejudices toward them? Think again; Kat Von D is living (and thriving) proof that dreams do come true regardless of personal choices on physical appearance. Tattoos can make people feel empowered by their bodies, and she rocks her body art!

@Prayers took this photo of me drawing in our dining room, while I wasn’t looking. I‘m not scared to admit I haven’t made the best choices when it comes to past relationships. Looking back, it’s obvious I was always trying to adore someone the way I deserve to be adored [but wasn’t]. So, I have no shame when I say @prayers has really schooled me. Everyday, this man is showing me what true + unconditional love is, and I’m just so damn lucky. When I looked up from my drawing, I saw @prayers looking at me – no makeup, no nails, no bra, no filter – just me. The real me. And all I could see was his Love. Thank you, Rafael, for teaching me how to be loved for the first time. X

Von D sets a wholesome and positive example for people everywhere. She shows that wearing makeup, styling different outfits, and expressing yourself is a-okay, in the same sense that being free of makeup, editing, and false enhancements is also brilliant. People needn’t feel obliged to aspire to unrealistic perceptions of beauty. 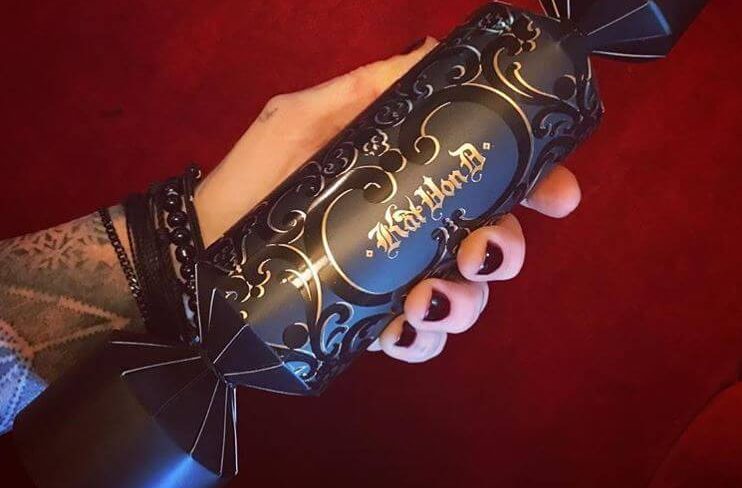 Ah hello, who wouldn’t want one of these in their stocking?!

27. She Stood Against Animal Testing When NARS Wouldn’t 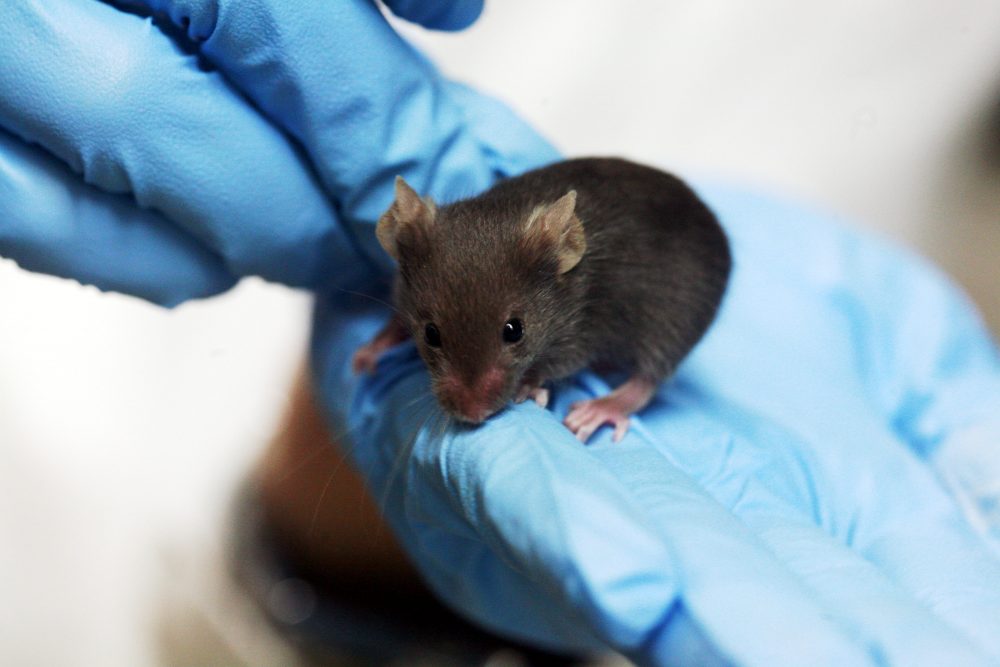 In a passionate Instagram post (warning: graphic content), Von D told the world of her disappointment about NARS’ controversial decision to test on animals. If the company won’t stand up for animals, someone with a large platform should – thanks, Kat!

Off to find me some stop signs now. ?

Animals are what drives Von D to make a difference, and she is doing a very good job of that.

29. She is Proud That Veganism Changed Her

Kat believes once you go vegan, there ain’t no going back! Certainly, this is a view shared by many and Von D is more than happy to spread awareness.

30. She Teams Up With Big-Name Celebrities To Help Spread the Vegan Message 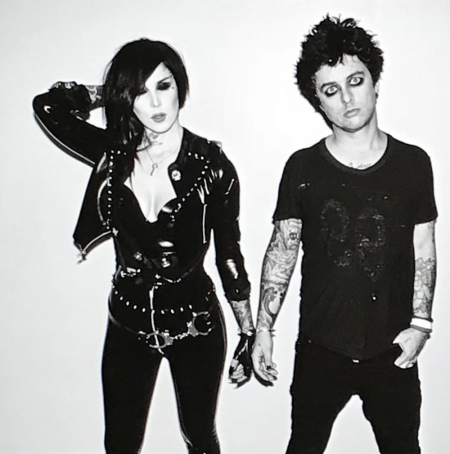 When Kat Von D teams up with Greenday’s frontman – all the good things happen!

31. She Applauds Other Companies for Saving Animals

Round of applause to @gucci for announcing that they are officially no longer using fur, starting Spring/Summer 2018! For a brand at this level to make such big changes speaks volumes, and I’m so fucking excited to see other designers follow suit! An extra big hug to all of my friends+followers who boycott purchasing fur – because as we all know, the power has always been in the people. What we choose to spend our money on directly dictates what products are produced – and bottom line is: cruelty is NEVER in fashion. ***on that note! I’m proudly wearing my new fave @katvondbeauty lipstick shade called “Hilda.” This shade is from the upcoming #FarmSanctuary collection – and proceeds will benefit @farmsanctuary! ? #fuckfur #vegan #crueltyfree

A small step for any company is a big step for vegan kind. 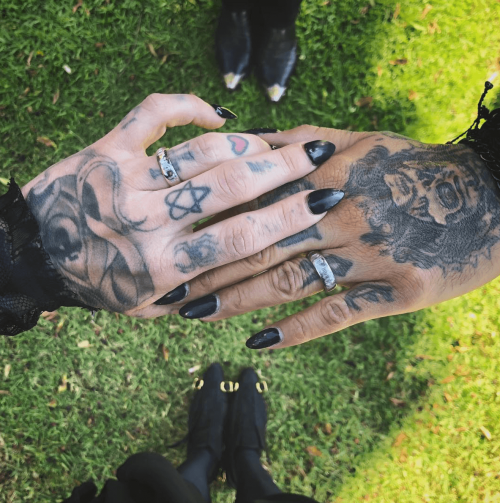 Cutest. Couple. Ever. Please, keep eating plants together for eternity.

33. She Featured in the LAIKA Magazine, Saying Veganism Has Become Her Mission 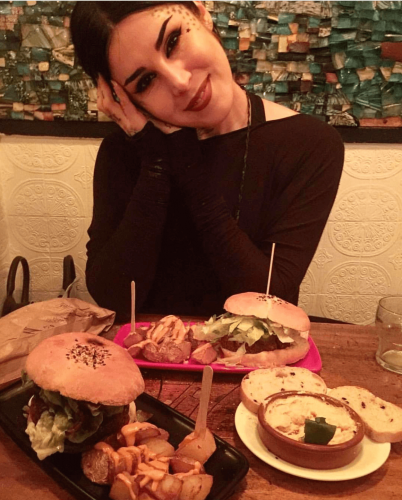 And there won’t be an animal who isn’t grateful for her efforts.

34. She Volunteered at an Animal Sanctuary With Her Team on Her 34th Birthday

You KNOW you have the best beauty team when everyone is so damn excited to get up early to go volunteer at @farmsanctuary on a rainy day before prepping for Imats. I love my @katvondbeauty team SO MUCH, for caring about the animals, the environment, and humanity – more so than makeup! ❤ #farmsanctuary #beautythatgivesback #crueltyfree #vegan #animalrights

Parties are overrated, contributing to the wellbeing of animals is the new party. Or, has it always been and the world only came to a realization when Kat Von D made it look downright fantastic?

35. She Inspires Others to go Vegan

Please know that I say the following with nothing but LOVE: If I could ask for one gift this year, it would be for my friends and followers to consider leaving animals off their plate this next year. I’m not asking for you to turn vegan, but to just simply CONSIDER it would be a big enough gift.❤ Fun fact: A person eating a plant-based diet saves between 371-582 animals per year. #love #friendsnotfood #justcuzwecandoesntmeanweshould #govegan #newyearsresolution #animalliberationishumanliberation

They say it takes a village to raise a person. Well, it only takes one to inspire a village. In regard to veganism, it’s fair to say Von D has inspired and continues to inspire the equivalent to a large number of villages! Keep up the kindness, Kat!