Ocean Hugger Foods, a vegan seafood company known for their tomato-based Ahimi tuna, made a surprising PSA on Instagram regarding sushi. According to a study published in 2017, nearly half of all sushi tested in Los Angeles sushi restaurants did not match the species listed on the menu. This goes way beyond imitation crab.

Researches from UCLA and Loyola Marymount University surveyed 26 sushi restaurants in LA between 2012 and 2015, recording the DNA of each fish item offered. The study found that 47 percent of the fish was incorrectly labeled on the menu. The research found that halibut and red snapper were always mislabeled, whereas the chances of mislabeling salmon dropped to about one in 10. Similar results were also found during the study’s one-year survey of high-end grocery stores.

“Half of what we’re buying isn’t what we think it is,” said Paul Barber, the senior author of the study, as well as a UCLA professor of ecology and evolutionary biology. He continued, “Fish fraud could be accidental, but I suspect that in some cases the mislabeling is very much intentional, though it’s hard to know where in the supply chain it begins. I suspected we would find some mislabeling, but I didn’t think it would be as high as we found in some species.” 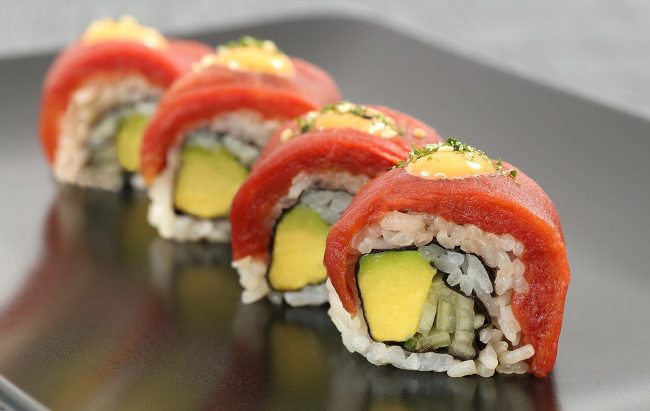 The issue extends beyond restaurants trying to make an extra buck. According to UCLA researchers, it introduces environmental and overfishing implications, as well as posing a risk to consumers who may be allergic to certain fish. For example, four out of 10 halibut orders were found to be an either overfished or “near-threatened” species of flounder. Other endangered species were also unexpectantly found on the researchers’ plates.

Ocean Hugger is on a mission to offer a more sustainable, healthier, and cruelty-free option to sushi-lovers. The start-up company’s inaugural product, Ahimi tuna, has secured impressive reviews amongst chefs, restauranteurs, and consumers alike. The tomato-based product is meant to replicate raw tuna, and it is sold in a variety of applications, from simple nori and rice to poke-style bowls. Ahimi tuna is currently sold in Whole Foods Markets across the eastern half of the US, but the company is actively working on a national expansion, as well as partnering with restaurants and catering corporations, such as Aramark. Ocean Hugger Foods wants to ensure that no consumer gets jipped when ordering sushi, or worse, unknowingly eats an endangered species.