Forget Christmas, Thanksgiving, Valentine’s Day, and July 4th. The most important holiday of the year—I’m sure we can all agree—is May 4th. Also known as Star Wars Day. Also known as May the 4th be with you.

The franchise can be easily celebrated on this day with plant-based food, fashion, and following the vegan and animal-loving stars of the movies. Even the film itself features a particularly thought-provoking scene to do with the ethics of animal consumption.

Here are the five top reasons Star Wars is the most vegan franchise in the galaxy.

If you decide to honor May 4th with a good old fashioned duvet day and a Star Wars box set, you’ll be pleased to know a number of the onscreen stars are animal lovers and have used their platform to raise awareness of veganism and animal rights. 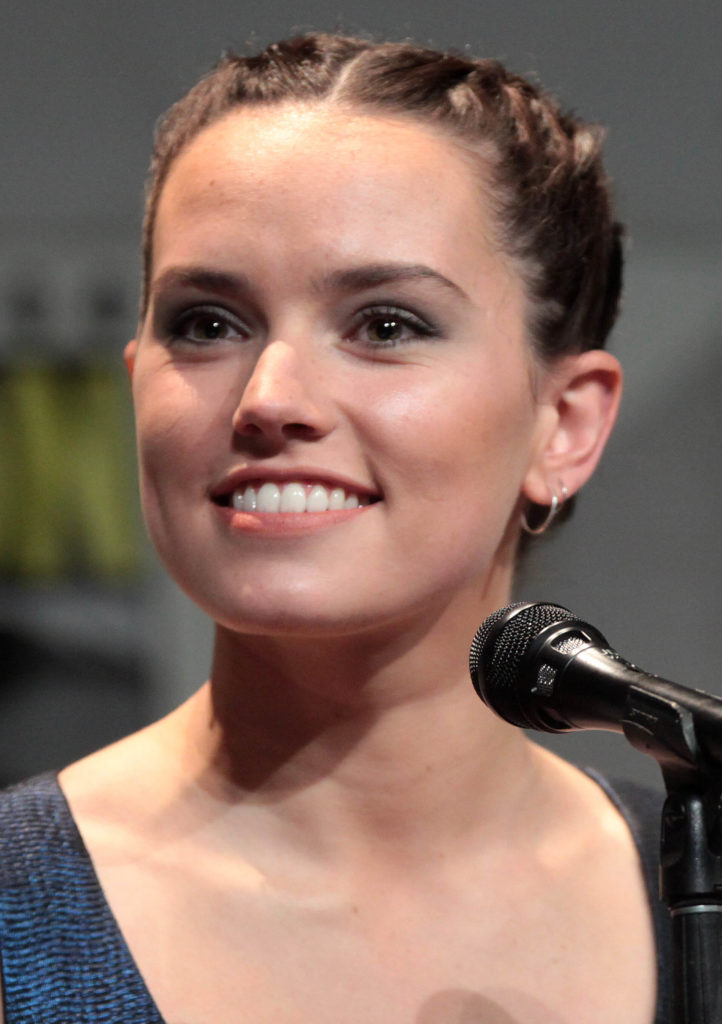 Daisy Ridley, aka Rey, is a vegan. | Wikimedia Commons

Daisy Ridley played Rey in 2015’s “Star Wars: Episode VII – The Force Awakens” and in 2017’s “The Last Jedi.” For the most part, she follows a vegan diet, however in an interview for Elle magazine she described herself as a “cheagan” (aka a cheating vegan). Acknowledging her contradictions she said, “I’ve cut out meat and dairy, and eggs; but I sometimes eat fish because my moral compass is off.” 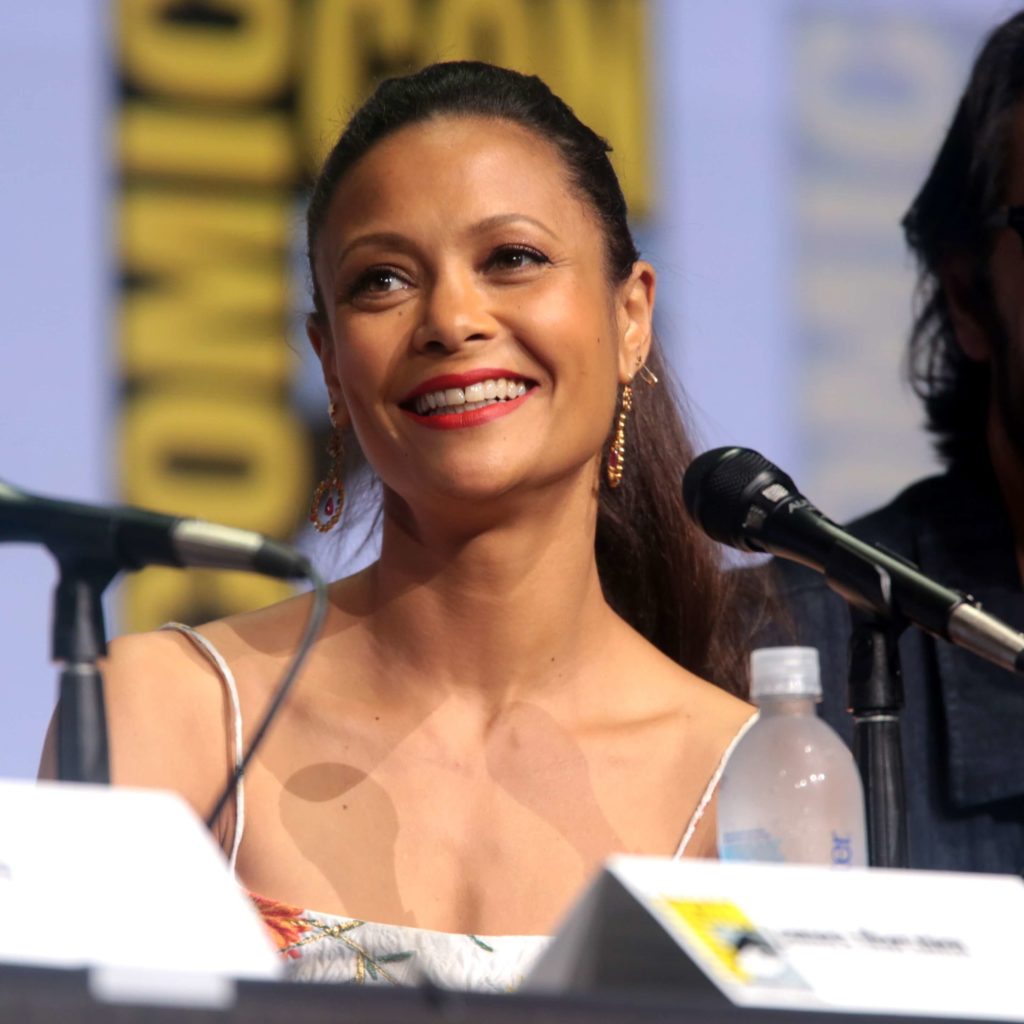 Thandie Newton, who played Val, has spoken out against foie gras. | Wikimedia Commons

It was co-star Woody Harrelson who persuaded Thandie Newton to give a vegan diet a go. Newton, who played Val in “Solo: A Star Wars Story,” is now a passionate advocate for veganism.

Last year, she spoke out against foie gras—a pate produced by force-feeding ducks and geese. She asked the UK government to ban importing the foodstuff into the UK, where it is illegal to produce.

She said, “the UK’s departure from the European Union allows the unique opportunity for Parliament to meaningfully depart from the grotesque foie gras industry. The law should reflect that if it’s too cruel to produce here, we shouldn’t welcome cruelty from elsewhere.” 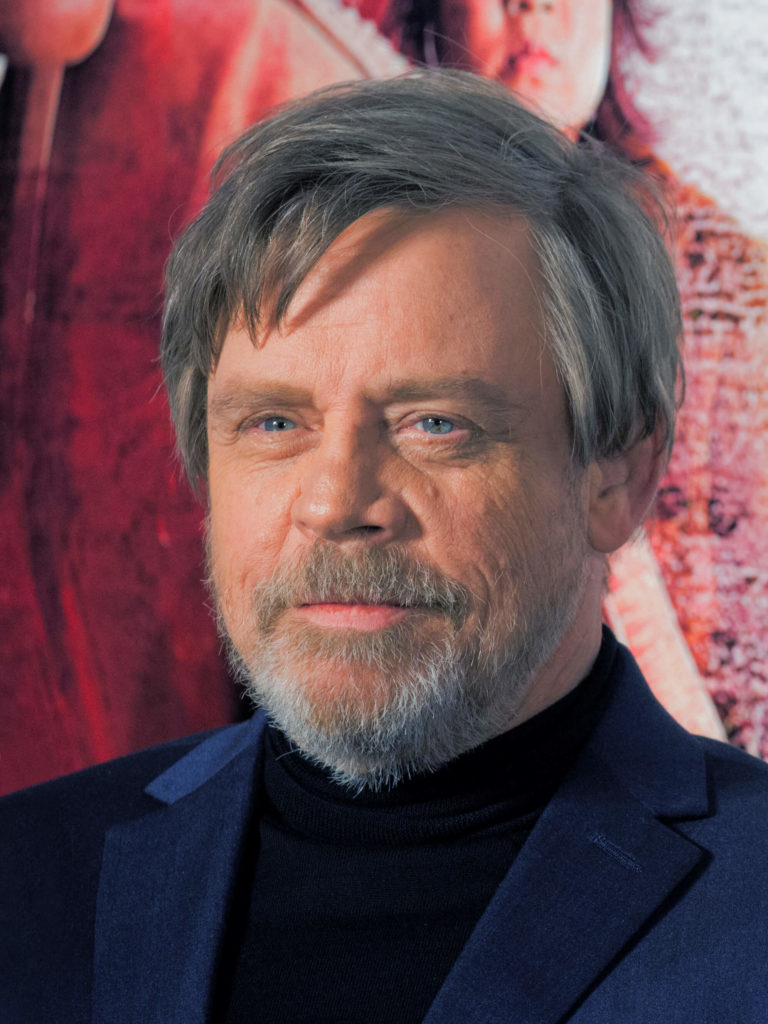 Mark Hamill, who plays Luke Skywalker, follows a vegetarian diet and is a keen animal lover. He is a friend of environmentalist and primatologist Jane Goodall, and back in September 2018, he urged his more than 3 million Instagram followers to support Goodall’s work and save chimpanzees from extinction.

“As a kid, I dreamed of having a pet chimpanzee but now realize they belong in the wild,” he wrote. “In 1900 there were 1 MILLION living there, today only around 340,000. Please help [Jane Goodall save chimps from extinction].”

Jane Goodall praised the actor for raising awareness of chimp extinction. She acknowledged his “tremendous kindness and compassion” on her own Instagram. She added “a new hope indeed!,” referencing the 1977 blockbuster hit “Star Wars: Episode IV – A New Hope.” 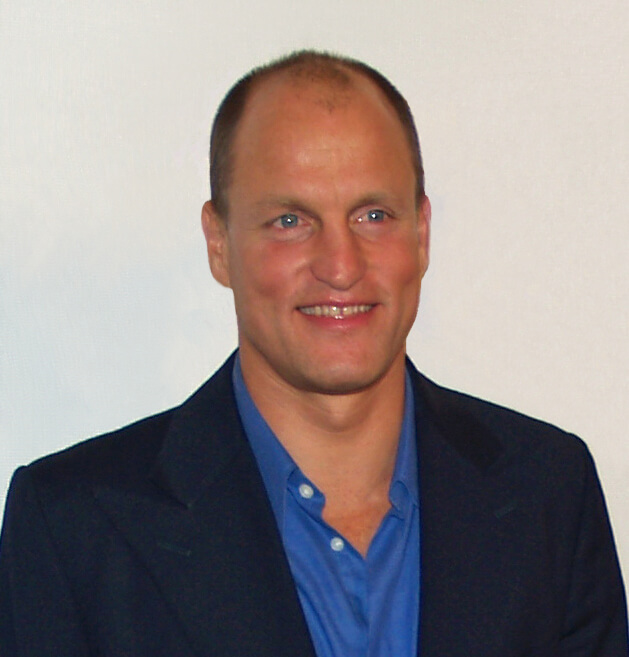 Harrelson, who plays Tobias Beckett in “Solo: A Star Wars Story,” has made no secret of his passion for the vegan lifestyle. He frequently speaks out about the health benefits of eating plant-based foods and openly supports vegan campaigns and initiatives. Recently, he lent his support to Million Dollar Vegan, a campaign that aims to encourage influential figures to adopt a vegan diet and lifestyle.

Prior to this, in the summer of 2018, he began working on a new project with vegan chefs Derek and Chad Sarno. The documentary series will be about sustainable plant-based eating around the world and called “Wicked Healthy World.” He also wrote the forward for their cookbook, “The Wicked Healthy Cookbook: Free. From. Animals.”

It wasn’t the environment that initially drew Harrelson to the vegan diet, but his health. He told InStyle last year, “I eat vegan, but I mostly eat raw. If I have a cooked meal, I feel my energy drop. So when I first started shifting my diet, it wasn’t as much a moral or an ethical pursuit but an energetic pursuit.” 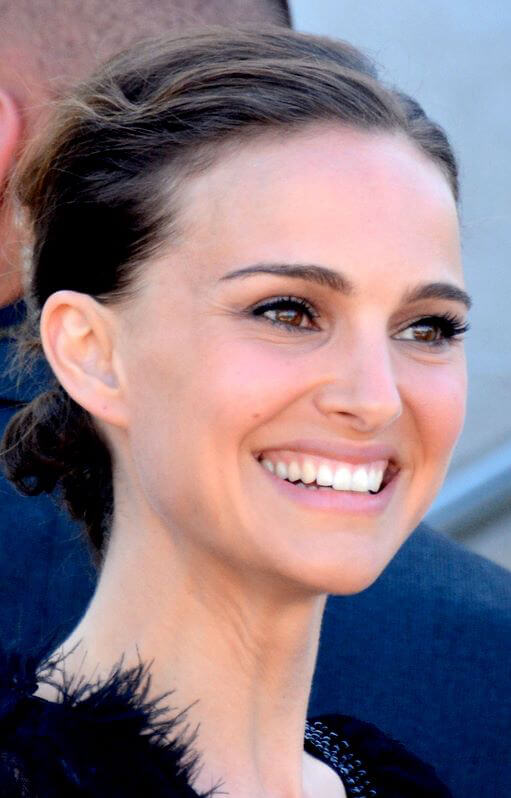 Natalie Portman—who played Padmé Amidala Naberrie in three films of the Star Wars franchise—is also a vegan and animal rights advocate. She has spoken out on behalf of the animals on a number of occasions, even requesting a full vegan wardrobe for her 2018 movie “Vox Lux.”

Recently, she gave an impassioned speech about the link between feminism and veganism to 16,000 students during WE Day in California. She said, “only after I became active in women’s issues did I realize that my veganism was related to those very issues.”

“Dairy and eggs don’t just come from cows and chickens, they come from female cows and female chickens,” she continued. “We’re exploiting female bodies and abusing the magic of female animals to create eggs and milk.” 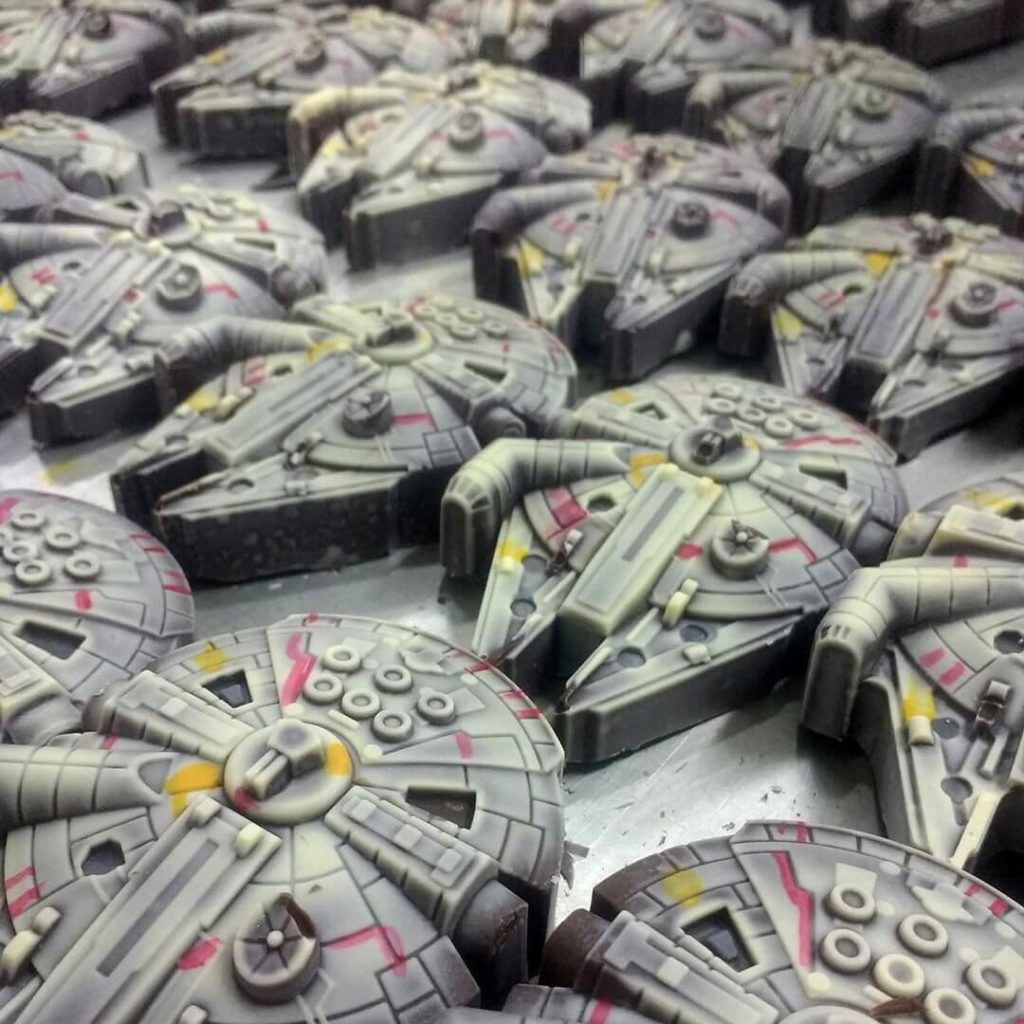 2. It Has Inspired Vegan Snacks and Recipes

If you’re going to sit down and enjoy a movie marathon filled with vegan and animal-loving actors, it’s only appropriate you stock up on—or make your own—Star Wars-themed vegan snacks to keep you going.

Artisan chocolatier Jon Good Chocolates makes replicas of the Millenium Falcon and Star Fighters in vegan chocolate form. The website says, “our stunningly detailed, handmade chocolate space ships look so amazing, lots of people are hesitant to eat them. But you should totally eat them because THESE SPACESHIPS ARE DELICIOUS.”

If you prefer to make your own snacks, there are a number of vegan-friendly Star Wars-themed recipes out there. If you’re watching with children (or not), try making fruit lightsabers like Eats Amazing. All you need is some brightly colored fruits—like raspberries or grapes—some kebab skewers, and tin foil. Carrot Darth Vaders and Yoda apples are also an option, thanks to Sushi Chef Japan and Bit Rebels respectively.

If you want something a little more indulgent, try making these Chewbacca vegan chocolate chip cookies by You Are Not So Smart. 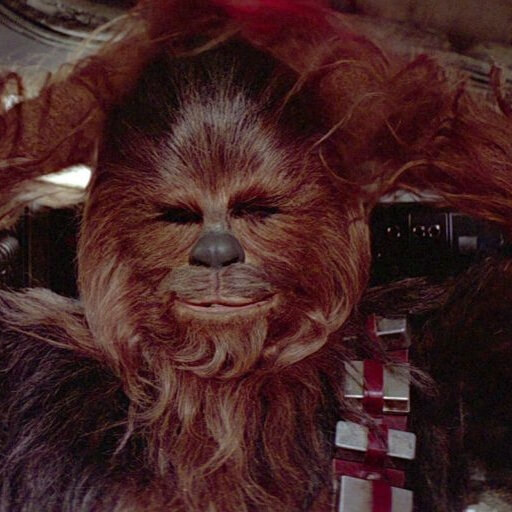 Chewbacca has a vegan epiphany in “The Last Jedi”

If you’re going to select a few of the Star Wars films to watch—let’s face it, nine is a lot to fit into one day—make sure 2017’s “The Last Jedi” is on the list.

During the film, Chewbacca—often affectionately referred to as Chewie—seems to have a vegan epiphany. He’s about to tuck into a chicken-like bird when he catches sight of a small group of Porgs—cute, sea-dwelling birds—looking at him with sadness in their eyes. He then makes the decision to stop eating the meat.

PETA social media strategist Joelle Vann said after the initial release of the film, “Chewbacca is hanging out with the Porgs on Ahch-To. He’s gleefully sitting by a fire, a whole, roasted, chicken-shaped corpse in his hand that he’s moments away from putting in his mouth.”

“But then he sees a small group of Porgs looking at him with adorable sorrow,” she continued. “In essence, their CGI-generated eyes are asking how he could possibly eat one of their kin.” 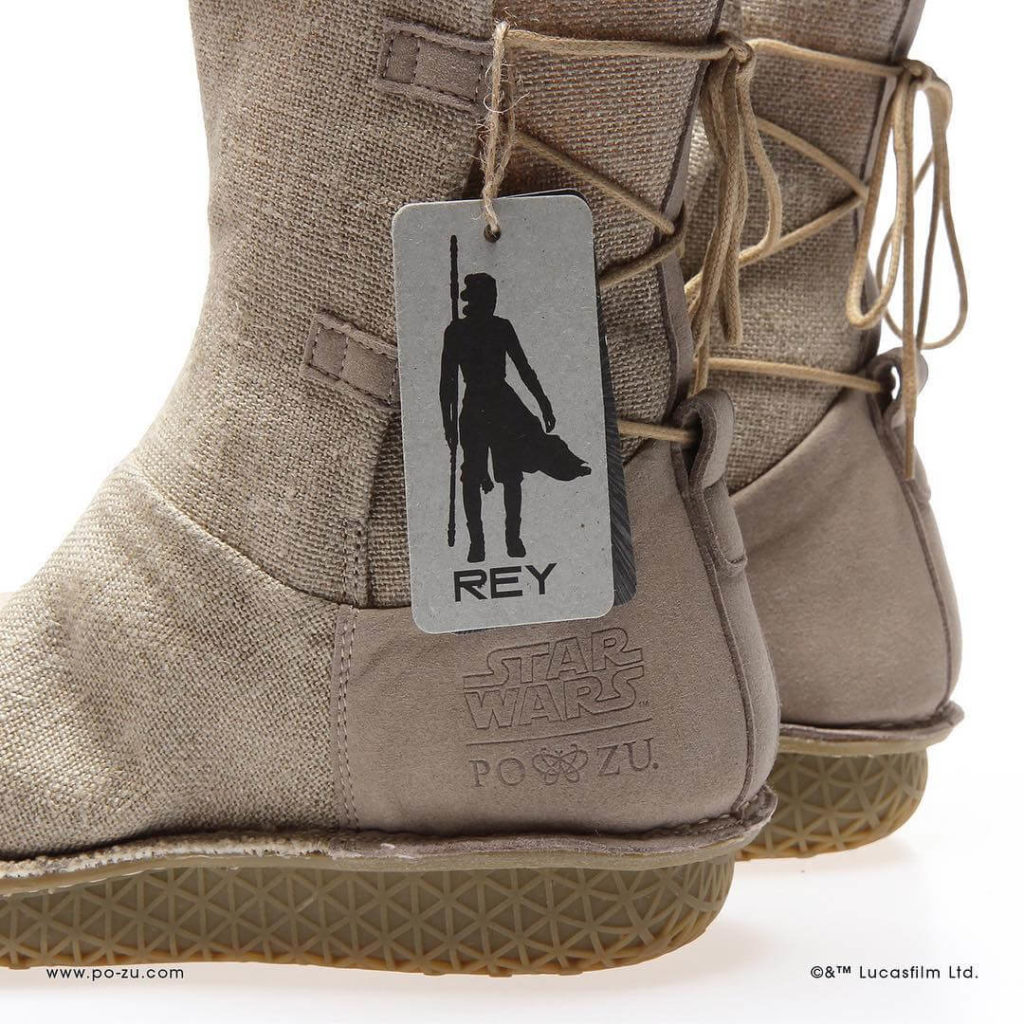 4. It Has Inspired a Range of Vegan Shoes

If you’re not in the mood to watch a film, celebrate all things Star Wars with themed shoes by ethical and sustainable footwear Po-Zu. The company offers a range of vegan styles inspired by the leading characters of the franchise.

The company notes, “our Star Wars collection is expertly handcrafted in Portugal in line with our stringent ethical and sustainable standards using natural materials. We are delighted to offer our Star Wars footwear for men, women, and children.”

If Rey is your idol, try the vegan mid-calf boots, made with linen, cork, organic cotton, and coconut husk. If you’re more into the Porgs, try the low-cut sneakers complete with a print of the adorable sea birds. You can even purchase Chewbacca ugg-style boots, which feature faux fur, a natural rubber sole, and a built-in shock-absorbing foot mattress. 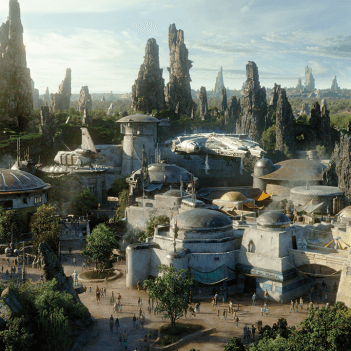 5. It Inspired a Vegan-Friendly Disney Experience

If you love theme parks, honor George Lucas’ popular franchise by making a trip to Disneyland’s Star Wars-themed experience. You can’t do this actually on May 4th, as Star Wars: Galaxy’s Edge isn’t open until August, but if you’re after a belated celebration, this could be the one for you.

The new Star Wars-themed experience—set to open at the Disneyland Resort in Anaheim, California and Walt Disney World Resort in Orlando, Florida—will feature enclosed passageways, with no obvious markings to maintain the atmosphere, that expand and compress to portray fades in the film. It also features a replica of the Millennium Falcon, one of the franchises’ most famous starships.

This all sounds pretty intense and exciting, so if you’re feeling overwhelmed by the experience, the new attraction will serve plenty of vegan food to keep you sustained. At Docking Bay 7 Food and Cargo, guests can feast on Ithorian Garden Loaf, aka plant-based meatloaf with roasted vegetable mash, seasonal vegetables, and mushroom sauce. To wash it down, Oga’s Cantina will serve vegan blue milk, just like the kind Luke Skywalker drank.