Corbett wasn’t alone during this daunting long run. She kept time with a small crew of pacers, along with her determined dachshund, TruMan. In a triumphant Instagram post, with herself and two of her crew, she wrote, “These two guys gave it there all and went the last 66 miles overnight. They gave up the comfort of a bed and slept in the ground with me. They made sure I made it safely to the finish. I owe my FKT to these guys. Along with (Phil & TruMan) Thanks to my trail brothers @jayleesadventures and @dave_wiskowski for helping me to #doepicshit #dohardthings.”

Along with this support, Corbett sustained herself with Muir energy gels, avocados, natural vegan bars, and almond butter packs. She also ran in vegan trail running shoes made by Hoka One One. 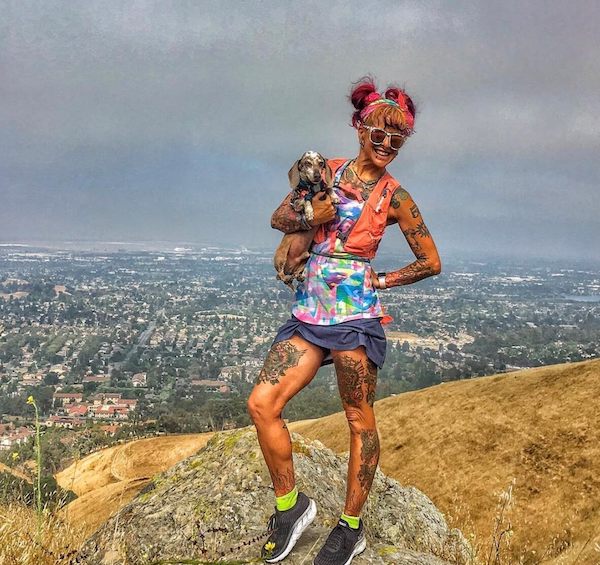 Setting an athletic record for such a grueling challenge is an incredible feat in itself, but the accomplishment is even more unfathomable given that Corbett completed a 150-mile trail race just four days before beginning this new challenge. She commented on Instagram, “Not sure why on earth I expected the #muirramblerouterun 310 miles would be easy.” Both the physical and mental effort must have been all-consuming, but judging by her photos, one would almost believe that it was easy. Each post features Corbett smiling, striking poses, and cuddling with TruMan. Her hot pink running skort and matching pink hair also add to the fun-loving photos.

This isn’t Corbett’s first win by far. Most recently, she took first place in the female division of the 72-hour Beyond Limits Ultra race, running 192 miles over the three-day wilderness event.

Since going vegan 24 years ago as a way to combat her drug and alcohol addiction, Corbett has run an impressive 250 ultramarathons of varying distances. Now sober, she adheres to a raw vegan diet and an overwhelmingly positive attitude, riding that endless runner’s high.