Updated October 4, 2019. The tradition of Oktoberfest began with a wedding in 1810. On October 12 of that year, German Crown Prince Ludwig married Princess Teresa of Sassonia-Hildburghausen, and the entire city of Munich was invited to the post-wedding celebration. Over 200 years later, the festival is still going. It starts in September and finishes on the first Sunday of October.

If you’re in Munich, you don’t need to worry so much about hidden animal products in your beer. Most German brewers adhere to purity laws, meaning only hops, barley, water, and yeast can be used in the brewing process. Finding vegan food is a little more tricky — traditional Bavarian cuisine is extremely meaty — but it’s not impossible. Some of the beer tents offer options, so check the menu in each before you decide where to set up camp for your drinking session. Whichever tent you choose, there are guaranteed to be pretzels in abundance, and veggie burgers and fries can also be found in food stalls on site.

If you didn’t make it to Munich, you don’t need to miss out. Nowadays, nations around the world also raise a glass mug of German beer and nosh on giant soft pretzels and vegan currywurst. In London, Vegtoberfest is taking place this month. The Camden event is a totally vegan version of Oktoberfest, with plant-based bratwurst and other vegan versions of traditional Bavarian fare on offer.

Or, why not host your own Oktoberfest? Greet your guests with a vegan beer and a spread of these seven German-inspired recipes. Lederhosen optional. 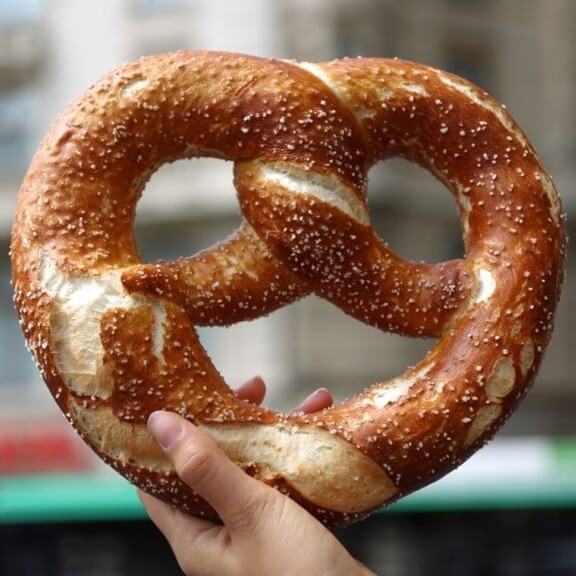 An Oktoberfest celebration is not complete without pretzels.

Become a master pretzel twister! Giant soft pretzels are non-negotiable for a proper Oktoberfest celebration. Despite its twisty appearance, the ingredients are quite simple, and with a bit of patience, you’ll find pretzels are actually easy and fun to make.

If you don’t have time to allow your dough to rise, try Hot For Foods soft pretzel bites. She uses store-bought pizza dough and creates little pretzel rounds, so you don’t have to worry about twisting the dough into the classic pretzel shape. Whichever method you choose, be sure to serve your pretzels hot, with plenty of coarse sea salt, and have mustard (and beer cheese) on hand for dipping. 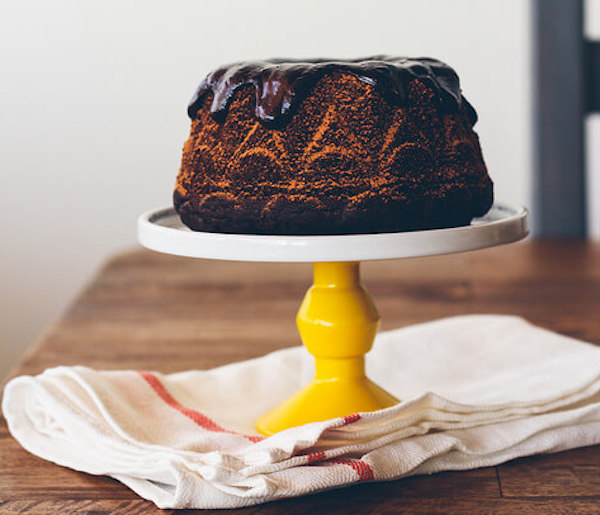 Eat your alcohol with this whiskey ganache. | Oh Lady Cakes

For those who don’t drink, you can still partake in the obligatory Oktoberfest beer consumption by eating your alcohol. This recipe uses an Irish beer, but we’re going for more of a nod to tradition, not complete authenticity. Feel free to sub in your favorite German beer, but make sure it’s a vegan stout or dark beer; it really helps to bring out the chocolate flavor. The whiskey ganache is equally decadent and divine! 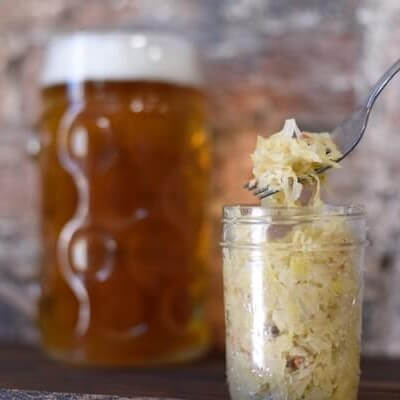 Sauerkraut takes time and dedication, but it’s worth the wait. | Food 52

Not going to sugar coat this; homemade fermented sauerkraut takes some dedication and major patience. Start now so the kraut will be ready by the time you host your get together. The beauty is that you can get creative with your kraut; it doesn’t have to be just cabbage. You can also mix up the spices and find your perfect spicy to sour ratio. Learn from this step-by-step sauerkraut tutorial, and who knows, you might just find that fermentation is your new favorite hobby. 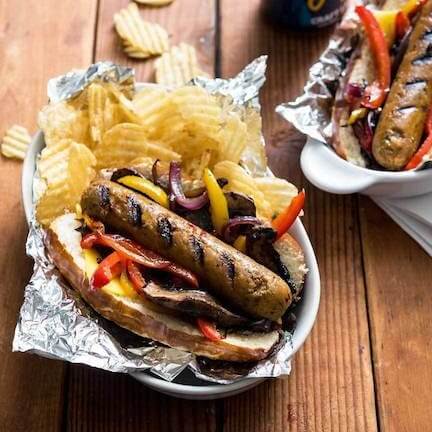 Grab some of your favorite vegan sausages to make this German-inspired main. | Vegan Yack Attack

This recipe takes a few store-bought staples and transforms them into an Oktoberfest savory main dish. Buy a pack of your favorite vegan sausages, marinate in a German lager, then add some sauteed veggies and optional vegan cheese to a toasted (pretzel) bun, and you’re good to go! Again, make sure you have some spicy mustard on hand, and perhaps some homemade sauerkraut as well. 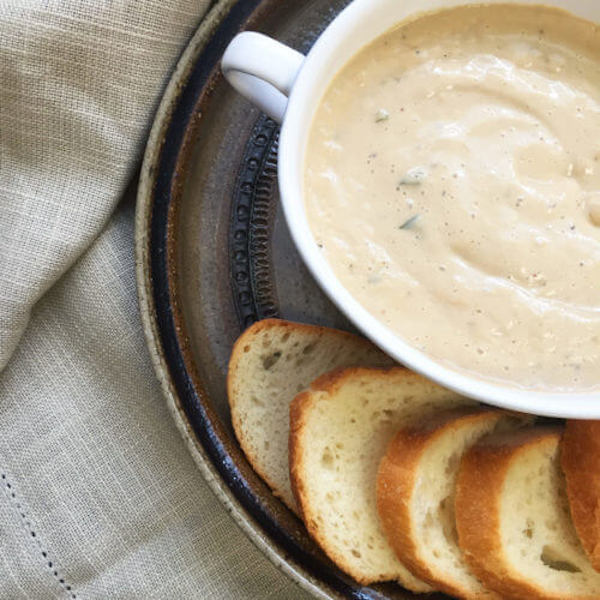 This homemade cheese is luxurious and creamy. | Field Roast

Not everyone is a fan of mustard, but you need something to dip those giant soft pretzels in. Enter a big, creamy, luxurious bowl of homemade beer cheese. And guess what? This recipe calls for just a cup of lager, so you’ll have leftover beer. You know, in case you get thirsty from that pretzel salt.

Fried meat may not sound all that appetizing, but the vegan version is definitely worth a try. This traditional German staple is veganized with wheat gluten, then breaded and fried for a crispy, savory, and perfectly textured bite. Slather with beer cheese, sauerkraut, caramelized onions, or mushroom gravy.

Once again, we’re derailing from authentic and including this as more of a tongue-in-cheek recipe. Despite the name, German chocolate cake was not invented in Germany; it was created in America, named after American pastry chef Samuel German and his baking chocolate bar, known as Baker’s German Sweet Chocolate. Traditional or not, this vegan cheesecake is truly outstanding and should be a part of any celebration. This is not a raw vegan “cheesecake.” It’s like the real deal Cheesecake Factory style slice that feels oh-so-decadent and so incredibly good.

Best Vegan Enchiladas: Can They Beat My Mom’s?