Be it breakfast, brunch, dessert, or even dinner, indulging in a plate of sweet or savory fluffy waffles is one of the best ways to treat yourself. You don’t need eggs or dairy to make them either, vegan waffles are easy and you won’t even notice the difference in the taste. 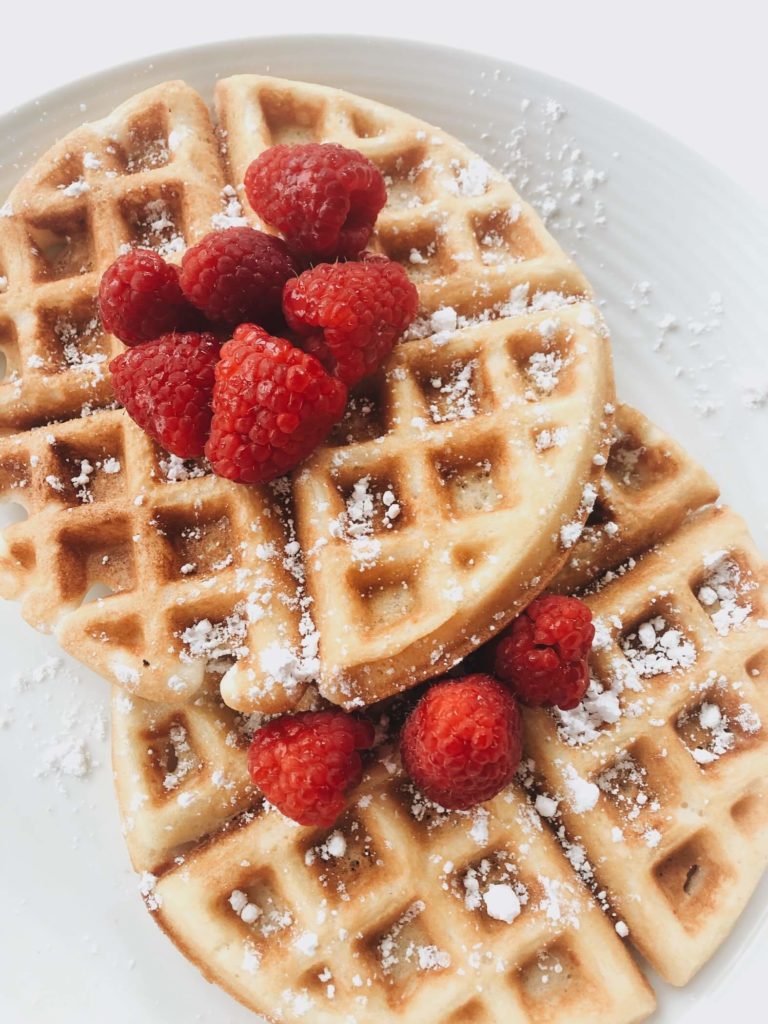 Vegan waffles are easy to make.

How to Make Vegan Waffles

When it comes to making vegan waffles, you have two choices. You can either make them from scratch or opt for a pre-made mix. If you’re a huge fan of waffles, you could invest in a one-kilogram bag of vegan waffle mix made by JM Posner. It’s super easy to use, you just need to add water and oil.

For a bit of variety, The Vegan Bros offer a vegan pancake and waffle mix bundle. The gluten-free mix is available in three different flavors, vanilla, strawberry, and chocolate fudge.

You’ll also need a waffle maker to pour the mixture into. There are a number of designs on the market, Andrew James’ Volcano Waffle Maker, for instance, is ideal for making deep Belgian waffles. If you don’t fancy investing in a waffle maker, you could also opt for molds to pour the batter into. You then simply pop the molds into the oven to bake.

If you want to make your own vegan waffle mixture from scratch, you’ll need to make a few swaps. Instead of dairy milk, opt for vegan milk. Instead of dairy butter, use one of the many vegan butter products on the market. You’ll also need to swap out the eggs. 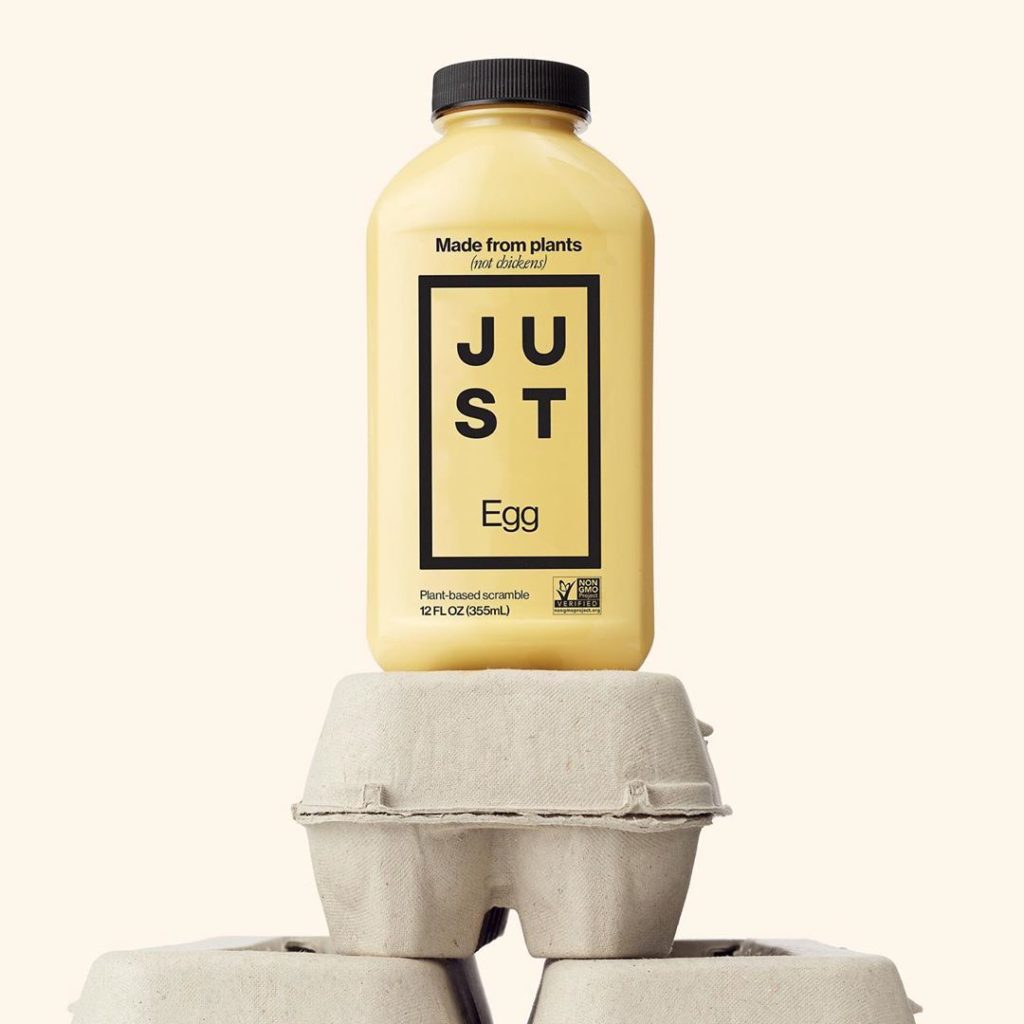 How to Replace Eggs in Vegan Waffles

Traditional waffle recipes call for eggs, but it’s easy to make them without. This recipe on Foodal recommends that instead of egg, you supplement ground flax seeds. Raquel Smith writes for the publication, “[the seeds] add healthy omega-3s that you wouldn’t find in regular waffles.” She continues, “just make sure you use seed that is ground rather than the whole version to make your flax egg.” You can also opt for blended or mashed banana or applesauce.

You could also look for a vegan egg product. JUST Egg is ideal for making waffles. The brand’s protein-packed, cholesterol-free vegan mixture is made from mung beans. Free and Easy’s egg replacer — made from potato flour — can also be used for waffles and pancakes. 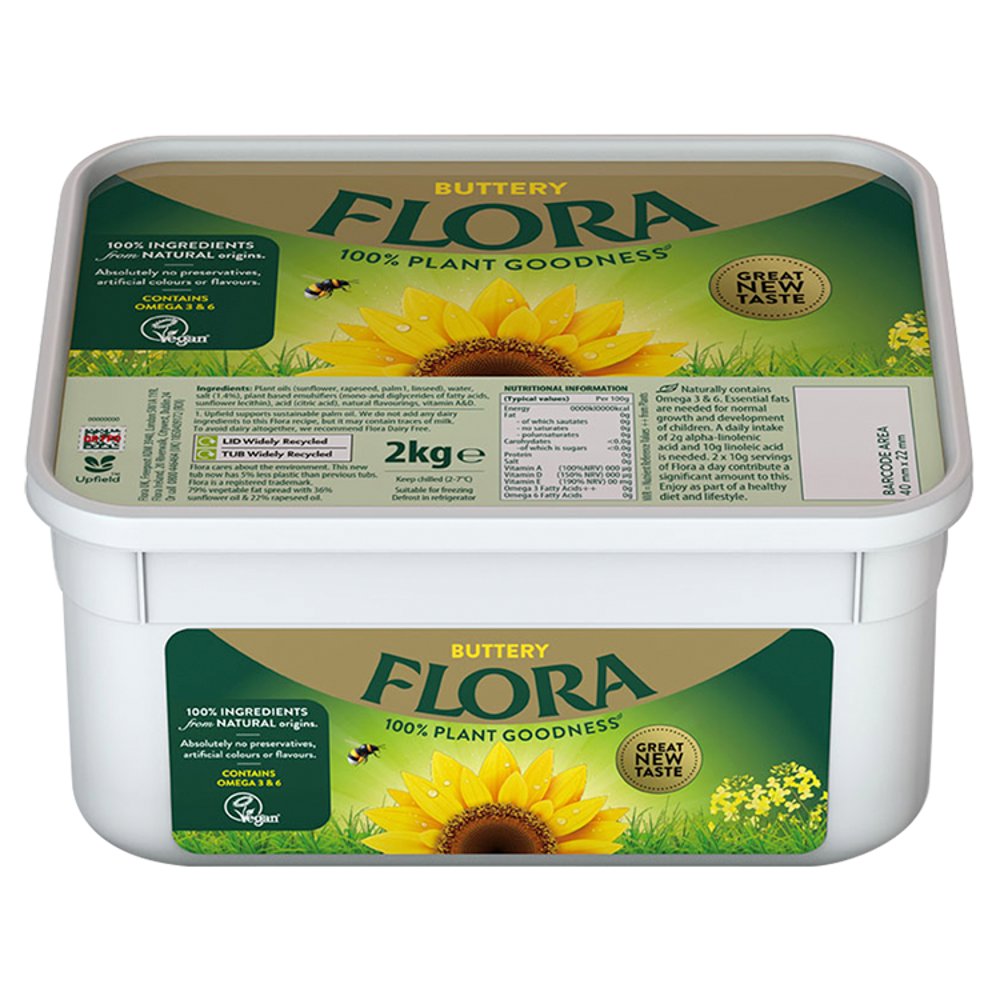 To get an extra crispy waffle, many recipes advise that you use oil. However, in the absence of oil, melted vegan butter can work in the waffle mixture itself.

Butter is best added to the outside of a waffle when cooked so that it melts in for extra deliciousness. To ensure you don’t miss out on this aspect of indulging in a plate of waffles, there are many vegan spreads to choose from. All of Flora’s spread range is vegan, including its Buttery Spread. Danish brand Naturli makes a Vegan Butter Block, and Pure offers a range of dairy-free spreads. 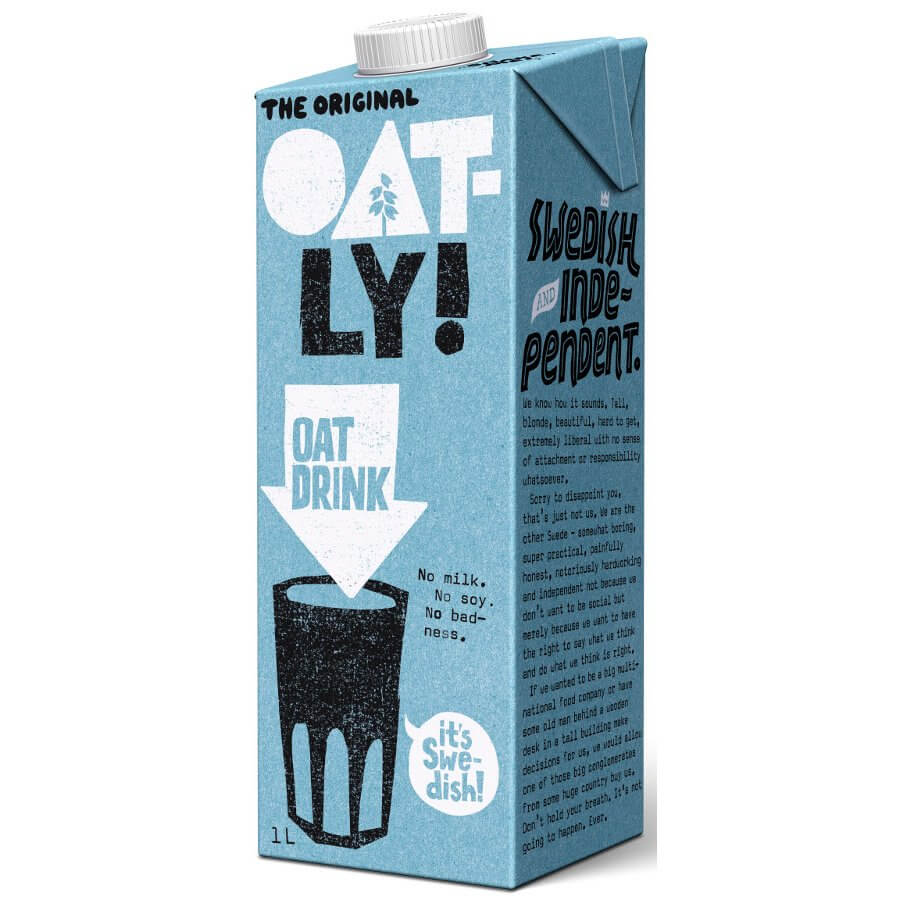 You don’t need dairy milk for waffles. You can substitute in pretty much any vegan milk you fancy, although some may work better than others, depending on the kind of waffle you’re after.

Sweetened oat milk is rich and creamy and has a similar thickness to dairy, if you want a more savory dish, opt for the unsweetened version. If you go for almond milk, you might want to consider going for a more vanilla-y taste, as almond milk often has added vanilla flavoring. Soy milk will also work, as will rice milk. Both of these come in sweetened and unsweetened varieties, so choose according to the kind of waffle you wish to make.

You don’t even have to use vegan milk. Water also works as a direct dairy milk replacement. It goes without saying that it won’t add any extra flavor to the dish, but it could result in a crispier finish. 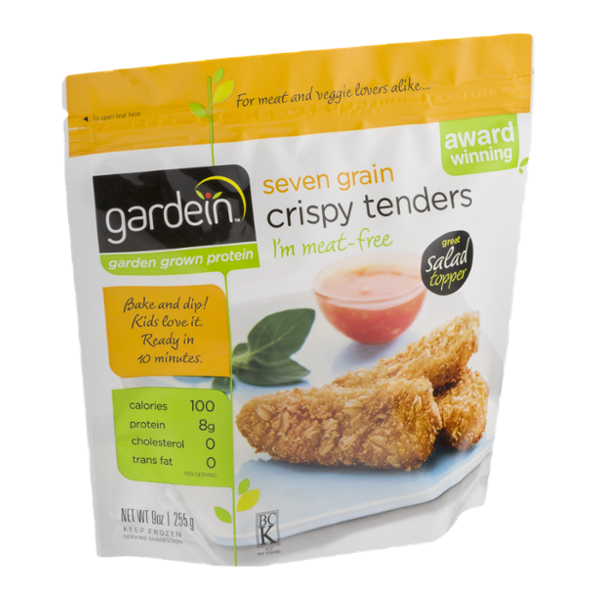 Serve Gardein meat-free chicken with your waffles for a savory dish.

For a real dinnertime treat, why not pair your waffles with vegan chicken? It’s commonly believed that the traditional version of the dish originated in the Southern United States in the 1900s. However, some also say that it originated in Harlem, New York. Either way, nowadays, chicken and waffles is a comfort food enjoyed by many around the globe.

If you’re making vegan fried chicken and waffles, there are a number of vegan brands to choose from. VBites makes Cheatin Southern Fried Chicken Pieces, and Gardein offers Seven Grain Crispy Tenders. A number of supermarkets also offer own-brand versions of vegan fried chicken. You could also make your own version, using seitan, tofu, cauliflower, mushrooms, or even jackfruit.

7 Vegan Waffle Recipes, From Light and Fluffy to Falafel 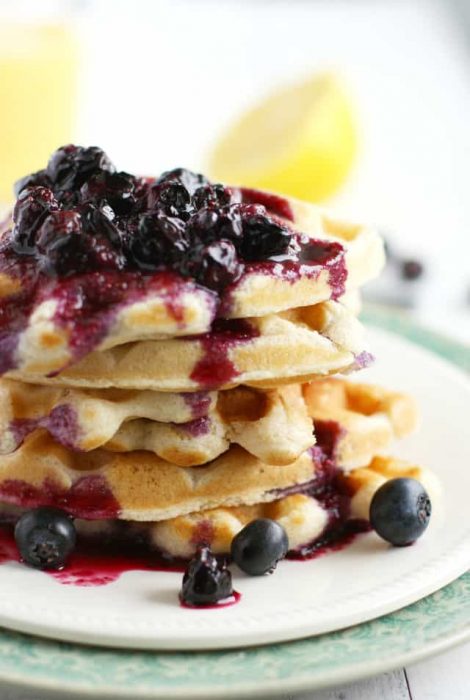 Let’s start with the basics. These are your perfect everyday waffles. No surprises, just pure reliable goodness that you can dress up with syrup, vegan butter, fruit or compote, nut butter, or whatever floats your boat. Make a big batch and freeze them for on-the-go breakfasts and snacks. 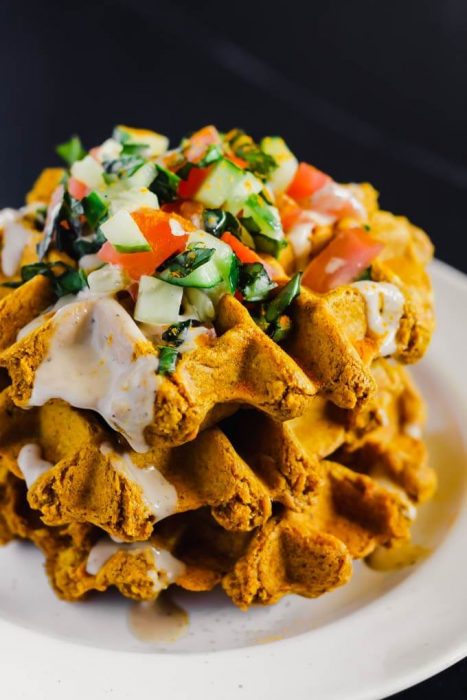 Not only are falafel waffles unique and delicious, but the name is also incredibly fun to say. Plus, there’s no need to fry or use excess oil when you waffle your falafel – they come out perfectly crispy on the outside and fluffy on the inside every time.

Why not make a falafel waffle salad? Top chopped romaine over one or two falafel waffles slathered with hummus, cherry tomatoes, Greek olives, cucumbers, vegan feta, and a drizzle of tahini dressing. 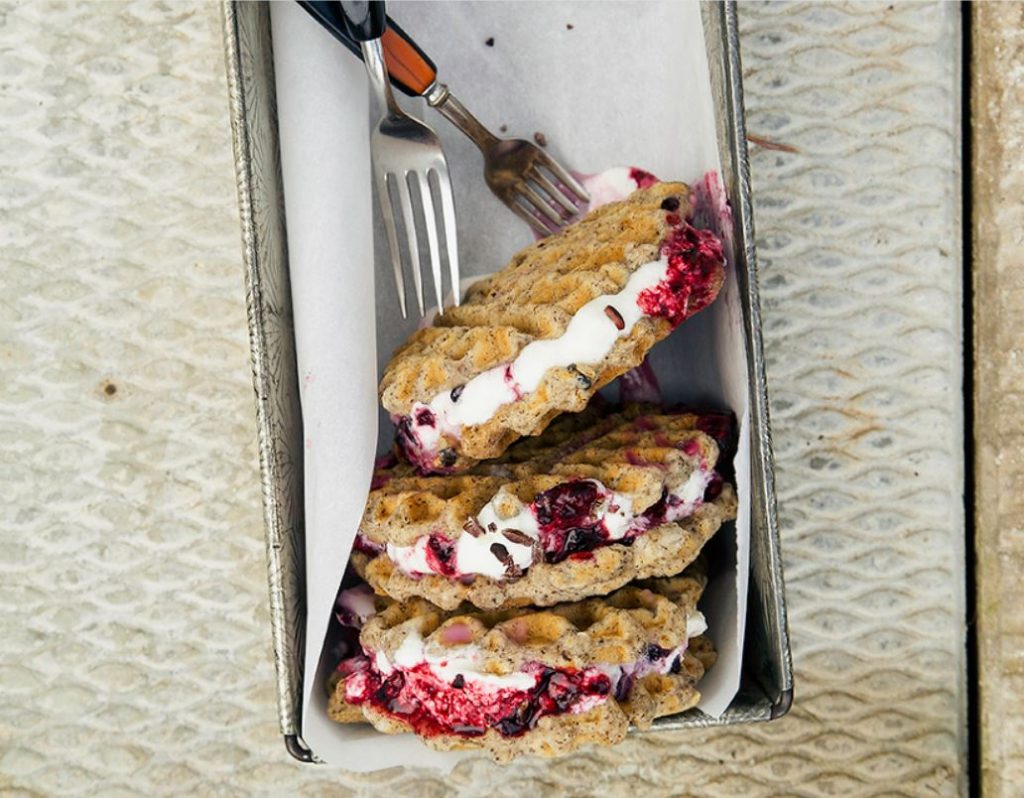 Add vegan ice cream to your waffles. | The First Mess

You could make a waffle sundae, but that would only require one waffle. With an ice cream waffle sandwich, you get two waffles! By simple math, the sandwich is obviously the superior option. Use your favorite brand of vegan ice cream, such as NadaMoo, Halo Top Dairy-Free, or Sorbabes, to make this dessert in a flash. 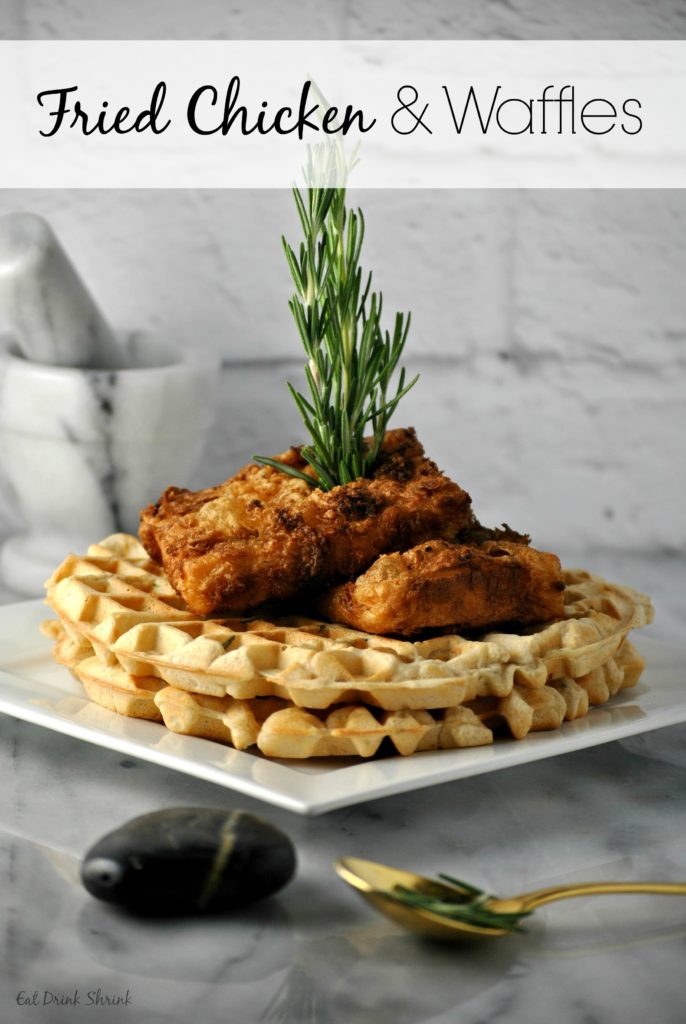 This recipe is simple to make and it’s packed with flavor. It’s a true crowd-pleaser. If you take away the hot sauce and the rosemary, it’s great for kids too. “If you love waffles, rosemary, truffle oil, and fried chicken, then you have to try my recipe,” says Eat Drink Shrink. “Your tastebuds will thank me later!” 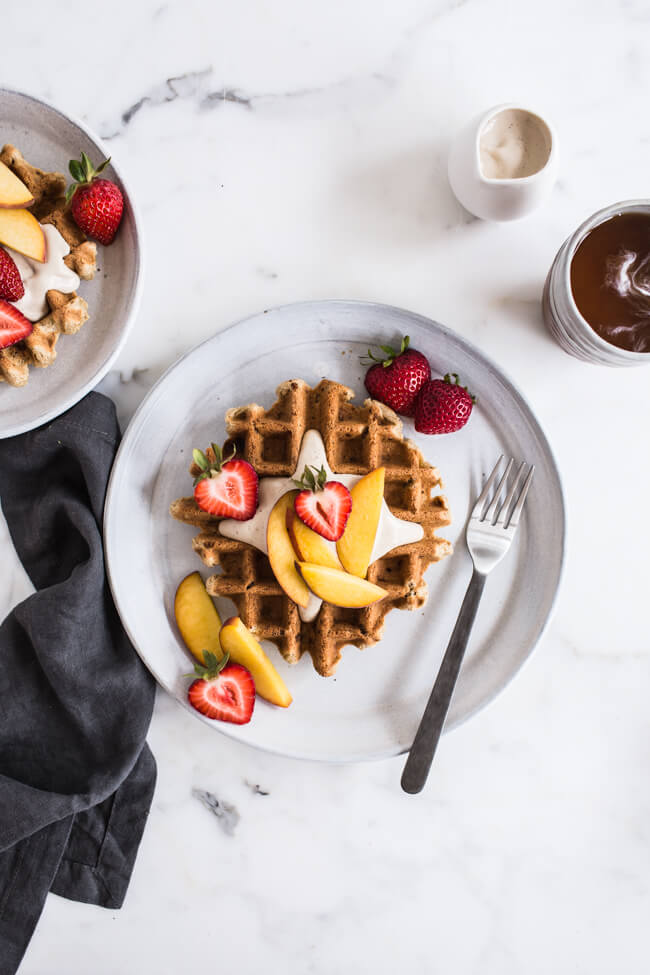 If you love vanilla, this is the waffle recipe for you. It’s ideal for breakfast, brunch, or even dessert, whatever takes your fancy. Serve with fresh fruits — like strawberries, blueberries, and bananas — for an extra helping of sweetness and flavor. 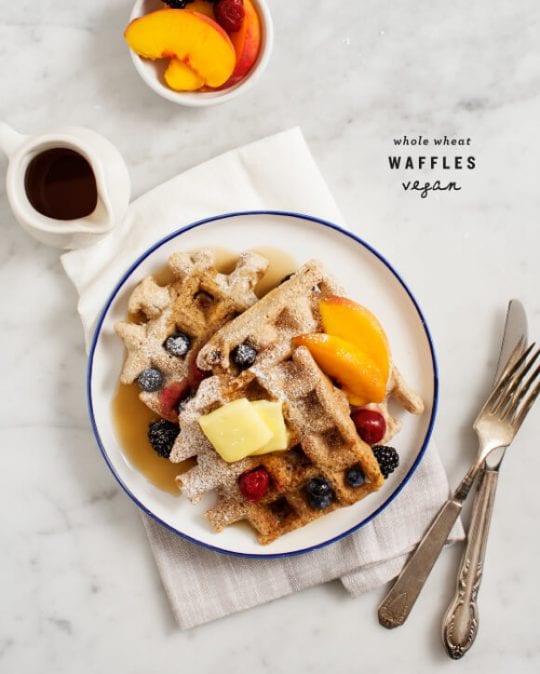 This whole wheat waffle recipe is ideal if you’re after a healthy Saturday brunch. Why not make a batch at the weekend ready for the week ahead? Freeze a bunch ready to pop in the toaster when a midweek craving hits. 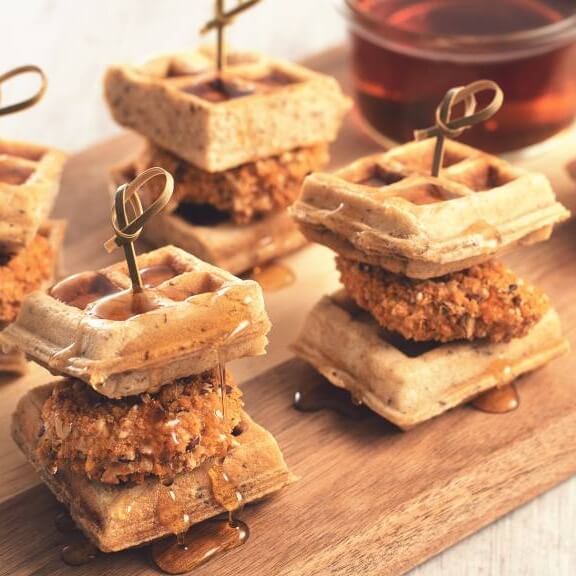 These mini vegan waffles served with Quorn’s crunchy Tex Mex Nuggets are perfect for when you need a bit of comfort food. They also make a great lunch or dinner that the whole family will enjoy.