Perfect for parties and gatherings (or even just a solo dinner) wings are loved by people of all ages and all backgrounds. But they don’t have to be made from chicken. Vegan buffalo cauliflower wings are just as satisfying and tasty, and they’re cruelty-free too. 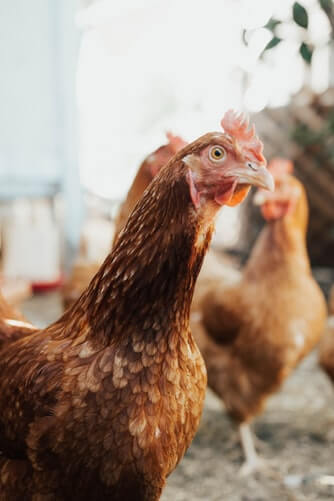 Chickens suffer in the meat industry.

In the U.S., 99 percent of all animal products come from a factory farm, which means it is likely wings sold in restaurants and supermarkets have come from a chicken living in poor, cramped conditions. Birds often live confined in warehouse-like buildings, which can house up to 20,000 chickens.

According to American animal protection organization Farm Sanctuary, chickens bred for their meat must grow to their “market weight” at an abnormally quick pace, which can lead to serious health problems. They struggle to walk, can suffer from deformities, and can suffer acute heart failure due to their size.

“Chickens who survive their time in production typically reach ‘market weight’ at just 6-7 weeks of age,” says Farm Sanctuary on its website. “[They] are sent to slaughter still peeping like baby chicks, even though their bodies have ballooned to the size of giant adult chickens.”

Research has also suggested that white meat could be bad for your health. A study conducted last year at the Children’s Hospital Oakland Research Institute showed that consuming both white meat and red meat can result in high cholesterol.

“When we planned this study, we expected red meat to have a more adverse effect on blood cholesterol levels than white meat, but we were surprised that this was not the case,” said Ronal Krauss, MD, the study’s senior author, in a statement. He added, “their effects on cholesterol are identical when saturated fat levels are equivalent.” 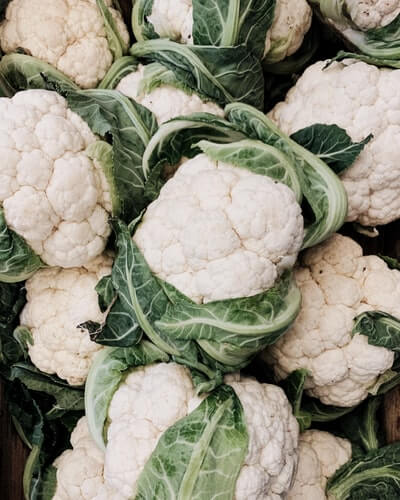 Cauliflower is high in fiber and vitamins.

Cauliflower, however, can help to lower cholesterol levels, thanks to its naturally high fiber content. It also packed with important vitamins. 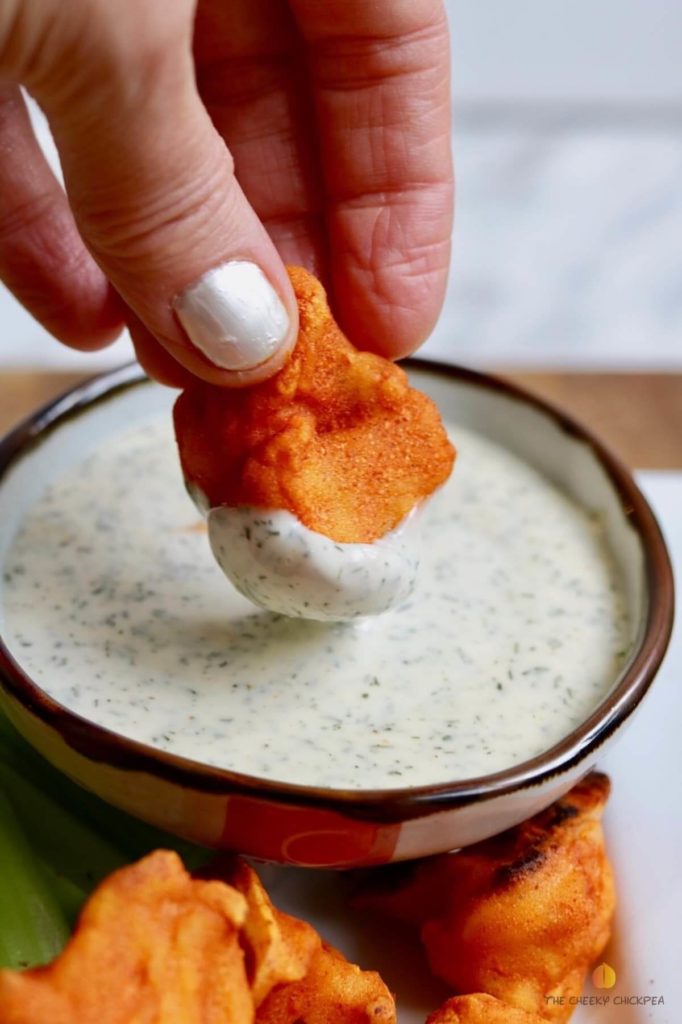 With the right sauce, coating, and dip, cauliflower wings can taste similar to chicken wings. | The Cheeky Chickpea

If you love buffalo chicken wings, you can get that same taste from a cauliflower wing, it’s all down to the batter and the spices used. Here are 7 recipes for vegan buffalo cauliflower wings that are so tasty you won’t need chicken. 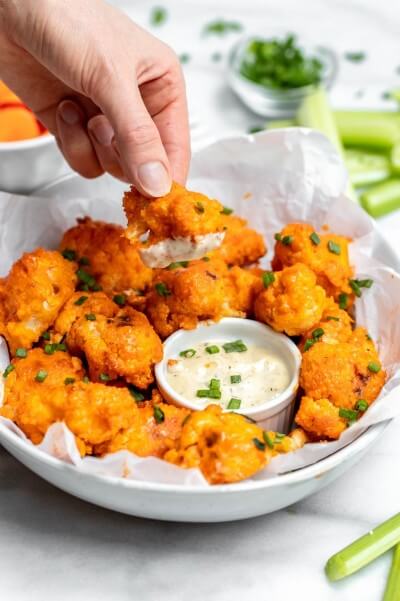 Try this rice flour-based recipe for your vegan cauliflower wings.| Eat With Clarity 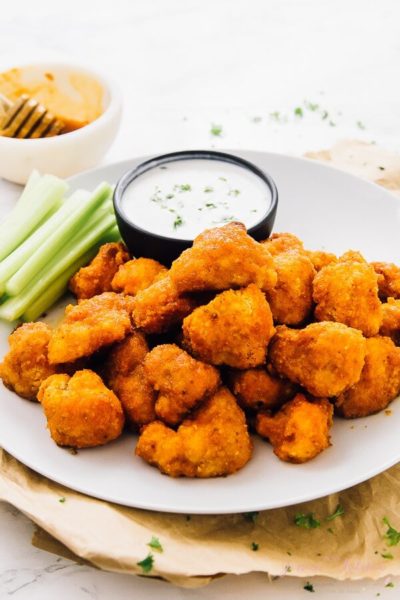 Add maple syrup to these gluten-free cauliflower wings. | Jessica in the Kitchen

These vegan gluten-free cauliflower wings are “spicy, delicious, and loaded with flavor.” Unlike usual buffalo wings, these are breaded for a little extra crunch. “Your friends will ooh, ahh, and look on jealously as you devour these,” says Jessica in the Kitchen. “The smell of the sauce is intoxicating. Share with them, it’s the right thing to do.” 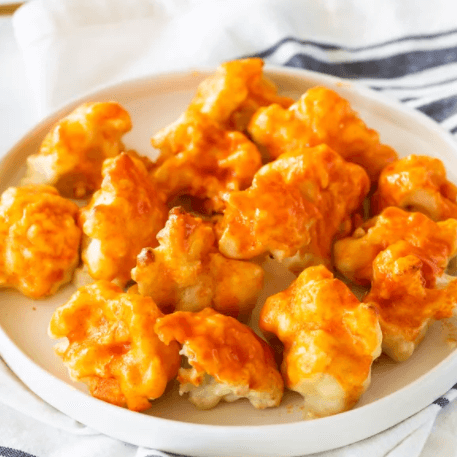 The Spruce Eats recommends oven-roasting your buffalo cauliflower wings. Simply coat them in a soy milk-based mixture and then bake in the oven for 18 minutes. Serve with a cool vegan ranch dressing for dipping. 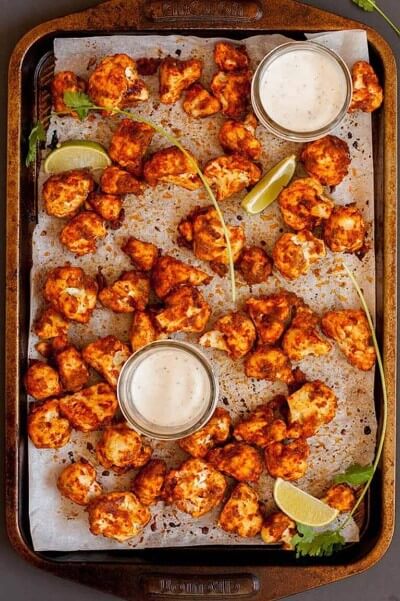 Add lime to your vegan cauliflower wings for flavor. | Foodal

This easy recipe takes under an hour to make. Bake until crisp, cover with spicy cayenne sauce, and add a little lime juice for a zesty flavor. If you like a little sweetness, you could even drizzle over some agave syrup. 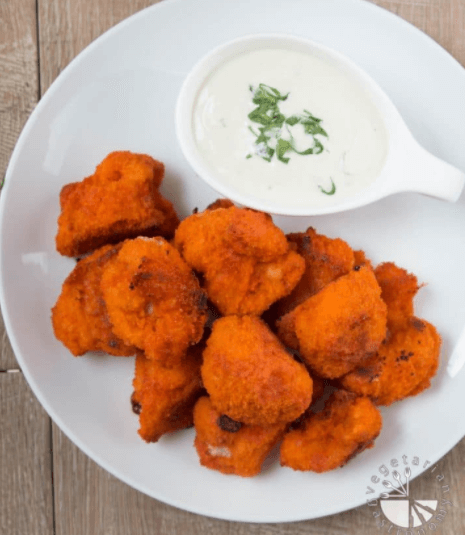 According to Vegetarian Gastronomy, these vegan cauliflower bites are “crispy, chewy, and breaded with tartness and spiciness.” If the heat is a little too much for you, that’s where the cooling vegan cucumber ranch comes in. The dairy-free dressing is easy to make and packed with eight healthy whole food ingredients, including cashews, apple cider vinegar, and fresh herbs. 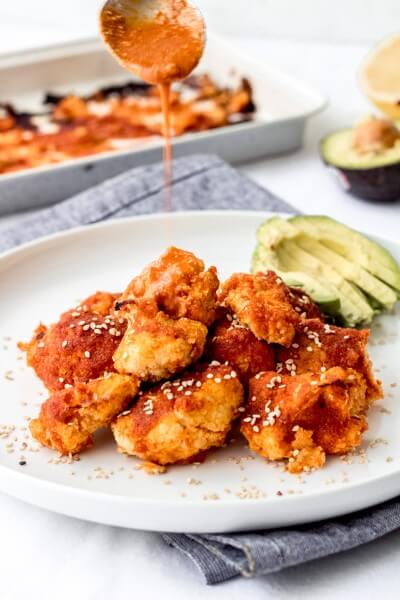 Can’t decide between sweet and sour and buffalo sauce? Sprouting Zen says you don’t have to. Instead, you can mix them together and create these unique sweet ‘n’ sour buffalo wings. They’re gluten-free, made with whole food plant-based ingredients, and they’re super tasty. 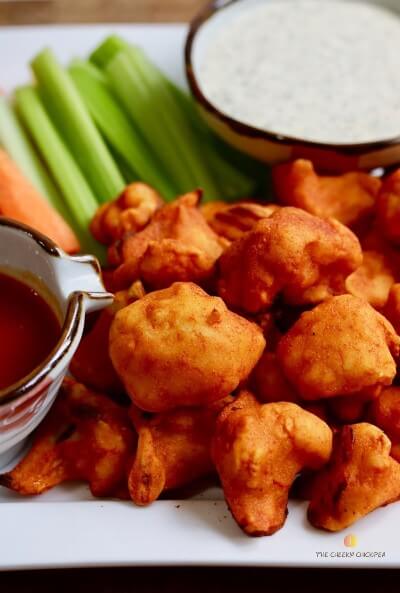 Like a little heat? Add Frank’s Red Hot sauce to these vegan cauliflower wings to give them a “good spicy kick.” Make sure you make some of the Cheeky Chickpea’s creamy vegan ranch too to cool down your mouth. “Seriously you need this dressing with these vegan buffalo wings,” says the recipe blogger. “It’s a match made in heaven. Honestly, I can’t stop eating these when I make them!”