Is there an occasion when a cheesecake isn’t appropriate? The short answer is no. Whether you’re hosting a dinner party with friends, or you’ve got a solo date with Netflix, indulging in cheesecake is always on the cards. So how do you make the perfect vegan cheesecake? Naturally, you need the right ingredients. Here’s everything you need. 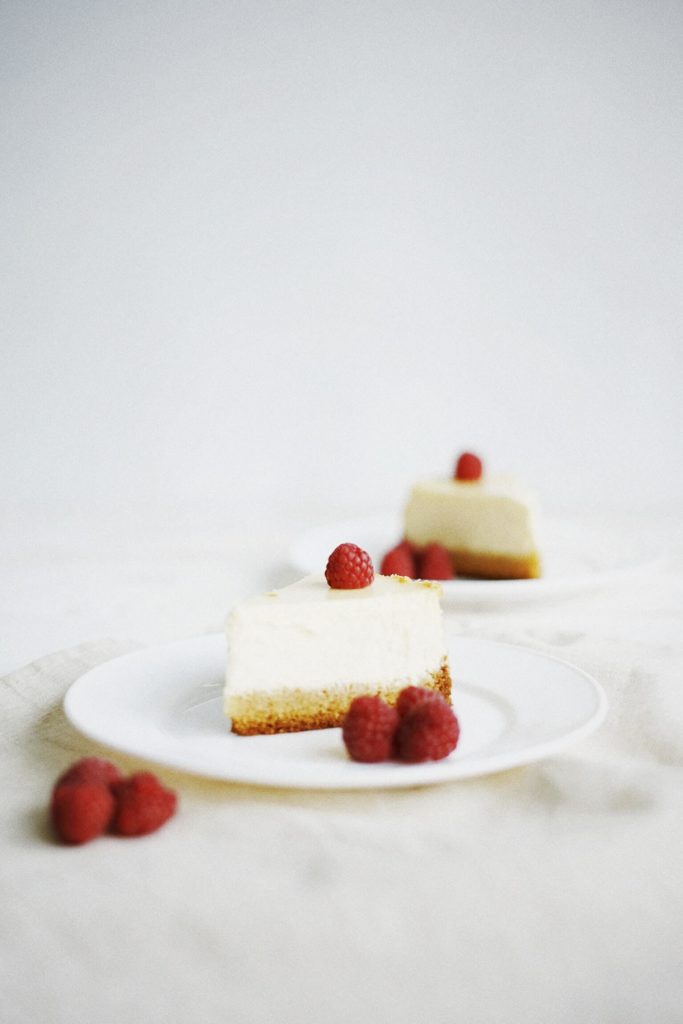 First up, you need to think about what kind of cheesecake you want to make. Want to go fruity? Strawberries, blackberries, blueberries, kiwis, and lemons all compliment a cheesecake perfectly.

Maybe you want something a little more rich and indulgent? You could make a chocolate cheesecake, or add chocolate chip cookies or Oreos. Salted caramel is also an option or espresso; for the latter, it’s best to get espresso powder rather than use coffee grounds. According to recipe blogger the Unconventional Baker, “if you use regular coffee, the additional liquid content will change the balance of ingredients in the cake.”

All recipes vary, but it’s likely you will also need either all or a selection of the following: salt, lemon zest, vanilla extract, cornstarch, coconut oil, and maple syrup. You’ll likely also need nuts, oats, or both for the crust.

One of the most important ingredients you will need is cream cheese.

When it comes to vegan cream cheese, there are quite a few options on the market. Here are three options to choose from. 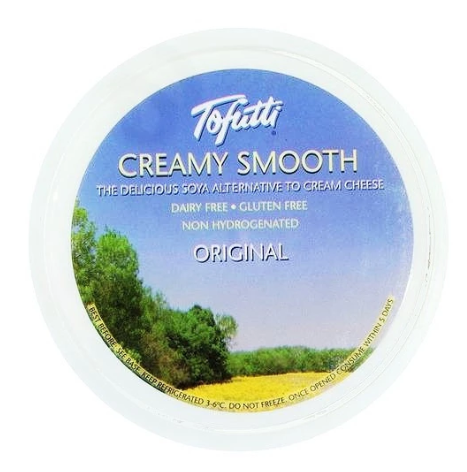 Some recipes—like Minimalist Baker’s Easy Baked Cheesecake—call for Tofutti Cream Cheese specifically. According to the brand, it’s “even better” than the real deal. It’s made from simple ingredients, including tofu, olive oil, and xanthan gum. If you’ve got some leftover after your cheesecake, you can also make Gluten-Free Spinach Pie or Creamy Twice-Baked Sweet Potatoes. 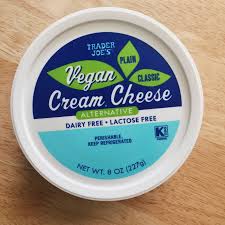 Lots of recipes call for Trader Joe’s own-brand coconut oil-based vegan cream cheese, including Nora Cooks’ recipe for The Best Vegan Cheesecake. According to vegan product review site Vegan Showoff, the texture is smooth and the taste is mild with a slight twang. It notes, “this Trader Joe’s vegan cream cheese is the absolute best tasting one on the market.” 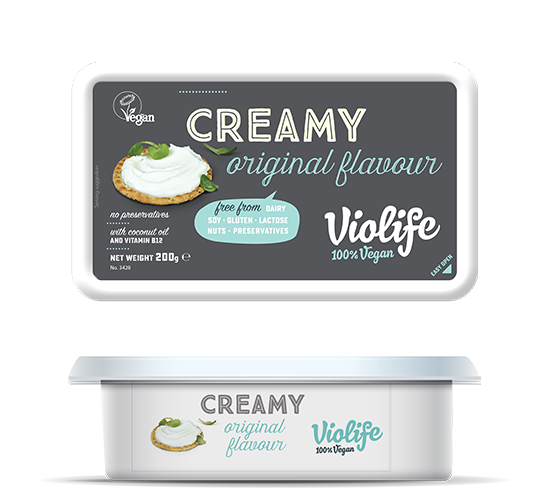 Violife is another strong option for cheesecake. The brand has a number of vegan cream cheese options, from Creamy with Herbs to Creamy with Hot Peppers. But for cheesecake, Creamy Original is your best bet. The product is made with a handful of ingredients, including coconut oil and sunflower kernels. It is also a source of Vitamin B12. 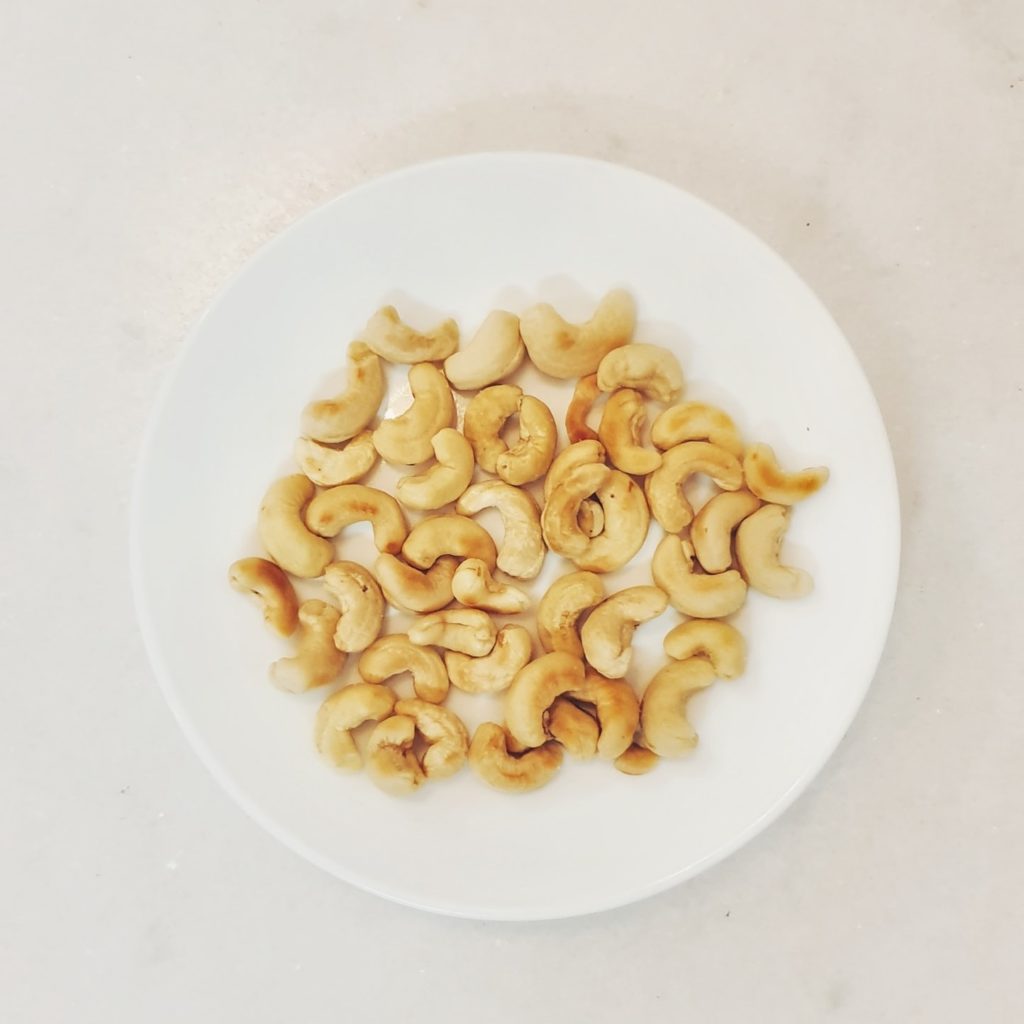 You can use cashews to make vegan cheese.

How to Use Cashews for Cheesecake

A number of recipes call for cashews to be blended with the vegan cream cheese. Using cashews in dessert might sound odd, but many recipe bloggers maintain this is the best way to get a creamy filling.

Minimalist Baker’s Easy Baked Cheesecake uses vegan cream cheese, cashews, and coconut cream in the filling. The blogger says, “I tested other varieties but found that this combination yields the absolute best texture and flavor.”

Before you mix in the raw cashews, you usually have to soften them first. You can do this by pouring the amount you need into a mixing bowl and cover them with boiling water. After one hour, drain them thoroughly.

Once the cashews are soaked, drained, and softened, you simply add to a blender with the other ingredients you need until the mixture is smooth and creamy. This is then evenly spread on top of the crust. 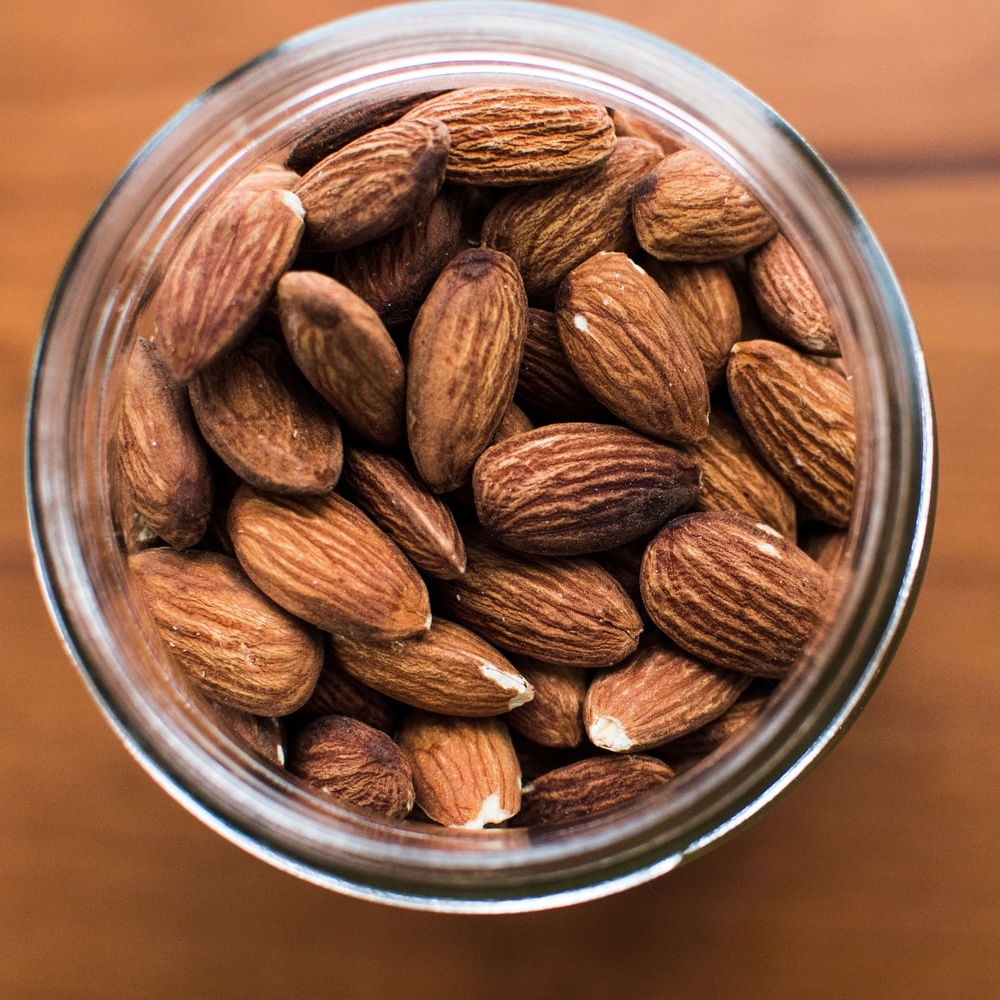 If you’ve gone for a cookie option, the recipe will often ask you to simply blend them up together with coconut oil and sugar. When it’s blended, spread evenly and press into the pan.

To make a crust with nuts, the process is usually pretty similar. Mix your chosen nuts together in a food processor (often with coconut oil or desiccated coconut) and then press down into the pan.

In need of some inspiration? Here are seven vegan cheesecake recipes to choose from—that’s one for every day of the week. 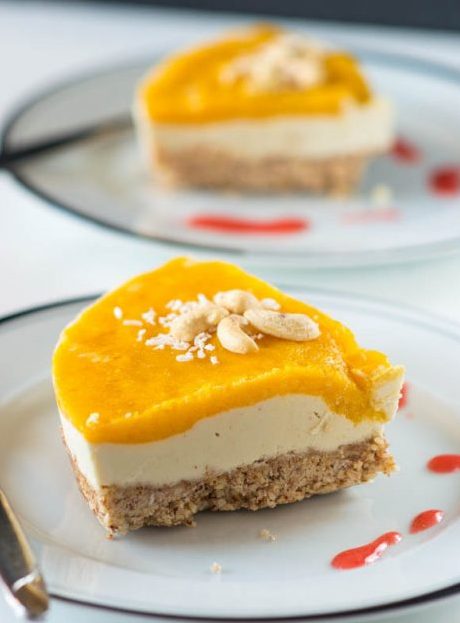 This raw mango cheesecake has a surprise secret ingredient. | That Girl Cooks Healthy

Swap out the traditional syrupy strawberry compote with a cool and refreshing layer of natural mango puree. The coconut in the crust adds to this dessert’s tropical vibe. Also, there’s a surprising ingredient hidden in the filling: zucchini! The neutral-tasting veggie adds to the creaminess and texture without a weird taste. Just try it. 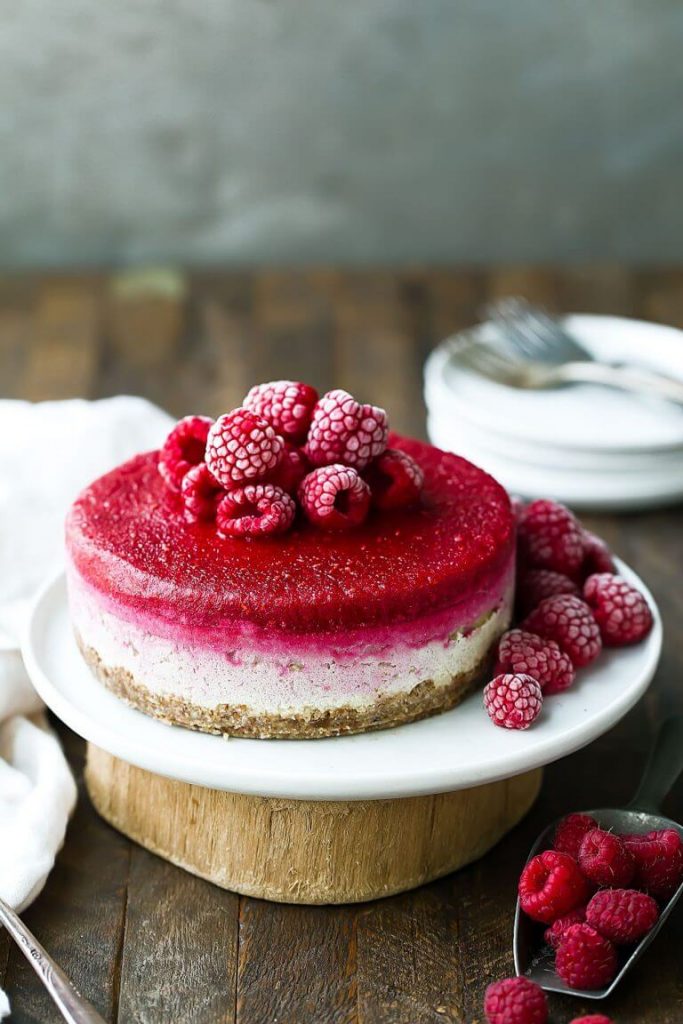 This raspberry cheesecake is easier to make than it looks. | The Movement Menu

We don’t blame you if you just make this for the Instagram photo, but we highly suggest digging in after you get the perfect shot. The sweet crust and filling are balanced by the tart raspberry layer, setting off delightful pops of contrasting flavors with each decadent bite. 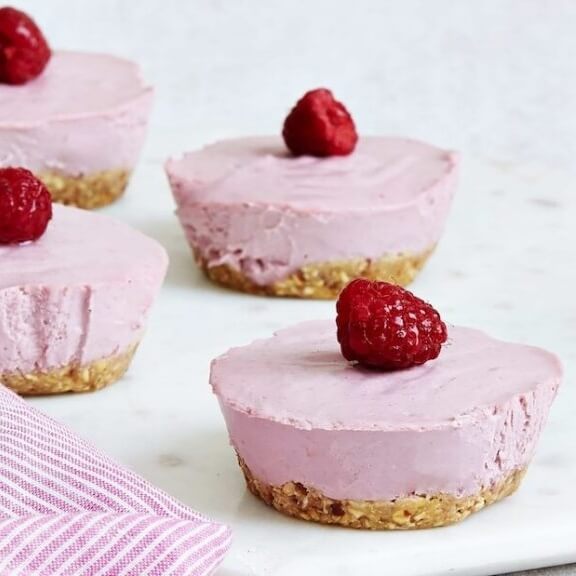 These raspberry mini cheesecakes are soy-free.

Everyone gets their own mini cheesecake with these adorably pink sweet treats. They’re also gluten, soy, and refined-sugar-free.

You wouldn’t guess this cheesecake was vegan. | Hot for Foods

For some, raw cheesecake doesn’t cut it. We get it. Those looking to replicate that classic New York-style slice can end their search with this recipe. It’s not too light, not too dense, and the texture is spot-on. Bring it to a party, don’t tell anyone it’s vegan, and watch it disappear. 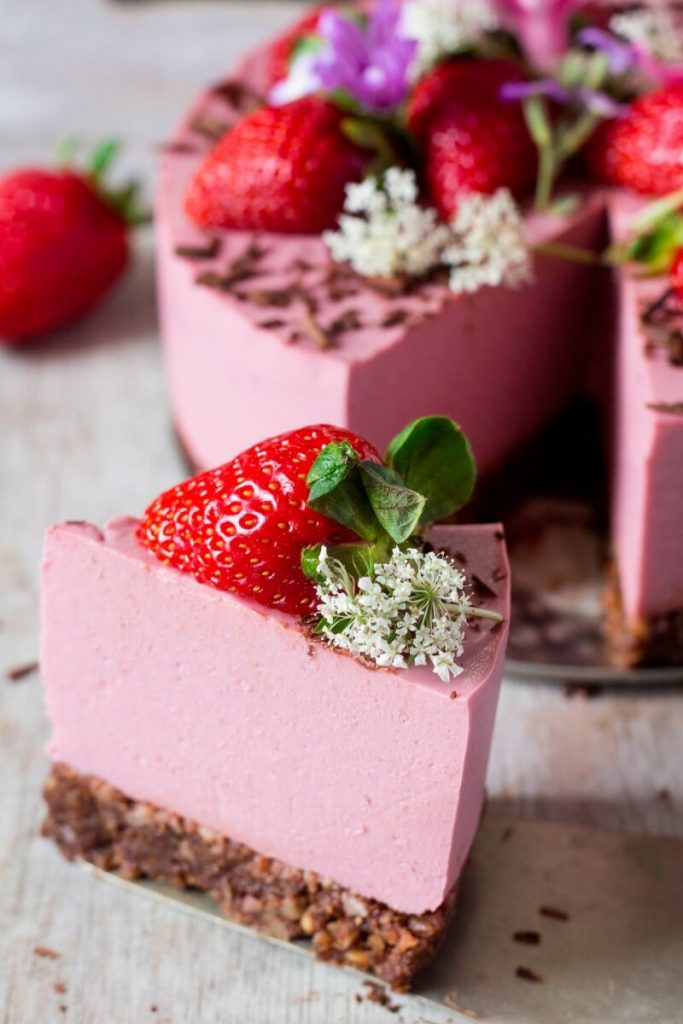 There is no need for coconut oil in this recipe. | Lazy Cat Kitchen 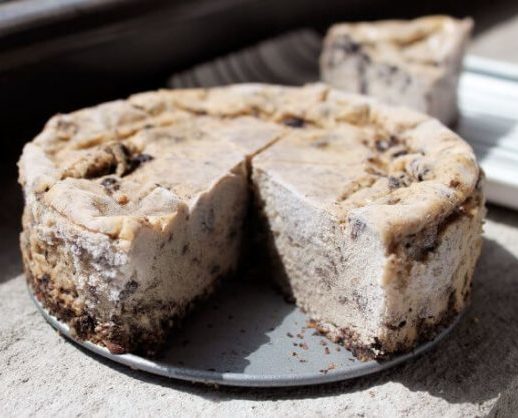 Why not add Oreos to your cheesecake? | Quiche a Week

Pretty much any dessert can be improved upon when you add Oreos. Oreo ice cream. Oreo milkshake. Oreo cupcakes. Cheesecake is no exception. This thick, baked, Oreo-infused vegan cheesecake holds up to those colossal slices at the Cheesecake Factory. So. Freaking. Good. 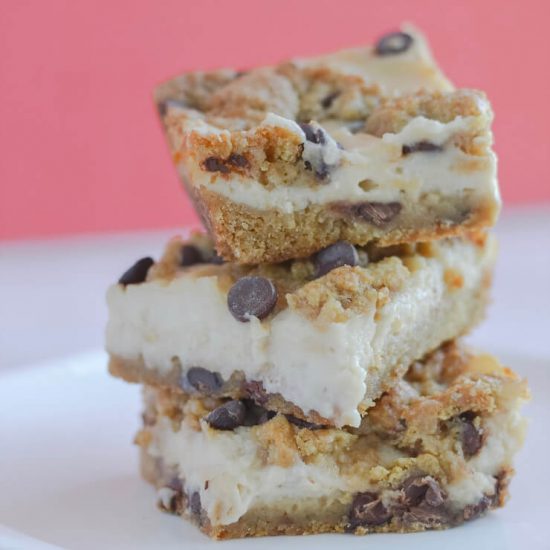 These cheesecake bars are a crowd-pleaser. | Vegan Guide to the Galaxy