Many things signal the start of the festive season, including Christmas lights, adverts, and your favorite classic holiday movies appearing on the TV. But arguably one of the best ways to get into the Christmas spirit is by sitting down with a glass of mulled wine and a mince pie. This time of year, there are plenty of vegan mince pies to choose from, whether you buy them or make them yourself.

What is a Mince Pie?

Mince pies are most commonly eaten in the UK at Christmas time. Nowadays they are normally vegetarian, but the original recipe — which dates all the way back to the 13th century — did include real meat.

The kind of mince pie you’ll find on the shelves in the modern day are filled with fruits and berries like raisins, sultanas, currants, as well as sugar. They also can include spices such as cinnamon or nutmeg. Mince pie pastry is often made with butter, however, there are many vegan versions available.

How to Make a Vegan Mince Pie

There are a few key steps to making a vegan mince pie; the first thing you need is pastry. You can choose to make this yourself, or you can opt to buy it in the store. Jus-Rol makes gluten-free puff pastry which is both vegan and ideal for making mince pies.

Naturally, making mincemeat is the most important part. Gather together your favorite fruits and berries and stir them together thoroughly. This is then left for a number of hours. When it’s cold, you can add your booze of choice — one of the most popular spirits to use is brandy.

There are a number of ways to make vegan mince pies. You can choose to make the pastry with almond, oat, or coconut milk, or a mixture of all three. If you like, you can even make them raw — use almonds and coconuts for the crust and fresh fruits for the filling.

If you’re too busy or just don’t fancy making mince pies at all, there are plenty of options in the stores to choose from. Here are seven vegan mince pies currently available in the UK. 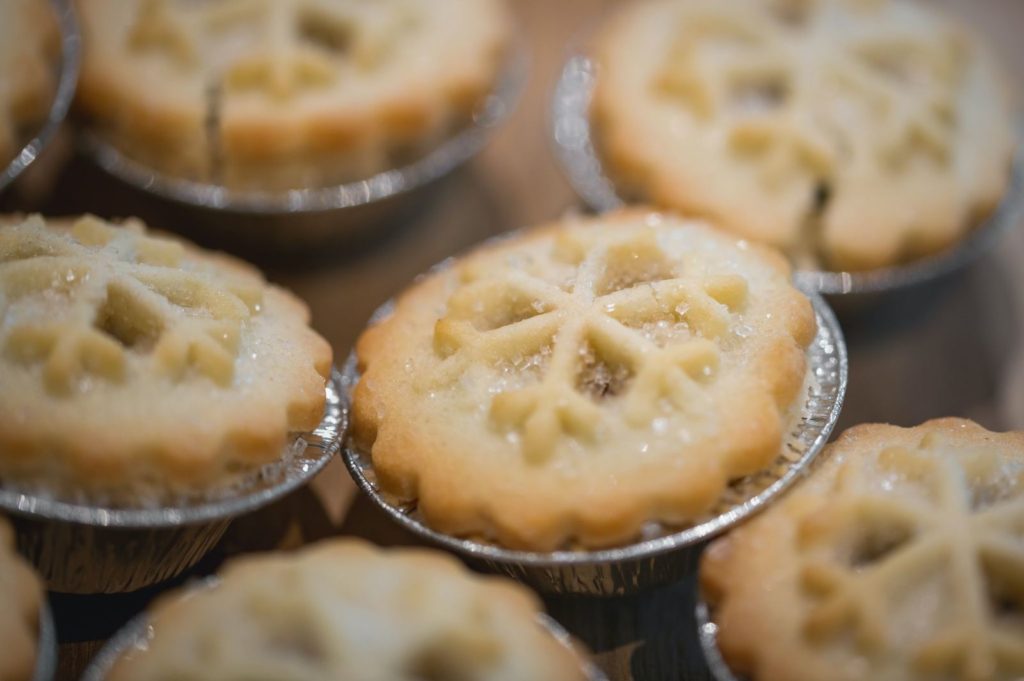 Make your own vegan mince pies at home or there are a number of options to buy. | Daniel Morris / Unsplash

7 Vegan Mince Pies Available in the UK This Christmas Season

In 2017, ASDA made headlines for being the UK’s first mainstream supermarket to launch vegan mince pies. This year, the plant-based sweet treats are returning once again. The crumbly treats are a hit with customers and have many five star reviews. One customer wrote on the chain’s website, “as far as commercially produced mince pies go, these, in my humble opinion, are some of the best I’ve ever tried.”

For the less hungry shopper, the well-reputed retailer is offering the Waitrose Christmas Gluten Free Mince Pies. Made without milk, the two-pack of pies features gluten-free pastry filled with vine fruit and cranberry mincemeat.

For those brave enough to admit that two mince pies just might not be enough, the Waitrose Christmas 4 Gluten Free Mince Pies are also available. Suitable for celiacs and vegan-friendly, these pies feature vine fruit mincemeat with spices, raisins, sultanas, currants, and mixed peel.

For the sugar-lovers out there, Sainsbury’s has got you covered with its Free From Iced Mince Pies. Featuring a sweet white icing top and cranberry and citrus mincemeat, these pies are also wheat-free, gluten-free, and milk free.

The chain is also selling vegan mince pies by Oggs. The vegan brand specializes in cakes and sweet treats, including a Zesty Lemon Cake and Salted Caramel Cakes. Its vegan star-topped mince pies are filled with spiced mincemeat, laced with brandy, and dusted with sugar. 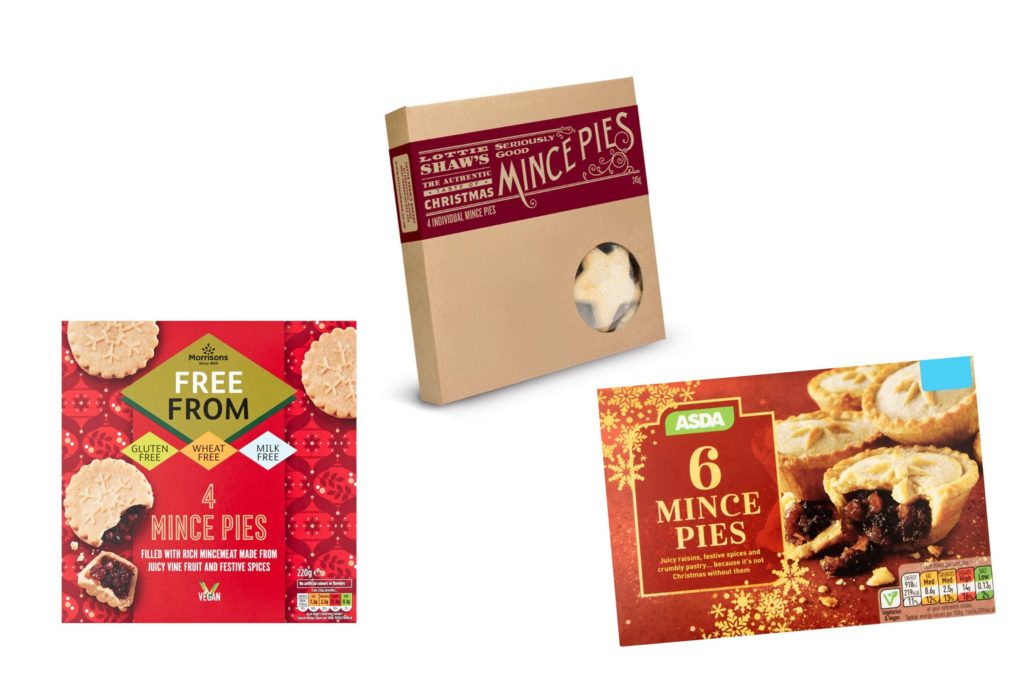 There are plenty of vegan mince pies to choose from in the UK.

Greggs, the largest bakery chain in the UK, hit headlines in 2019 for its now-iconic vegan sausage rolls. For Christmas, it’s once again offering consumers a vegan-friendly sweet mince pie.

The chain says, “It’s that time of year when you can enjoy our sweet mince pies! Baked in shop, our deliciously crumbly shortcrust pastry is filled with sweet mincemeat, made with vine fruits, Bramley apple, and candied orange and lemon peel – YUM!”

5. The Foods of Athenry

Sure to put stars in your eyes — or mouths — this Christmas, The Foods of Athenry Very Merry Christmas Starry Mince Pies feature seasonal fruits, nuts, and spices. Each pie is filled with 50 percent homemade fruit mince filling, which is enclosed in a sweet shortcrust gluten and wheat free pastry.

Available in packs of four, each box of Lottie Shaw’s vegan mince pies is fully recyclable. The brand promises that because each mince pie is shallow, each bite offers the perfect balance of spiced and fruity mincemeat to pastry.

They were even included in The Independent’s Best Mince Pie Review. The newspaper wrote, “these mouth-watering, shallow-filled pies are a decent size with thick and moreish pastry and a good dollop of tangy, boozy mincemeat.”

Morrisons Free From Mince Pies — which are vegan and wheat and gluten-free — feature shortcrust pastry and are filled with sweet, plump, festive fruits. They are a hit with some customers, with one reviewer stating they are the “perfect little mince pies” with “wonderful” texture. Another added that they were the best mince pies they had ever eaten.