(Updated November 27, 2019). If you’re looking to make healthier choices by cutting out processed meat from your diet, but you love an indulgent snack of sausages wrapped in bacon or pastry — aka pigs in blankets — the good news is you don’t have to miss out. Vegan pigs in a blanket are not only possible, but they’re just as tasty, if not tastier, than their meat-based counterpart. The only difference is, they’re healthier, more ethical, and kinder to the environment. 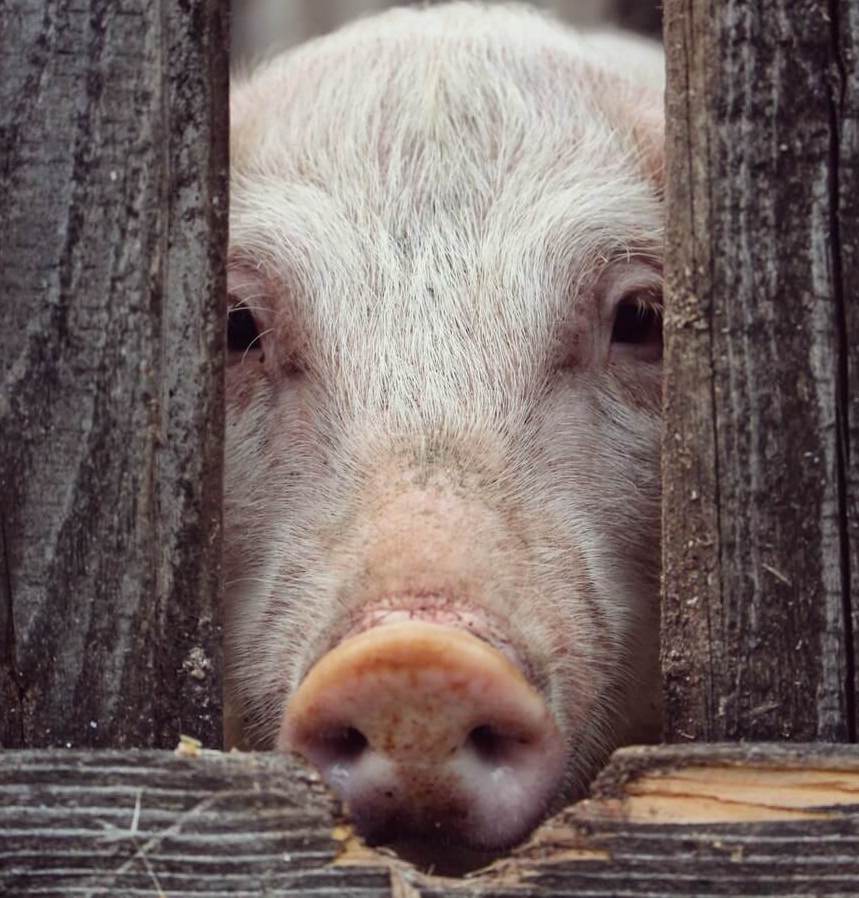 Most pig products in the U.S. are produced in factory farms.

What’s Wrong With Real Pigs in a Blanket?

For many, traditional pigs in a blanket are a staple when making a Christmas or ordinary roast dinner. However, for that meaty side to make it to the table, a whole lot of real pigs have to suffer.

According to animal rights charity Viva!, at least half of the world’s pig meat comes from intensive farming systems. In the UK, more than 90 percent of piglets raised for meat live in cramped conditions on factory farms. In the U.S., 98.3 percent come from similar conditions. Viva! notes that in the UK, only around one percent of piglets killed for meat spend their lives outside.

Processed meat isn’t healthy for humans either. According to an Oxford University study from earlier this year, eating three rashers of bacon a day could increase bowel cancer risk by  20 percent. Processed meat is also linked with an increased risk of heart disease and diabetes. Some experts believe a tax on processed meat could save thousands of lives a year.

There’s also an environmental element. Meat production is bad for the planet. The industry is responsible for a multitude of environmental issues, including high levels of greenhouse gas emissions. In 2018, the United Nations Environment Programme labeled tackling meat consumption as the world’s most urgent problem.

If you want to avoid the environmental, health, and ethical consequences of eating pig meat, consider opting for vegan pigs in blankets.

A number of supermarkets and brands offer plant-based sausages now, as well as meat-free bacon, so you can buy separately and assemble at home if you choose. If you don’t want to faff about with that, a few brands and supermarkets offer premade vegan pigs in blankets. 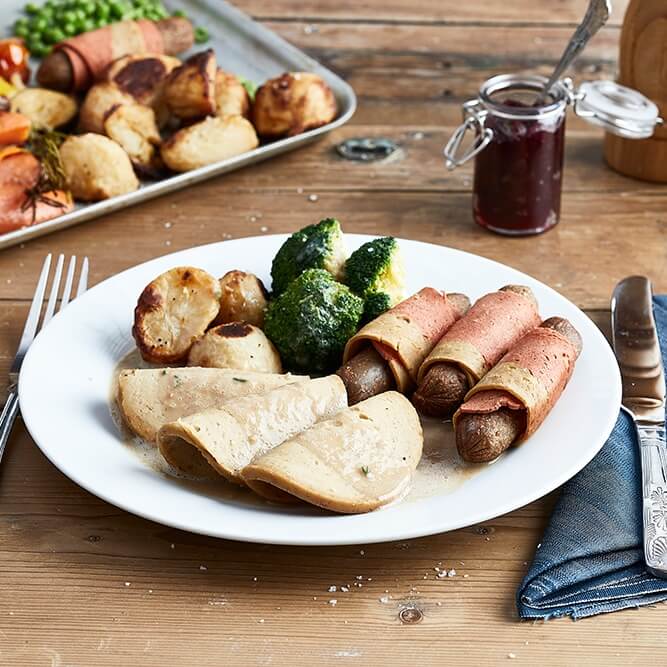 Vegan brand VBites offers a Meat-Free Celebration Roast, which comes with all the meat-free essentials for a Sunday roast, including rasher-wrapped-sausages and gravy. If you don’t fancy the turkey-style roast, you can buy the brand’s meatless sausages and bacon separately and assemble at home. 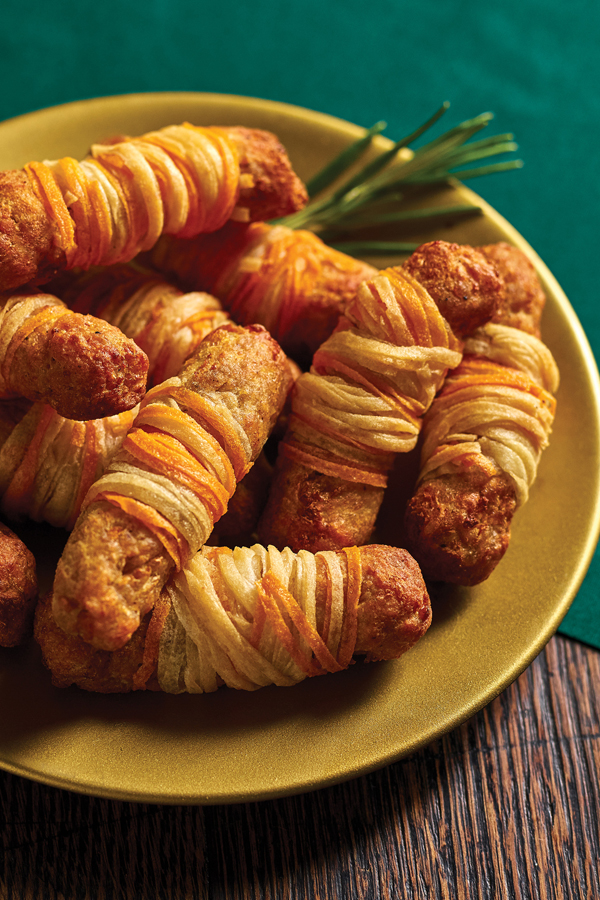 Morrisons’ vegan pigs in blankets are wrapped in streaky pastry.

UK supermarket chain Morrisons has launched its own version of plant-based pigs in blankets, ahead of the festive season. The Vegan No-Pigs in Blankets features a blend of jackfruit and chickpeas, wrapped in streaky pastry. 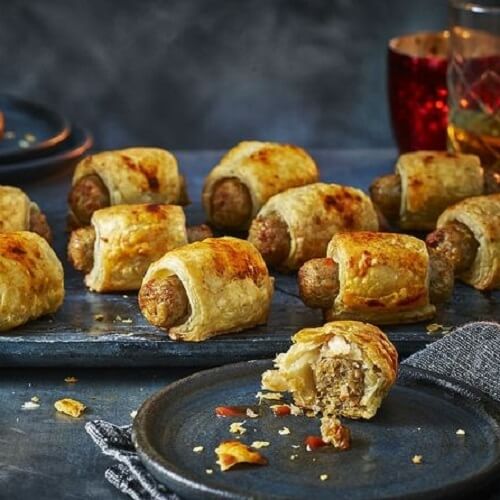 Like Morrisons, Marks & Spencer’s vegan answer to pigs in blankets involves pastry. For its Christmas food range, the chain has wrapped up plant-based cocktail sausages in flaky pastry and called it No Pigs in Duvets. 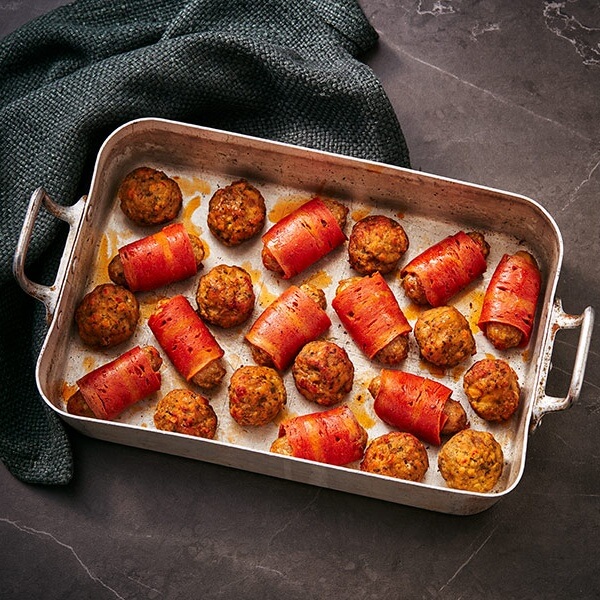 If you fancy trying your hand at making your own vegan pigs in blankets, here are 7 recipes you can make from home at Christmas and all year round. 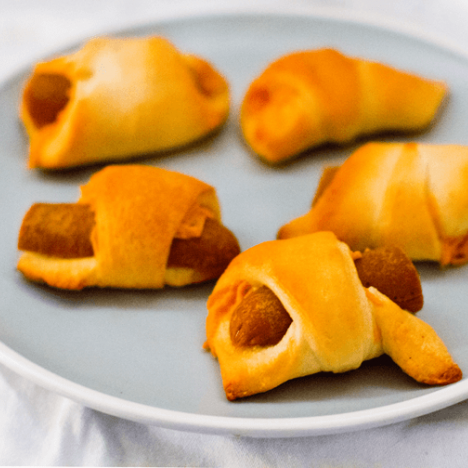 “I love pigs. In a blanket” | Healthy Happy Life 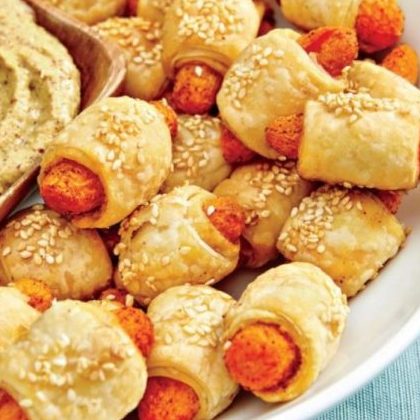 “I don’t have to tell you that these are the cutest things in the world! Darling little roasted carrots in puff pastry, because bunnies love carrots and real pigs deserve real blankets,” writes Food Republic author and “pioneer of plant-based cuisine” Isa Chandra Moskowitz. 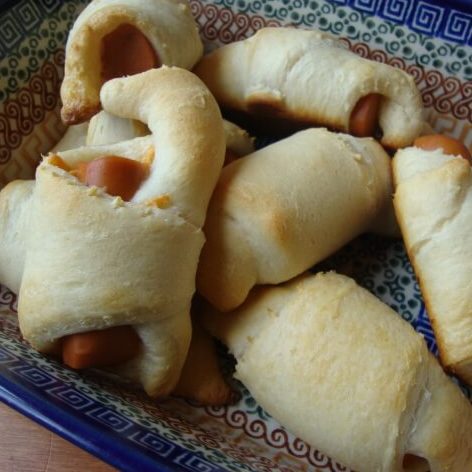 3. Vegan Pigs in a Blanket by Epicurean Vegan

This recipe is super easy to follow, breaking down every step, complete with photos. It calls for Daiya cheese, Pillsbury Crescent Rolls and Smart Dogs, or pretty much any vegan or veggie dog you fancy. 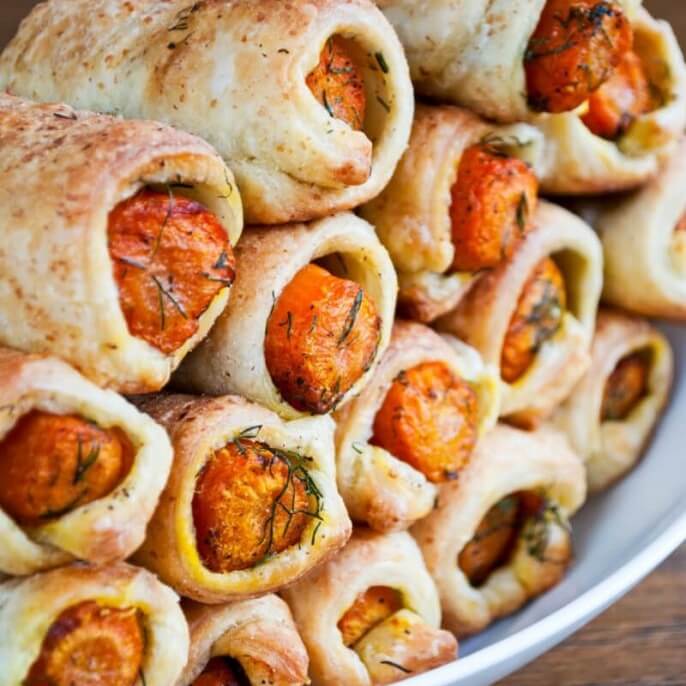 Carrots in a Blanket are cheap and simple to make. | Vegan Sandra

4. Carrots In a Blanket by Vegan Sandra

Vegan Sandra says, “I wish pigs in a blanket were really cute pigs in a warm blanket not sausages made out of actual pigs. And who needs sausages anyway when you have delicious, juicy and vibrant carrots?” She adds, “I just LOVE recipes like these – so simple, cheap and so delicious in its simplicity. Carrots really shine in this dish.” 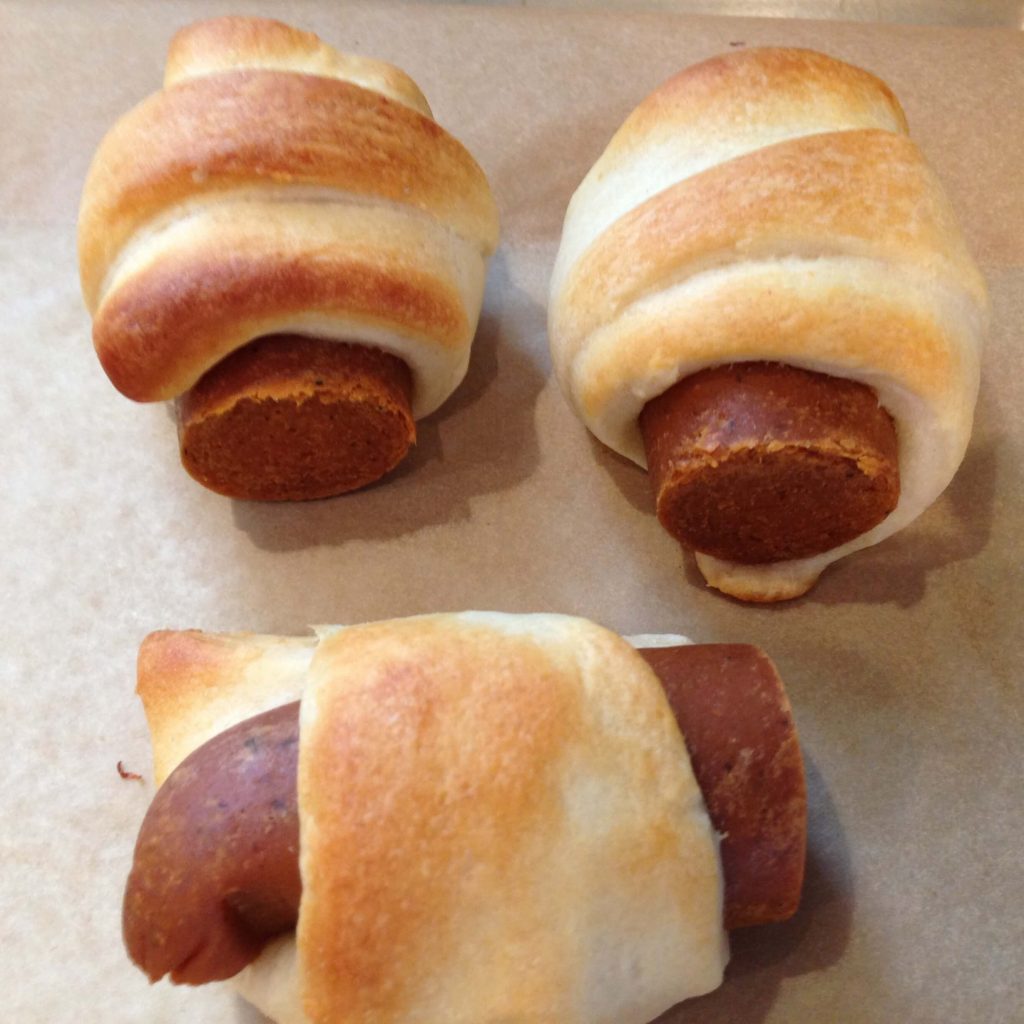 Does a recipe get any more indulgent than when it contains vegan cheese, bacon, pastry, and sausages? Nope. This is the ultimate comfort food. Like Michael Suchman from VeganMos highlights, this recipe gives you your favorite 1980s party food but without the cruelty. Like the author asks, why would anyone want to eat an animal like Esther? 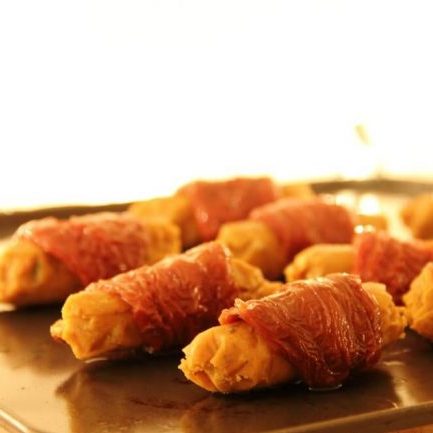 Enjoy homemade pigs in blankets at Christmas and all year round. | the Tofu Diaries

6. Homemade Vegan Pigs in a Blanket by the Tofu Diaries

This recipe was put together for Christmas time, but it’s so delicious, there’s nothing to stop you from enjoying it all year round. If you don’t fancy making your own chickpea sausages, or you simply don’t have the time, the Tofu Diaries recommends subbing them for Linda McCartney sausages or another variety of gluten-free sausage. 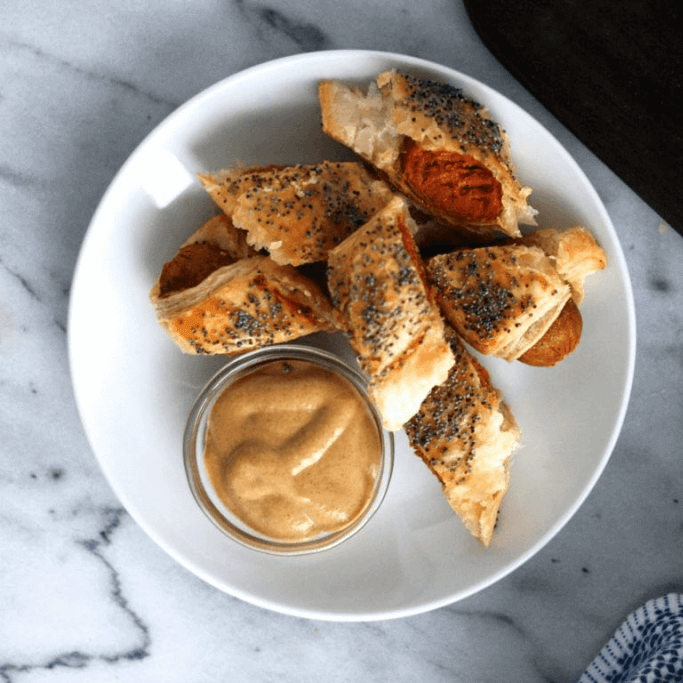 7. Dijon (Vegan) Pigs in a Blanket by Well Vegan

Whether it’s Christmas, you’re watching sports, hosting a social event, making a warming appetizer during a cold day, or cooling off in summer, these vegan “pigs in a blanket” are the perfect go-to recipe. It’s even complete with a veganized egg wash and Dijon mustard. “They bring the perfect balance of carbs, fat, and protein to keep those mid-day beers from sneaking up on you,” says recipe author Well Vegan. “Nobody wants that.”