A recent survey uncovered the business potential of plant-based products and specifically, the benefits it offers companies that clearly label their plant-based food as “vegan.”

The survey was facilitated by Animal Aid, one of the largest animal rights organizations in the UK. The more than 1,000 survey participants included vegans, vegetarians, and people reducing their consumption of meat.

The results found that a majority of people who purchase plant-based food, including meat-eaters, prefer items that are clearly labelled as “vegan.” Ninety-six percent of participants said they are more likely to buy a product that is marked vegan. Further, 69 percent of respondents stated they would switch supermarkets if a competitor began labelling their own-brand products as vegan.

Tesco and Sainsbury’s, which already label their own-brand plant-based products as vegan, were popular shopping locations for many respondents. Tesco attracted 54 percent of survey participants and Sainsbury’s was the preferred supermarket for 27 percent of people.

Labelling vegan products makes 62 percent of customers feel valued and leads to feelings of acceptance for 56 percent of shoppers, the survey revealed. 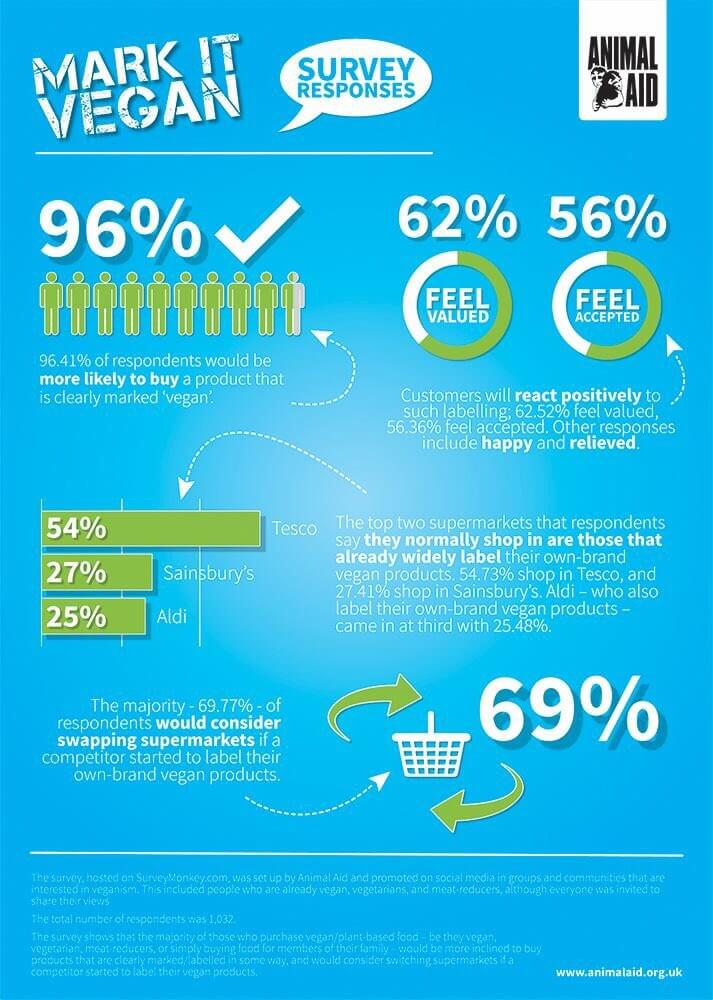 Tod Bradbury, Campaign Manager at Animal Aid, said in a statement: “The results of this survey are just another spoke on the wheel that is the increase in veganism and interest in plant-based eating.”

“It shows that not only will labelling make life easier for those of us who purchase vegan products – whether we are vegan, vegetarian, meat-reducers, or simply purchasing food for vegan family members –, but also it has the ability to encourage more people who shop for plant-based products to consider switching supermarkets,” he added.

Writer Amy Kennedy echoed the sentiment. Sharing the infographic online, she said: “It’s so important that products get marked as vegan … it makes the movement valid and shows how accessible it is!”

Animal Aid launched its #MarkItVegan campaign in 2016. The initiative encourages supermarkets in Britain to clearly label their plant-based own-brand products as vegan. In recent years, major retailers like Tesco, Morrisons, Aldi, and Asda have begun marking their plant-based offerings as vegan. “This survey shows why it is time for the others to follow suit,” Bradbury noted.