We’re living in the vegan ice cream renaissance. Not too long ago, it would have been a challenge to find more than one kind of dairy-free treat in your local supermarket. But these days, most stores have entire freezers dedicated just to vegan ice cream, sorbets, and other frozen treats. It’s a great situation for dessert lovers, but a predicament for anyone who has trouble choosing. We’re here to help. 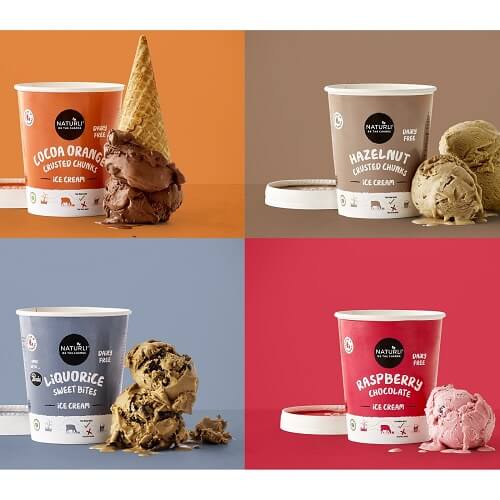 The need to cut carbon emissions is dire — and animal products including milk, take a majority of the blame. Milk requires more resources like land, water, and food compared to plant-based ingredients. Worldwide, there are about 1.5 billion cows raised for beef or dairy. Cattle produce methane, which experts estimate is between 23 to 30 times more potent than CO2. Every cow produces 30 to 50 gallons of methane a day. According to the FAO, cattle emit 3.1 gigatonnes of CO2-equiv. of methane a year.

What Is Vegan Ice Cream Made From?

There are a lot of ways to make ice cream without the cow these days.
If you can make plant-based milk from it, then it’s likely that there’s an ice cream to match. Vegan ice cream bases include almond, soy, coconut, and cashew. Newer innovations include oat milk, avocado, banana, and even dairy, faba bean protein or mung bean protein.
Every base and every brand has its own unique flavor and texture to offer — here are nine to try. 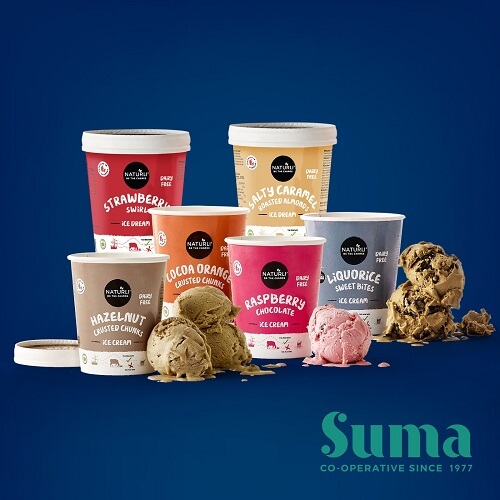 Naturli’ Foods vegan ice cream is made from oats and coconut milk.

Keep cool this summer with Naturli’ vegan Ice Dream made from oats and coconut. The Denmark-based brand launched its range of dairy-free ice cream in the UK this year. The lineup features a six ice cream unique flavors: Salty Caramel With Roasted Almonds, Cocoa Orange, Hazelnut, Raspberry Chocolate, Liquorice Sweet Bites, and Strawberry Swirl. The first five are made from a dairy-free oat milk base — featuring Danish oats — while Strawberry Swirl is made from coconut, so it’s also gluten-free. Every exclusive ice cream flavor has its own unique quirk: Liquorice Sweet Bites has bits of real licorice candy made by Finnish brand Panda. The Raspberry Chocolate has a fruity base made from 19 percent real raspberry, swirled with pieces of Callebaut chocolate. Cocoa Orange features a chocolatey cacao base rounded out by the citrusy notes of real orange oil, plus crunchy caramelized Italian hazelnuts.

Naturli’ Ice Dream has a rich, creamy texture that scoops easily right out of the freezer, so, there’s no need to let your vegan ice cream thaw on the counter for a few minutes before digging in on a hot summer day. Since it’s dairy-free, it’s also more sustainable than traditional dairy ice cream, an ethos that Naturli’ embodies. As the brand says, “Eat Plants – There is no Planet B!” All Naturli’ products are made in Denmark and 100 percent vegan.

All six Naturli’ Ice Dream flavors are available online by the pint from Suma Wholefoods, a fair trade and vegetarian co-op founded in 1977. 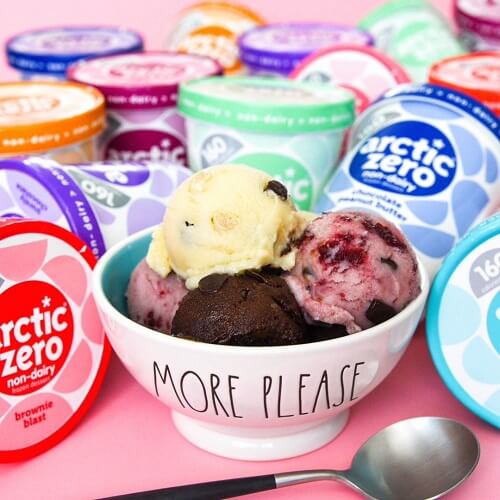 You don’t have to sacrifice flavor for low-calorie ice cream. | Arctic Zero

Better-for-you ice cream brand Arctic Zero cracked the code to making low-calorie vegan ice cream that doesn’t sacrifice flavor or texture. The unique dairy-free base is made only from clean, non-GMO ingredients like faba bean protein and never any sugar alcohols: only monk fruit sweetener and a touch of organic cane sugar. The newly formulated frozen dessert has a rich, creamy flavor without the fat or calories of traditional ice cream. One pint ranges from just 160 to 320 calories, so there’s less guilt if you happen to finish off a pint on a sitting — it happens.

“For me, research on clean ingredients and listening to our customers is priority. I will always push the limits on what’s possible to create in the ‘better for you’ category. I am excited to continue to evolve as my most recent creation is composed of a plant-based faba bean protein.” says Greg Holtman, Founder of Arctic Zero. 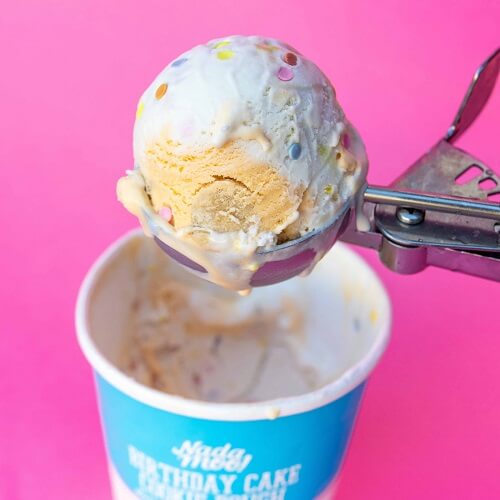 Family-owned brand NadaMoo! has been making vegan ice cream for over a decade. | NadaMoo!

Family-owned vegan ice cream brand NadaMoo! was founded in Austin, Texas in 2005. Since then, the company has churned out 16 dairy-free ice cream flavors, a brick-and-mortar scoop shop in Texas, and made its way to the freezer aisle of grocery stores across the U.S. and Canada.

Made from organic coconut milk, NadaMoo! Ice cream has a light, but creamy texture and a wide range of flavors from Dutch Chocolate and Vanilla…Aaah to the playful Marshmallow Stardust — which tastes like real marshmallow and is speckled with confetti sprinkles — and Peach Cobbler. NadaMoo! Ice cream contains healthy fats, no cholesterol, and is made from environmentally sustainable, non-GMO, and fair trade ingredients.

“For more than 10 years, we’ve been committed to offering ice cream enthusiasts a healthier and more sustainable alternative to satisfy frozen dessert cravings,” says Daniel Nicholson, CEO and President, NadaMoo!. “We’re excited to advance the dairy-free revolution – one scoop or pint at a time.” 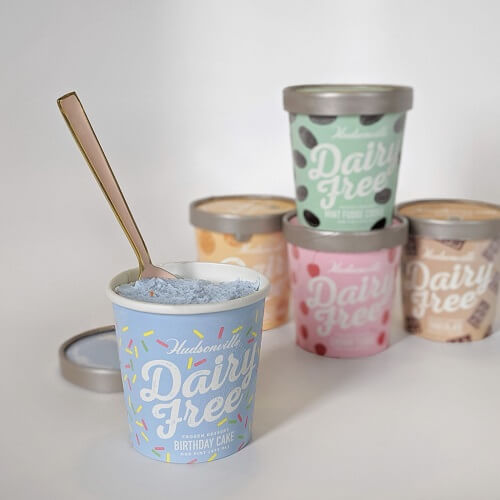 Dairy-free doesn’t have to mean you miss out on flavor. Even longtime ice cream makers believe that vegan ice cream can be just as good as, if not better than, the traditional treat. Iconic Midwest ice cream brand Hudsonville built its reputation on creating delicious frozen dessert. Founded more than 90 years ago, the company turned its attention to crafting indulgent dairy-free ice cream from a blend of coconut cream and oat milk.

Hudsonville developed its vegan ice cream over the course of two years in order to ensure that it delivers the same taste, texture, and quality as the original dairy recipe from the 1920s. It’s available in seven sweet flavors: Birthday Cake (which, naturally, has sprinkles), Caramel Cookie Dough, Cherry Fudge, Chocolate, Mint Fudge Cookie, Peanut Butter Truffle, and S’mores. Husonville aims to make life sweeter. Its vegan ice cream is perfect for parties (pro-tip: serve it with dairy-free coconut whipped cream), sharing on a movie night, or keeping all to yourself because we all need to treat ourselves every now and then.

Hudsonville’s vegan ice cream is available at major retailers throughout the Midwest and can be found using the scoop locator on the website. 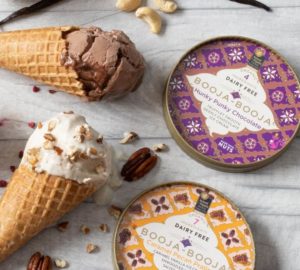 The team behind award-winning British vegan ice cream brand Booja Booja are experts in crafting delicious flavors with minimal, all organic ingredients — no pint uses more than seven. The creamy base is made from cashews, so it’s soy-free and it’s sweetened with agave or coconut syrup. There are six flavors available: Caramel Pecan Praline, Hunky Punky Chocolate, Keep Smiling Vanilla M’Gorilla, Chocolate Salted Caramel, Raspberry Ripple, and Hazelnut Chocolate Truffle. Booja Booja ice cream is available at retailers across the UK, including Ocado, Planet Organic, and Holland and Barrett.

Brooklyn-based artisanal ice cream brand Van Leeuwen started out as a little yellow ice cream truck back in 2008. Van Leeuwen makes its vegan ice cream from a blend of cashews, coconut, and cocoa butter, giving it the dense texture and rich flavor of premium dairy ice cream. Flavors range from Chocolate Chip Cookie Dough and Chocolate to the crunchy candy-swirled Honeycomb — which, despite the name, is honey-free. The ice cream brand now has scoop shops across New York City and Los Angeles with vegan-friendly toppings like chocolate sauce and whipped cream. Its pints can be found in Whole Foods Markets and natural grocery stores across the Northeast and online. 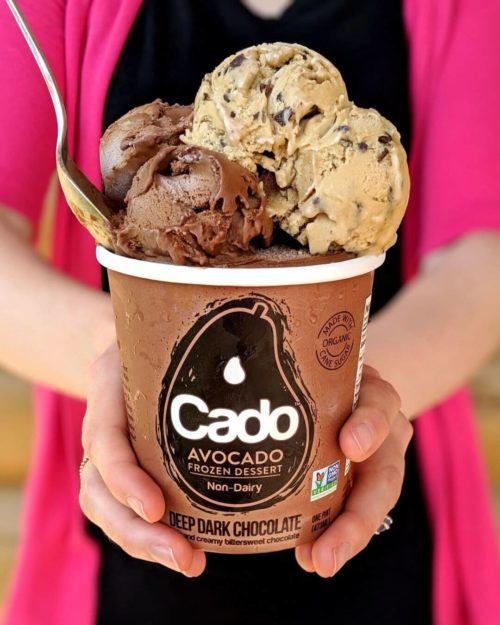 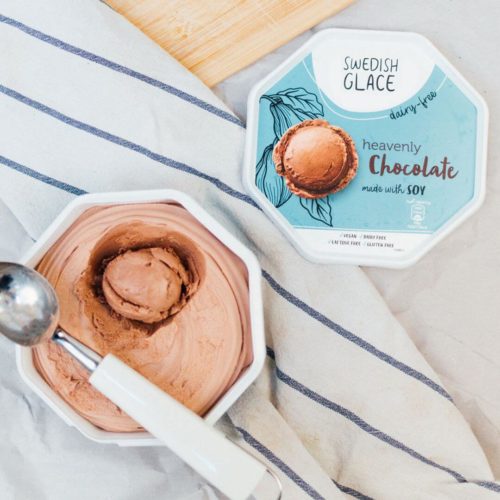 UK-based brand Swedish Glace believes in promoting kindness in a world that can be less so. It makes dairy-free ice cream flavors from soy or almond in flavors such as Heavenly Chocolate, Delightful Raspberry, and Almond With a Cocoa Twist as well as chocolate-coated ice cream bars. All Swedish Glace flavors are dairy-free and gluten-free. It’s readily available in major UK retailers like Tesco, Asda, Sainsbury’s, Ocado, and Morrisons. 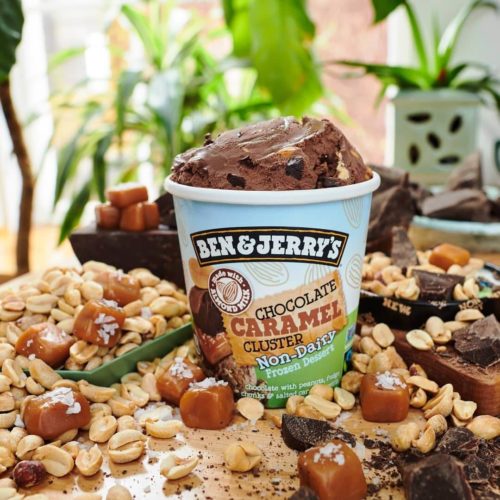 Vermont-based ice cream brand Ben & Jerry’s is known the world over for its over-the-top ice cream flavors and premium texture. It first launched vegan ice cream in 2016 and has added new flavors each year, from dairy-free versions of classics like Cherry Garcia and Chocolate Chip Cookie Dough to originals such as Peanut Butter Half Baked and Coconut Seven Layer Bar. Ben & Jerry’s makes its vegan ice cream from almond milk, creating a creamy, neutral base offers the same quality as its dairy ice cream. Ben & Jerry’s is available in the US, UK, and Australia in major retailers.