(Updated October, 2020) Ahh, fall. You’ve been missed. Leaves are beginning to turn and the cooler temperature sparks nostalgic memories of waiting for the school bus in the crisp autumn air. The days are getting shorter, it’s finally acceptable to break out the hoodies and flannels, and Starbucks seasonal drinks are here. The world’s largest coffee chain house has plenty of vegan options year-round and fall is no exception.

Starbucks flavors its drinks with clear syrups. The basic flavors are vanilla, mocha, and hazelnut, and then there are seasonal options like toffee nut, cinnamon dolce, and peppermint. The latter three are also available all year round, but Starbucks doesn’t put them on the menu until it’s chilly weather season.

Many drinks are topped with sauces, which, with the exception of the mocha sauce, contain dairy. Unfortunately, this also includes the pumpkin spice sauce, which contains condensed milk. So, neither the famous PSL nor the new Pumpkin Spice Cold Brew can be made vegan. In the UK, Starbucks offers a vegan pumpkin spice syrup.

A lot of drinks also come with toppings. Java chips and the cinnamon dolce topping are not vegan. But, the topping for the pumpkin spice latte is — it’s a warming blend of cinnamon, ginger, nutmeg, and clove. The vanilla bean powder is also vegan and can be added to any hot drink. 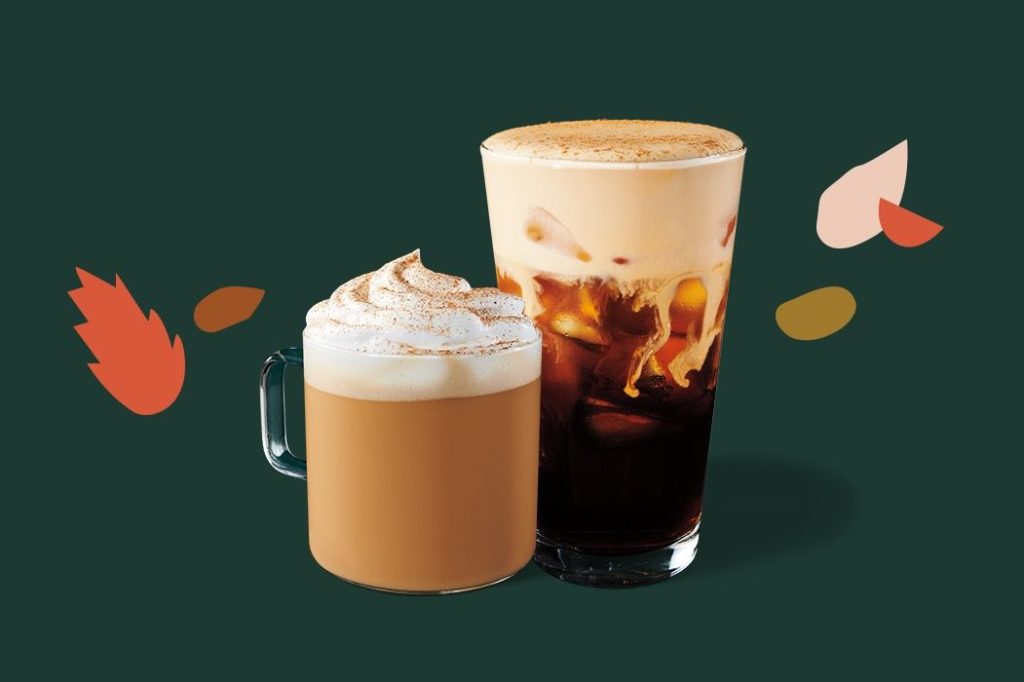 In the U.S., Starbucks offers soy, almond, or coconut milk. Oat milk is available at locations throughout the UK and the E.U., as well as nearly 3,000 stores across North America.

Most baristas recommend asking for soy milk in espresso drinks. It yields a creamier foam than Starbucks’ other dairy-free options and provides nutty notes that complement fall flavors like caramel, mocha, and toffee. You still have to pay extra for vegan milk at Starbucks, but more customers are putting pressure on the company to stop the upcharge. The company has even admitted that dairy is not sustainable.

You’re not restricted to only what’s on the menu at Starbucks. You can create a custom vegan drink using any of the ingredients above. If you’re ordering a drink from the “secret menu” — ie a custom beverage, like the Butterbeer latte — keep in mind that your barista might not know the recipe. Come prepared with the ingredients list. Your barista will thank you. 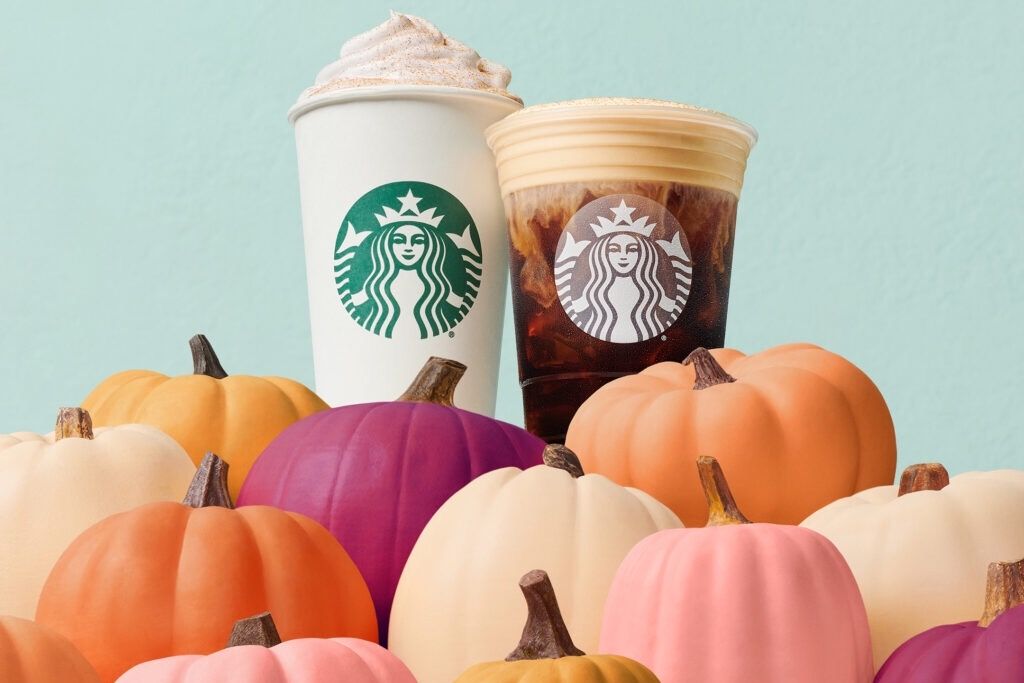 No Coffee, No Problem

Not into coffee? Starbucks also has a tea menu that you can customize with syrups, spices, and even steamed dairy-free milk. It also has hot chocolate and apple juice, which can be served steamed.

Does Starbucks Have Vegan Food?

Starbucks doesn’t offer any seasonal vegan pastries, but it does have options you can pair with your drink. For breakfast, you can order oatmeal with water or dairy-free milk or a sprouted grain bagel and the plain bagel are vegan (get it toasted with the avocado spread on the side). There’s also a Vegan Superberry Açaí bowl and snack options like Hippeas, dried fruit bars, and fresh fruit. In June 2020, Starbucks added sandwiches featuring Impossible Foods’ breakfast sausages to the menu in its U.S. locations. 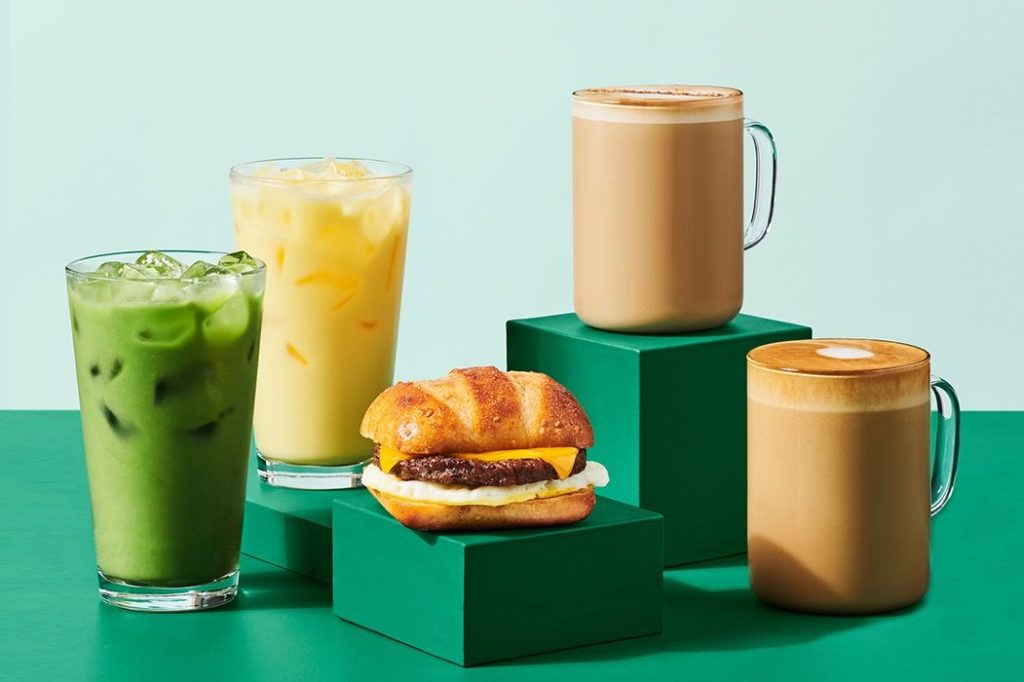 Toffee nut syrup is available all year round, but it’s not on the menu boards until fall rolls in. Just be sure to order it with dairy-free milk and without the toffee nut sprinkles (which contain dairy) and whipped cream and you have yourself a cozy fall drink to sip on while you watch the leaves fall, or what have you.

This chilly weather concoction combines toffee nut syrup with mocha sauce. To make it vegan, order it with dairy-free milk and ask for it without the whipped topping or caramel sauce drizzle. The special topping — a blend of turbinado sugar and sea salt — is free from animal-derived ingredients. This drink is also available in Frappuccino form.

You won’t find this custom creation on the menu. Ask your barista for a soy cappuccino with two pumps of cinnamon dolce syrup, and two scoops of vanilla bean powder. It’s sweet, creamy, and the spices are just right. Its flavor is reminiscent of those gooey cinnamon buns that beckon customers at shopping malls across the country.

Get your chocolate fix. Starbucks makes hot chocolate by blending its dairy-free mocha sauce and vanilla syrup with milk. Order it dairy-free and leave off the whipped topping to make it dairy-free. You can also customize it with any of the other syrups, such as hazelnut, cinnamon dolce, toffee nut, or caramel.

Starbucks has apple juice on its menu year-round. Order it steamed with two pumps caramel syrup and two pumps of cinnamon dolce syrup for a cozy apple cider that channels all the best fall flavors.

If you’re craving a latte, but not too keen on caffeine or coffee flavors, you can order a crème drink. The Cinnamon Dolce and Vanilla Crème drinks can be made vegan if you order dairy-free and leave off the whipped topping, but you could also ask your barista to make you a caffeine-free drink with any of the vegan syrups.

This famous beverage from Starbucks “secret menu” is a delight to more than just Harry Potter fans. To order a vegan Butterbeer Latte, ask for a dairy-free latte with two pumps caramel syrup, two pumps cinnamon dolce syrup, and two pumps toffee nut syrup. Starbucks Secret Menu recommends topping it with salted caramel bits and whipped topping, but you can swap in the sea salt topping instead. If you’re not feeling a hot drink, you can also order this in Frappuccino form.

This coffee-free latte is an infusion of black tea with notes of bergamot and lavender. Get it with your favorite vegan milk and enjoy.

The regular chai latte on the menu contains a premade concentrate that’s sweetened with honey. For a honey-free chai latte, order a regular Teavana Chai Tea with dairy-free steamed milk. Try it with a scoop of vanilla powder.