The collection includes products like the Baddie Double Perks Rainbow Sheet Boob Mask, a vitamin C infused mask — that happen to look like like giant rainbow pasties — with promises to “visibly perk up your pair.” Typically featured in face serums, vitamin C accelerates collagen and elastin production when applied to the skin. 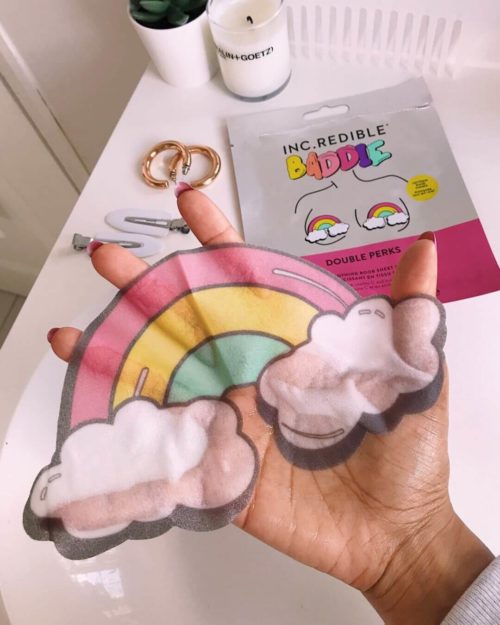 “Collagen is the protein fibers that make skin plump and prevent sagging; elastin are also protein fibers that help skin bounce back,” Susie Wang, co-founder of vegan beauty brand 100% Pure, told the Huffington Post. Wang patented a method of keeping vitamin C in skincare products from oxidizing, a common issue that’s earned the ingredient a reputation for being difficult to formulate.

Winkle’s collection also includes clear, strawberry-scented vegan lip gloss infused with vitamin B12, which nourishes and plumps. There’s also a rainbow highlighter, but it contains carmine — an ingredient derived from the crushed shell of cochineal beetles — which is used to give food and cosmetic ingredients a vibrant red color. But soon, there may be a vegan solution to carmine, thanks to a fiery red sweet potato developed by Danish scientists.

For the month of June, $1 from Baddie Winkle’s collab will go to the Tides Foundation, a nonprofit charity that supports social justice, education access, and environmental sustainability. 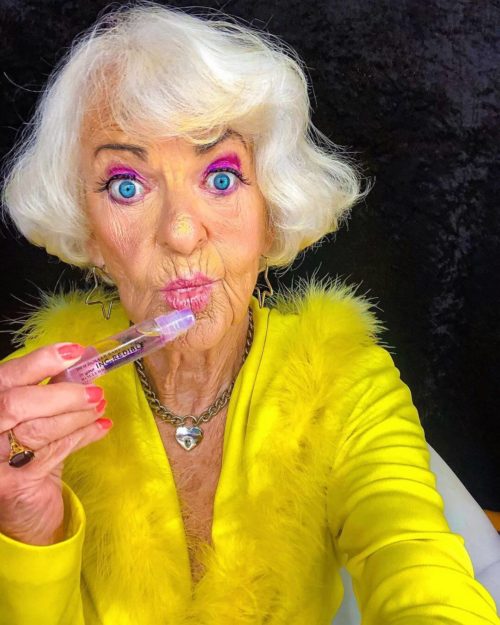 Prior to social media stardom, Winkle managed a small 15-acre farm in Waco, Kentucky. Today, she has an Instagram follower count of 3.8 million, including the likes of Miley Cyrus and Paris Hilton. She served as a muse for cruelty-free makeup brand Urban Decay, dazzled in an incredible crystal-studded see-through bodysuit at the 2016 MTV Music Awards, and in 2017, became a published author. She’s also an advocate of legal cannabis. Her tagline, “stealing ur man since 1928,” is as bold as her outfits.

“I think they saw a great-grandmother that didn’t care what anybody thought about her. ‘Here’s a rebel. We like her,’ ” Winkle mused on why her style resonated with so many people.