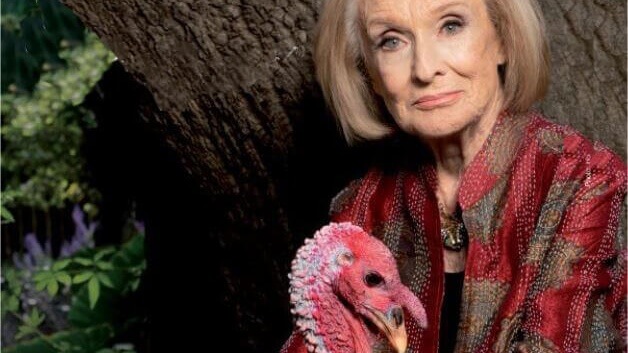 American actor and comedian Cloris Leachman is “ninety-f*cking-two years old” (coming onto “ninety-f*cking-three”) and hasn’t eaten meat in more than four decades. In a recent ad for People for the Ethical Treatment of Animals (PETA), Leachman cuddles a rescued turkey and urges people to go vegetarian.

In the new campaign, Leachman gets up close and personal with Frank, a six-month-old turkey who was destined for slaughter but now enjoys “a life of freedom” at a rescue sanctuary, PETA writes in a press release.

“There’s no reason to eat animals,” Leachman states in the ad. “When you’re eating one you think, ‘Ew, I’m eating an animal that just lost its life.'”

In the United States alone, roughly 245 million turkeys are slaughtered for their meat every year. Most of these creatures spend their lives in factory farms and have no federal legal protection. Leachman urges viewers to “step out of your dark shadow” and ditch the animal product for good.

“Anything takes a little getting used to but when you realize what you’re really doing – you’re saving the Earth,” she says.

“I don’t eat animals, you don’t want to either,” she states. “Be a little progressive. If you wouldn’t eat a dog, why would you want to eat a turkey?”

Leachman’s creative career has spanned for more than seven decades. In this time, she has won eight Primetime Emmy Awards, a Daytime Emmy Award, and an Academy Award (for her role in “The Last Picture Show“).

According to IMDB, she has more than 280 credits in film and television. Not letting her age slow her down, Leachman set a record when she appeared on “Dancing with the Stars” at the age of 82. Speaking to PETA, the performer credited her longevity to her meat-free diet.

A growing bank of research links plant-based foods with a longer life expectancy. Meat is said to increase the risk of developing diseases like cancer, heart disease, and diabetes while studies suggest that vegan and vegetarian foods can prevent and treat illness.