Film buffs will recognize Wahlberg for both his comedic and dramatic roles. He was nominated for Best Supporting Actor for his work in “The Departed,” and he also gained popularity by starring in the adult comedy, “Ted.” Beyond his work in the entertainment industry, Wahlberg is a partner in his family burger chain, Wahlburgers. The casual eatery has locations across the US, as well as two in Canada. While not vegan, the menu does offer the Impossible Burger, though it is served with cheese. Based on the animal-heavy menu of his own restaurant, trying a vegan concept is out of character for Wahlberg. 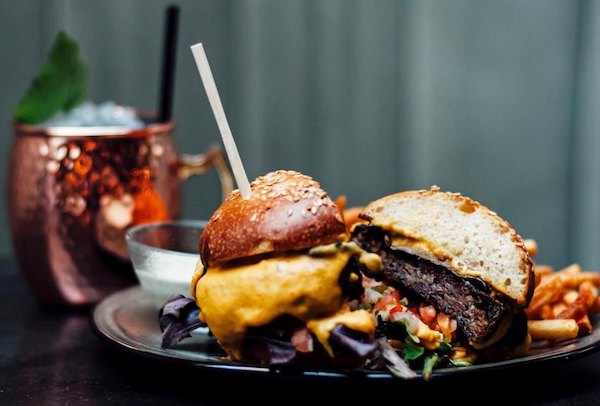 Planta, a plant-based Toronto restaurant concept, just debuted in Miami on March 1, 2018. According to Miami.com, the new restaurant “makes vegan dining cool and mainstream.” The menu features an array of upscale veganized dishes, including plant-based sushi, charred “octopus,” artisan pizzas, truffled pasta, and even a Planta burger. The dishes are devoid of vegan meat, rather, vegetables are transformed into familiar favorites by skilled chefs using innovative culinary techniques. The restaurant features two dining rooms, a vegan sushi bar, a cocktail bar, and an outdoor terrace with its own rooftop garden.

Although Wahlberg and Gronkowski are decidedly not vegan, the two entertained the camera crew as they plowed through their plant-based dishes and chomped on fist-fulls of herbs from the garden.

With this new vegan concept, Miami is quickly becoming a plant-based hot spot. It is now home to several upscale and trendy vegan eateries, such as Matthew Kenney’s Plnthouse, Plant, and the latest fast-casual concept, Chef Chloe and the Vegan Cafe. Miami is also a favorite destination for plant-based athletes and influencers, such as vegan power couple Rich Roll and Julie Piatt. The couple have premiered their cookbooks and held retreats in this upcoming vegan metropolis.