The innovative material is made from mycelium, the roots of mushrooms.

“We are thrilled to be working with partners who recognize that we are in a race to develop sustainable solutions to conventional technologies,” Dan Widmaier. Bolt Threads’ CEO, said in a press release.

He explained that the new consortium will help scale Mylo.

“[The companies] collectively represent hundreds of millions of square feet of potential demand for Mylo,” he said.

But, above all, Widmaier said the new association will help further the development of materials and products that support a more sustainable future.

The California-based biotech company develops sustainable materials for the beauty and apparel industries. And Mylo is just one of the vegan materials that it’s developed since its inception in 2009.

It created a vegan silk called Microsilk. Bolt Threads managed to create the material sustainably and without the use of spiders.

The yeast-based fiber shares the same properties as its animal-derived counterpart—it’s strong, elastic, durable, and soft. And in the process of creating the material, the company also developed a vegan silk protein, which is used in moisturizers and creams.

In addition to being cruelty-free, the company’s new mycelium-based leather is also sustainable. It takes less than two weeks to grow, emits fewer greenhouses gases, and uses less water and resources than animal leather.

Bolt Threads created the vegan textile in collaboration with Ecovative. The New York-based startup initially developed the mushroom material for its packaging.

In order to embrace animal-free fashion, a number of brands already use vegan leather made from mushrooms and mycelium.

German-based brand ZVNDER creates mushroom-based vegan leather. It hand-harvests its mushrooms from a Romanian forest and then turns them into a suede-like material. The material is then used to make hats, wallets, and sneakers.

In 2018, Stella McCartney debuted the Falabella handbag made from Mylo at London’s Victoria & Albert Museum’s “Fashioned from Nature” exhibit.

“Many people associate leather with luxury but since the beginning, I always wanted to approach things in a different way because killing animals for the sake of fashion is quite simply not acceptable,” the designer said. “Working so closely with Bolt Threads since 2017 has been a career-changing experience and I cannot wait to launch Mylo products to market.”

The consortium will begin bringing Mylo-based products to market next year. 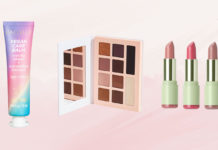