(Updated July 10, 2020) | Adidas’ classic leather shoe collection just got a vegan makeover. Last month, it released new versions of two of its iconic shoes. The revamped Samba and Continental 80 designs are made with vegan materials.

The two new sneakers are part of the brand’s “Our Icons Go Vegans” range. The shoes have the same “look and feel” as the originals, but are made with PU-coated recycled polyester instead of animal-based materials.

The Continental 80’s midsole also consists of an algae-based EVA foam. According to Adidas, this foam helps to clean around 30 liters of polluted lake water through the production process. The cupsole is made with 90 percent natural rubber and 10 percent waste rubber.

Each of the new designs features an embossed patch with the words “Adidas Originals Vegan.” 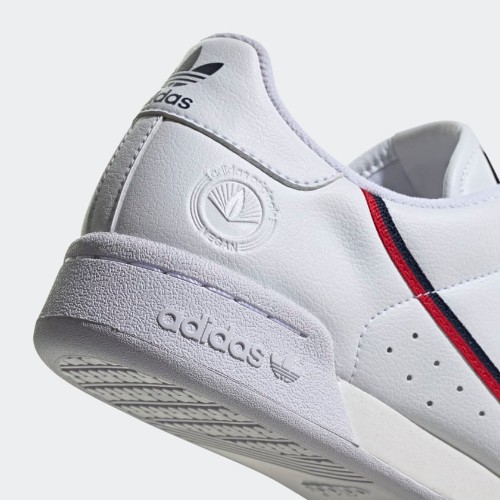 Adidas is no stranger to vegan designs. At the end of 2019, it teamed up with ethical designer Stella McCartney to launch a new vegan Stan Smith sneaker. The duo first teamed up to launch the shoes in 2018.

McCartney told Vogue that the original collaboration was her idea. “A few years ago my husband commissioned Adidas to make me a special pair of vegetarian Stan Smiths for my birthday as he knew how much I love the iconic trainer,” she said. “It got me thinking. Every time I saw the Adidas team I’d say, ‘why can’t you make all your Stan Smiths veggie?'”

The latest design features brightly colored rainbow laces, and, instead of Adidas stripes, punched-out rainbow stars. McCartney has also created athletic wear for the brand, including leggings and sports bras.

As well as McCartney, the sportswear manufacturer has released shoes in collaboration with Parley for the Oceans. Last year, it launched the Terrex Two Parley, made with Parley’s recycled ocean plastic yarn.

The organization collects plastic from beaches and coastal towns. The plastic is then sent to Taiwan to be spun into yarn.

Adidas first partnered with Parley in 2015. In 2018, Erik Liedtke, an executive board member for Global Brands Adidas Group, told Forbes: “Adidas teamed up with Parley to help spread awareness and transform ocean plastic pollution into high-performance sportswear, spinning the problem into a solution. The threat into a thread.”