Updated July 10, 2019. Vegan Impossible Burgers are about to touchdown in London for the first time. Air New Zealand, the nation’s leading airline, launched the meat-free burgers on its Los Angeles-London flights today.

The Impossible Burger will be available to guests in the Business Premier Cabin from now until October, according to Aviation Pros. The realistic plant-based burger is made from soy protein and is known for its realistic taste and texture.

According to Air New Zealand’s senior manager for customer experience Niki Chave, customers have been asking the airline to make the Impossible Burger available on the route. “The Impossible Burger has been a customer favourite and we’re confident it will appeal to travellers heading to Heathrow,” she said in a statement. 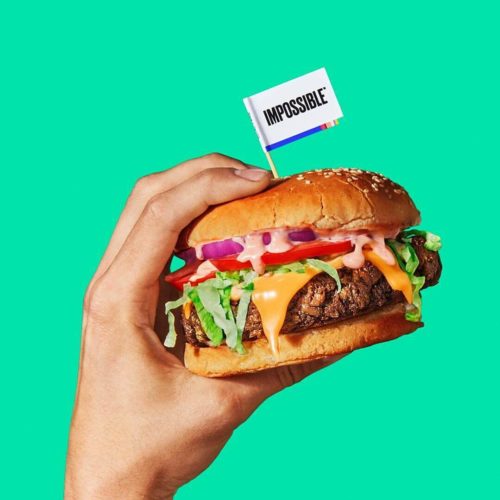 Air New Zealand became the first airline to serve the plant-based Impossible Burger last year. The original burger came with two patties, plus cheese and a dairy-based sauce. The initial launch sparked backlash from local MPs, one of whom it a “slap in the face” to red meat producers, according to the New Zealand Herald.

Impossible Foods CEO Pat Brown recognized that the vegan burger might cause controversy: “New Zealand is the best in the world at producing food in the conventional way, and this is disruptive change, potentially,” he said. “On the other hand, that change is inevitable and being ahead of the curve is an awesome opportunity.”

But as Chave explained, the plant-based burgers were a hit — even as popular as the airline’s traditional burgers. Air New Zealand made bite-sized Impossible Sliders available on its San Francisco to Auckland flights soon after. “Given we’re heading into a seasonal menu change in Business Premier we couldn’t resist sharing the experience with customers travelling on another of our North American routes while also giving it a bit of a twist,” Chave explained at the time. The trio of meatless sliders were available until last June.