The budget-friendly supermarket chain is now home to four new frozen vegan products. Meat-free sausage rolls, which feature soya meat and flaky puff pastry are now on offer. The vegan sausage rolls cost 30p each and are “as good as the real thing,” according to Aldi.

Vegan No Beef Burgers are also available, made meaty with pea protein, soya, mushrooms, and onion. The burgers (which cost £1.99 for a pack of two) provide 19g of protein per patty.

Aldi also launched No Chicken Burgers, which are coated with a crispy golden breadcrumb, and Superfood Burgers, packed with quinoa, couscous, butternut squash, red pepper, pumpkin seeds, and sweet potato. Both burgers cost £1.99 for a pack of two.

Aldi maintains that its new burgers are “everything you would expect from a burger… thick, flavoursome and juicy,” adding that it’s “hard to believe they’re vegan.” 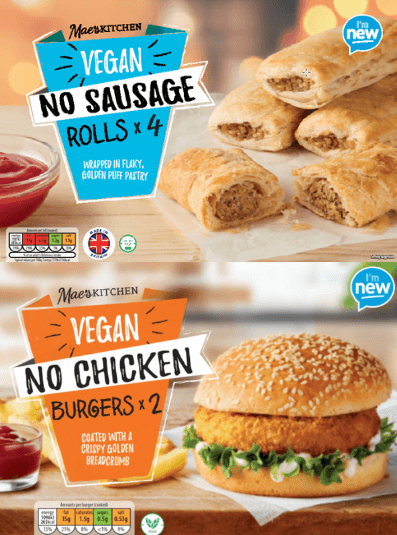 Julie Ashfield, Managing Director of Buying at Aldi, said in a statement, “The launch of our new vegan range is in response to our growing, ethically inspired customer base, looking for delicious alternatives to meat and another example of our ongoing commitment to cater for all diets, at everyday low prices.”

“We look forward to expanding our vegan offering even further over the coming months,” she added.

In March it was reported that Aldi had begun selling vegan Scottish breakfast packs, complete with plant-based square sausages, link sausages, and haggis made with vegetables, pulses, and spices.