The progressive launch last December followed the company’s other recent launches of vegan Thai curry kits and dairy-free ice cream options. The brand names the additions as “More of what you WANT!”, implying that the product releases are due to consumer demand.

The entire Earth Grown range is meat-free, according to ALDI. The vegan-specific items are also free from animal products such as eggs and gelatin. ALDI promoted the release on its website, and social media users were quick to celebrate. 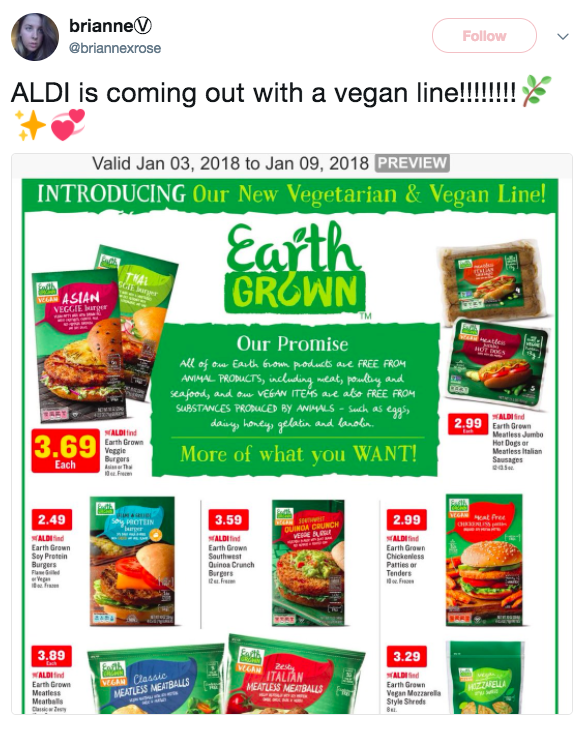 The chilled range is still rolling out across U.S. stores as the chain expands, according to a source who has stated they work for ALDI. The supermarket chain has stores in 18 countries; the ever-growing popularity of vegan food may guarantee further releases in the coming year.

Increasing demand for cruelty-free products has inspired big names across the globe to better cater to the evolving market. Pizza Hut has permanently added vegan cheese to its menus, while Starbucks, Tesco and Trader Joe’s continue to stock their shelves with new plant-based products.

Aldi in the UK joins Tesco, Waitrose, Sainsbury’s, and Morrisons in expanding vegan options. Earlier this month Tesco, the UK’s largest supermarket chain, launched a cooking app to help customers create vegan meals for their upcoming holiday feasts. Recent data show that nearly half of UK homes will be serving vegan and vegetarian options this Christmas.

Vegan food is expected to continue to trend in 2019, with more meaty ‘bleeding’ burgers expected to gain mainstream attention. As well, vegan desserts, such as ice cream and doughnuts, will see more attention and more options for consumers in the coming year. Also expected is a shift to more creative vegetable applications such as veggie noodles and the rise of vegetable ‘butchers’ chopping up fresh produce on demand for hungry consumers.