New York Representative Alexandria Ocasio-Cortez aka AOC supports the effort to free Happy, the Bronx Zoo elephant who has been alone for over a decade.

The Bronx native responded to a Twitter thread calling on NY politicians to take action for Happy today. “Thanks for bringing Happy’s situation to my attention! The team and I are looking into what we can do,” she wrote, punctuating the tweet with an elephant emoji.

Happy the Asian elephant is the subject of an on-going battle between Bronx Zoo officials and animal rights advocates. In Defense of Animals has named the attraction on its list of the 10 Worst Zoos for Animals for eight times. In 2018, the Bronx Zoo was given the #1 spot on the list.

Thanks for bringing Happy’s situation to my attention! The team and I are looking into what we can do 🐘

A Life of Captivity, Alone for Over a Decade

Happy was the first-ever elephant to pass the mirror self-recognition test — considered a sign of self-awareness — and she is the first elephant to have a court-appointed lawyer representing her. The Nonhuman Rights Project filed a lawsuit on her behalf last October, hoping to have her freed and sent to an accredited elephant sanctuary. There are two in the U.S.; The Elephant Sanctuary in Tennessee and the Performing Animal Welfare Society in California.

Happy was born in the wild in 1971, captured, and sold to the U.S. for $800 to the now-defunct Lion Country Safari, Inc. She and her sibling, Grumpy — both named after the dwarves from “Snow White and the Seven Dwarves,” were sold to the Bronx Zoo in 1977, where they lived together for 25 years. In July 2002, the sisters were transferred to an enclosure with two other elephants, Patty and Maxine. One of the elephants charged at Grumpy, who fell. Grumpy was euthanized that October when she could no longer stand. 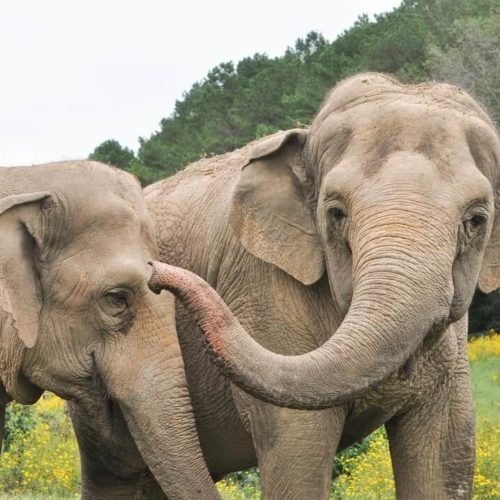 Happy’s life improved for a brief moment, when she was moved into an enclosure with a younger elephant named Sammy, who she acted as a mother to. But Sammy was diagnosed with liver disease in 2006 and was euthanized shortly after. Happy has been alone ever since. Maxine the elephant was euthanized last November following an illness, leaving Patty alone in her enclosure.

Elephants are highly sentient, social creatures that form complex social bonds, but zoo officials argue it’s safest to keep her isolated for her own safety.

“Happy spends most of her time indoors in a large holding facility lined with elephant cages, which are about twice the length of the animals’ bodies. The public never sees this,” the New York Post wrote in 2012.

Many zoo animals suffer from a mental condition known as zoochosis, which is characterized by repetitive behaviors, self mutilation, and depression. Gus, the Central Park Zoo polar bear who was euthanized in 2013, brought national attention to zoochosis by compulsively swimming figure eights in his pool for up to 12 hours a day. He was the first zoo animal to be treated with Prozac.

“Happy will continue to live at the Bronx Zoo where we feel she is very content and we know she is well cared for,” Bronx Zoo director Jim Breheny told the New York Daily News today.