Despite her status as a plant-based wellness guru and animal rights activist, actress Alicia Silverstone still likes to indulge in a sweet treat every now and again.

In a recent Instagram story, the “Clueless” star showed off a vegan chocolate shoe made by Chocolate Inspirations, a gourmet chocolatier company that specializes in edible shoes. Though it’s not clear why the brand focuses on shoes, they appear to be quite popular. Chocolate Inspirations, founded by Pam Vieau, offers a range of dairy-free chocolates, toffees, truffles, caramels, and candy bars.

Vieau owner is a culinary artist with fifteen years of practical experience “developing and marketing specialty chocolate products and confections,” the company website notes. “She is an accomplished chocolatier with a solid knowledge of chocolate and confections having trained under American, Swiss, Belgian and French Master Chocolatiers.” 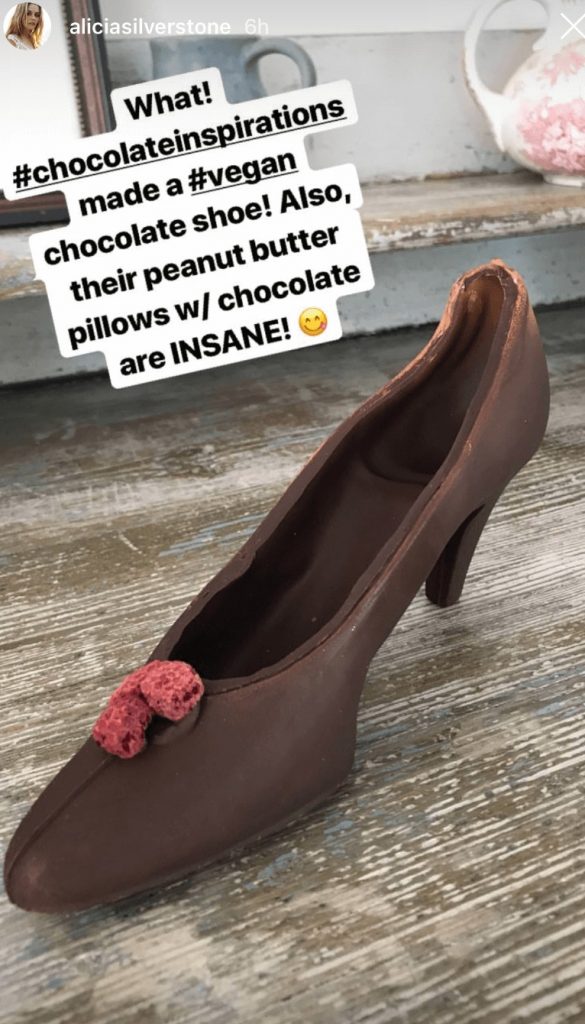 Silverstone isn’t alone in her love of vegan chocolate; around the world, the market is booming. The reason for its growth, according to a report from earlier this year, is because it’s healthier than milk chocolate — milk dilutes the antioxidant power found in dark chocolate. Cacao — either raw or dark at over 70 percent cacao solids — is also an excellent source of magnesium and iron.

Silverstone is well-versed in nutritional speak; she’s the founder of her own wellness line of vitamins in a partnership with supplement giant Garden of Life. The mykind Organics are certified organic, non-GMO, and vegan.

“I was pregnant and seeking a supplement that complimented my diet,” she noted earlier this month. “It was apparent there was a big lack of quality on the market. My quest to push the envelope in the vitamin industry and create a product that is truly wholesome and transparent is what drove me to start a line of supplements.”

Silverstone’s shoe appears to be the Miss V Raspberry Petite Red Dark Chocolate Shoe, which is named after Vieau. The shoe features 62 percent smooth dark chocolate adorned with dried raspberries and is both non-GMO and gluten-free. The company also creates Vegan Peanut Butter Pillows and Chocolate, of which Silverstone also received a sample – the actor described the best-sellers as “insane!”