When you’re Alicia Silverstone, there’s one career highlight that will follow you around forever: the ’90s classic that is “Clueless.”

When you think of the nineties hit coming of age movie, is it Cher Horowitz and that signature yellow plaid blazer skirt combo that sticks in your mind? Or maybe you love *that* freeway freakout scene with Dionne Davenport? Or Tai Frasier’s iconic makeover? The movie, with all of its quotable moments, has a place in the hearts and minds of many.

It’s nearly 30 years since “Clueless” first hit movie theatres (Ugh! As If!), and it wouldn’t be what it is today without its admired protagonist. So what is she doing now?

Silverstone has been busy since 1995. She’s a successful entrepreneur, a passionate animal rights activist and environmentalist, and a mother to an eight-year-old son, Bear. But if there’s one word that ties each of her endeavors together, it’s “kindness.” 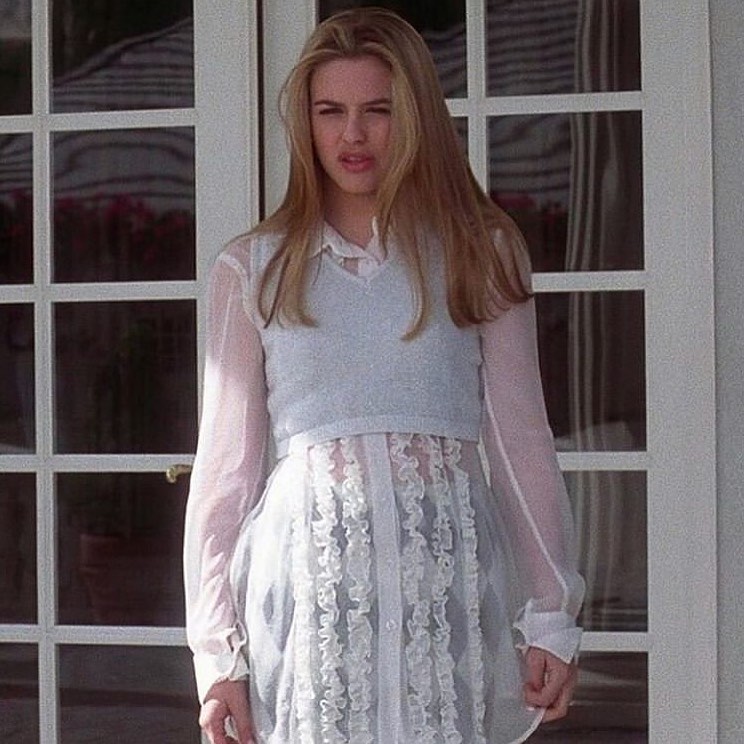 ‘Clueless’ star Alicia Silverstone is a passionate vegan and environmentalist.

Although she remains a passionate actor, the animals have Silverstone’s heart. It was around the age of 21 that she threw herself into the vegan lifestyle — or “the kind life” as she refers to it. Like many before and after her, it started with looking from her plate to her pet.

“I watched the documentary ‘The Witness’ and took a look at my dog and thought “If I’m not willing to eat you, how can I continue to eat these other creatures that have the same desire to live, are just as funny, and have the same reaction to pain as my dogs?” she told LIVEKNDLY.

“I had a realization that I was an animal lover eating animals and it didn’t feel ok to be aware of the terrible reality behind the animal agriculture industry and condone them by actively participating in it with a non-vegan diet,” she says. “I realized that until I stopped purchasing animal products, the suffering would never end.”

She was all in for the animals, but the health benefits surprised her. She lost weight, she recalls, and her energy levels increased dramatically. Her hair got thicker, and all of her allergy symptoms disappeared. She enjoyed the health benefits of veganism so much, she chose to extend her passion to others and created Mykind Organics. 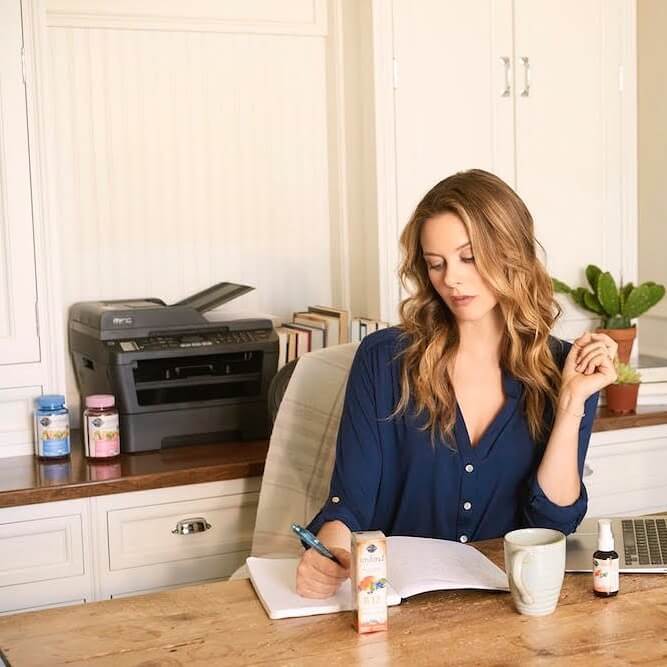 The idea for the line of non-GMO, vegan vitamins first came about when Silverstone was pregnant with Bear. Every vitamin recommended to her was either packed with chemicals or not suitable for vegans, so she solved the problem herself.

Despite her busy work schedule — she’s been filming in Vancouver recently, as well as meeting with politicians to request more vegan options on the menu in California schools — her attention is still very much on the vegan vitamin line.

“In vitamin-land, Mykind Organics launched 16 herbal supplements last fall. I’m so thrilled about this line,” she said. “These products are so special because we source ingredients from sustainable organic farms and use a groundbreaking organic, non-GMO extraction method without the use of conventional corn alcohol or other harsh chemicals commonly used.”

In the spirit of wellness, she has also partnered with the deodorant brand Crystal Deodorant to become its brand ambassador. The company makes its products with natural, non-toxic ingredients. “I am proud to partner with a company that shares my values and is committed to making healthier and kinder products,” she said in a recent statement. 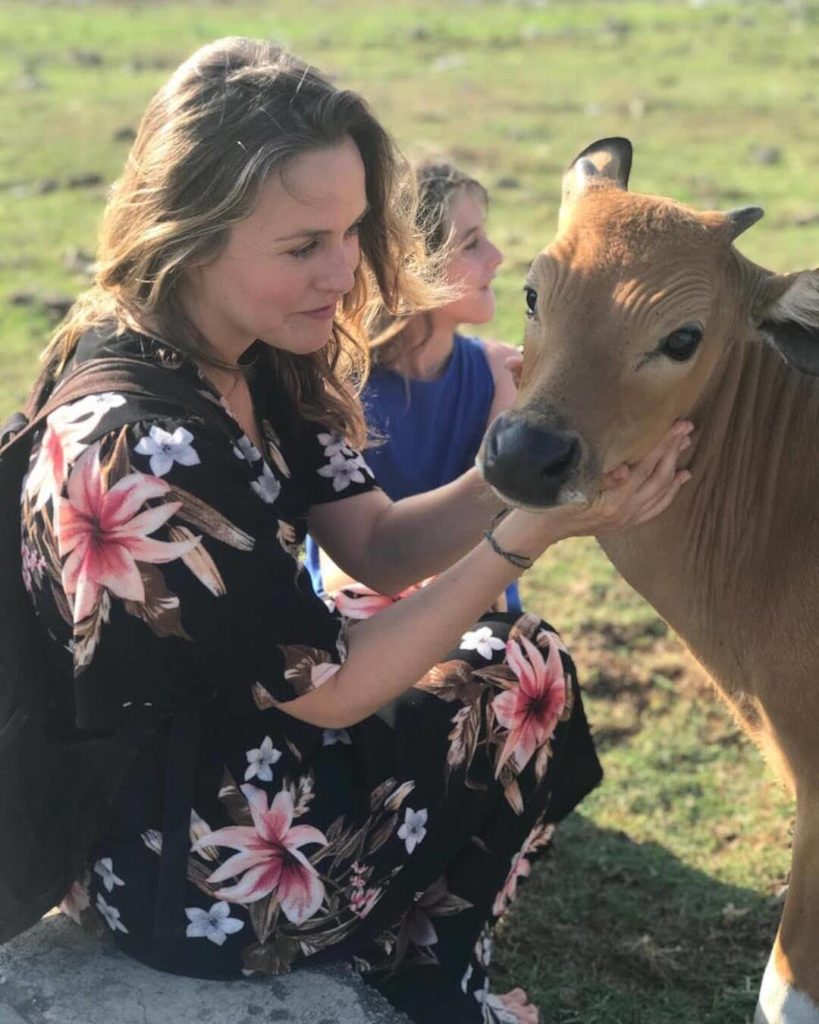 ‘It’s Actually Cool to Be Vegan’

Silverstone’s clearly up on all the benefits of veganism, from animal welfare to human health. But does she see a world where everyone feels the same way as her? Potentially. “I think we’re making significant strides,” she says.  I remember going on the Letterman show many years ago sharing that I was vegan and was received like I was an alien!”

“Now it’s actually cool to be vegan and immensely valued from a health and environmental standpoint,” she continues. “The United Nations has even called for a massive decrease in animal agriculture! You can find vegan options and entire vegan restaurants at airports!”

Last year, the United Nations Environment Program labeled tackling meat consumption as one of the world’s most urgent problems. And it’s a good start, but those in power have to take it further, says Silverstone. “I believe legislation and markets must raise the bar significantly so people won’t have the option to be blissfully unaware of cruel consumption. We are at such a crucial tipping point,” she says.

According to the International Panel on Climate Change, we have less than 12 years before we can no longer stop irreversible damage from the climate crisis. Floods, heatwaves, wildfires, droughts, and many other forms of natural disasters will be commonplace, and millions of people will be displaced.

Silverstone sums it up best. “This is terrifying,” she says. But there is potentially a way out: if we all live like her.

“The easiest and most effective thing any individual can do is adjust their diet to ditch animal products,” she explains. She’s not wrong. The biggest-ever food production analysis conducted last year revealed that the single biggest thing a person can do to reduce their impact on the environment is to go vegan. 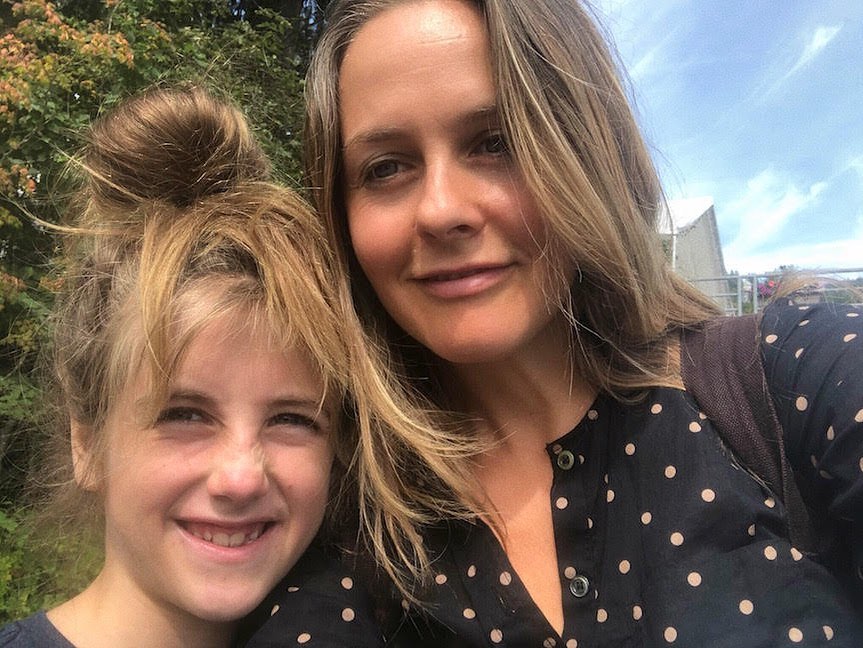 ‘We Have So Much More Work To Do’

So how do you keep fighting in a world that feels like it’s doomed? You keep in mind who you’re doing it for. The generation of tomorrow. For Silverstone, it starts with her son, Bear.

“It’s been the biggest inspiration to watch his innate compassion for animals and the earth unfold as he grows,” she says. “[He] inspires me every day and every moment.”

Silverstone says it’s a doddle raising a vegan kid. Because of the way he eats, she says he never gets sick, and living plant-based even has an impact on his behavior and personality.
“Because Bear feels so good he acts so sweet,” she says. “There’s no raising my voice or negotiating with him, just easy respectful conversations.”

She’s also inspired by her dog Sampson, any cow or pig that crosses her path, and the activists that put themselves on the line to fight for animal rights and for the planet. “It’s beautiful and encouraging,” she says, referring specifically to the millions of young people who have recently protested for climate action around the world.

Her inspiration isn’t limited to those fighting for the planet, but those fighting for humanity too. She refers to Kendrick Castillo, the teenager who lunged at the gunman at STEM School Highlands Ranch, allowing others the time to run and hide. “He was incredibly brave and heroic,” she says. “Kendrick’s selfless love and courage combined with my disdain for gun violence leaves a mark on my soul.”

Silverstone’s support and love for the planet — and the people and the animals that depend on it — is unrivaled. The star may be known for her iconic looks in “Clueless,” but she carries the passion and vulnerability that shaped Cher Horowitz’s character with her to this day. She uses her platform, and her huge Instagram following — as Cher may have had she have been a Millennial in 2019 — to advocate for change, and above all, kindness.

She recently posted a selfie to her Instagram account with the caption, ”Hi there friends. I was having a particularly happy moment when I took this. I was overcome with that very unique joy I experience when I think about all the love and support I give to my body and this planet (from the kind diet).” She asked her 935,000 followers to consider flirting with veganism, to ditch the single-use plastic, and to become more conscious about the world that surrounds them.

She continued, “I’m going to continue riding the highs that [the kind life] can bring, but boy does my heart break a little bit every day multiple times over all the unconscious acts of abuse to our earth and creatures and ourselves every day.  We have so much more work to do!”

And as for “Clueless?” Sorry to disappoint, but Silverstone says it’s unlikely there will ever be a sequel. Unlikely, but not impossible.

“No one knew what a cultural phenomenon Clueless would be when it was made,” says Silverstone. “But I’m thrilled that it resonates with so many people! Even amongst a whole new generation. I’ve run into teenagers who gush over it. It’s so fun!”

According to the actor, Amy Heckerling — who directed the original movie — has said there won’t be another. But who knows? You could be the one to change her mind. Silverstone says, “if you have any ideas, Tweet her at @AmyHeckerling! Ha!”

In the meantime, she has a few other projects up her sleeve. She recently filmed “The Baby-Sitters Club” for Netflix, as well as the new horror movie “The Lodge,” which will hit theatres this Fall.