You can now buy vegan Müller Corner-style yogurts, thanks to Almond Breeze.

Just like Müller Fruit Corners, each flavor comes with a separate topping to pour over the almond milk yogurt (or eat separately, whatever takes your fancy). There is a sixth flavor, however, due to its inclusion of honey roasted almonds, it’s not vegan.

The new range was introduced in response to consumer demand, said Suzanne Hagener, Blue Diamond’s Director of Brand Marketing. Nearly 114 million Americans aim to eat more vegan meals for health reasons according to a survey from earlier this year.

“Consumers are seeking more delicious plant-based foods,” Hagener said in a statement. “We believe our yogurt, made from Almond Breeze almondmilk, is the perfect way to satisfy the need for tasty plant-based options.”

She continued, “We developed single-serve sidecar cups that pair the deliciously creamy Almond Breeze Almondmilk Yogurt Alternative with the crunchy goodness of Blue Diamond almonds and other toppings to bring innovation to the growing plant-based yogurt space.”

She added, “Dairy-free can be exciting, and that’s exactly what we’ve created here.” 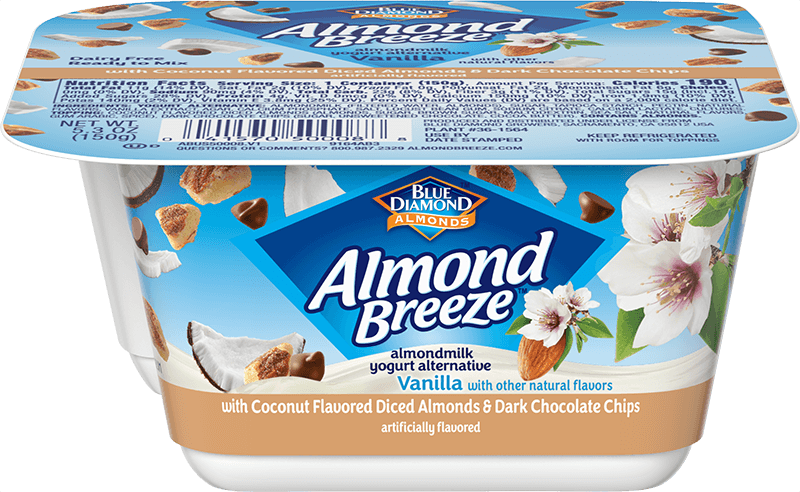 Across the U.S., more and more consumers are seeking out dairy-free products. A study from last year revealed that — regardless of whether they follow a vegan diet — a study from global food giant Cargill found that nearly half of all Americans regularly purchase plant-based milk.

This is primarily due to lactose intolerance and dairy allergies, but a number of consumers are also concerned about growth hormones in cow’s milk, as well as its antibiotic and saturated fat content.

Like Blue Diamond, food brands are stepping up their game to cater to this rising demand. Earlier this year, French food giant Danone opened the largest ever vegan yogurt factory just outside of Pittsburgh.

CEO of Danone North America Mariano Lozano said at the time, “as consumers continue to seek out more dairy-free options, having a facility that meets this standard gives us an opportunity to deliver on their growing demand and high expectations.”