The newly-christened stadium will run on renewable energy⁠—a mixture of on-site solar and off-site resources⁠—and it will be “zero waste” with compostable containers, according to the press release. It will also ban single-use plastics and use collected rainwater to create the “greenest ice in the NHL.” At least 75 percent of the food will be locally-sourced, with unused food from events being donated to local community programs.

“We’ve secured naming rights to the historic arena previously known as KeyArena. Instead of naming it after Amazon, we’re calling it Climate Pledge Arena as a regular reminder of the importance of fighting climate change,” Amazon founder and CEO Jeff Bezos said in a statement. “We look forward to working together with Oak View Group, a new Climate Pledge signatory, and NHL Seattle to inspire global climate action.” 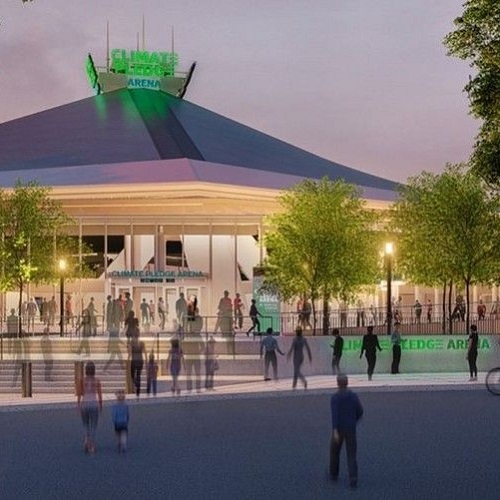 The name-change announcement shortly follows the news of Amazon’s new $2 billion fund for environmentally-friendly technology, spanning the energy, transportation, manufacturing, and food and agriculture industries. The online shopping behemoth, long criticized for not disclosing its emissions, did so for the first time last year. This came after pressure from employees and investors alike. The newly-named Climate Pledge Arena’s carbon emissions will be publicly disclosed.

This year, on the same day that it announced the $2 billion pledge, Amazon released a report revealing that its carbon emissions increased by 15 percent in 2019. According to the report, Amazon created 51.17 million tons of carbon dioxide—the equivalent of running 13 coal-burning power plants for a year. Amazon justified this increase with a 22 percent sales increase. The company added that its “carbon intensity,” the metric it uses to measure its performance, actually fell by 5 percent.

Amazon Employees for Climate Justice (AECJ), a group of nearly 9,000 workers, critiqued the Climate Pledge Arena’s renaming on Twitter. The move, AECJ wrote, is an “obvious PR stunt:” that is “indicative of the company’s entire approach to climate change: pledges and symbols without real action.”