Vegan barbecue is expected to be a top food trend this summer, according to a new report released by Amazon UK. The independent report, titled “#SmileItsSummer Trends Report,” was carried out by research and trends firm Stylus Innovation + Research.

According to the report, veganism is expected to play a major role in eating in and out this summer as health-conscious and ethical consumers seek to cut back on animal products.“Britons are striving to incorporate more plant-based meals into their diets,” said Steve Tooze, advisory consultant at Stylus.“[A]nd brands are responding by creating vegan meats, milks, and yoghurts that mimic the flavors, textures, and nutritional credentials of their animal-based counterparts more closely than ever before.”

The report reveals that vegan grilling staples, like vegan burgers, vegan sausages, and vegan cheese were among the top-ordered products on AmazonFresh over the past 12 months. Based on this, Amazon has predicted that meat-free barbecues will achieve mainstream popularity with British consumers this summer. Tooze also notes that choices for condiments are diversifying as well, particularly kimchi. 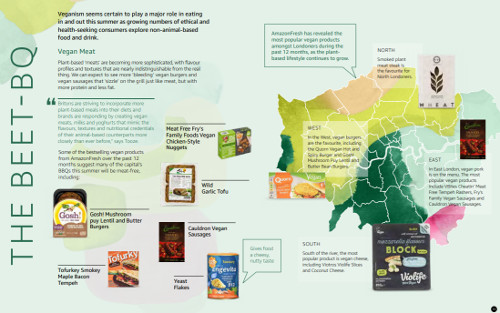 Which products does Amazon think will win big with customers this summer? According to the report, it varies by region. AmazonFresh customers living in west London are shown to prefer vegetarian grilling products like Quorn Vegan Hot and Spicy Burgers and Gosh! Mushroom Puy Lentil Butter Bean Burgers. East Londoners appear to like Cauldron Vegan Sausages and VBites Cheatin’ Meat-Free Tempeh Rashers, while those in the north prefer Smoked Mheat made by SGaia. Vegan cheese by Violife was the biggest hit with customers in the south.

It’s not just the summer that’s bringing out vegan grilling ideas. Recent data confirms that vegan food is growing in popularity among British consumers. One study found that Brits ate more than 2.5 million feet of vegan sausage last year and another revealed that the number of vegans living in the UK grew by 700 percent in just two years. Supermarket giant Tesco has responded to the growing demand by releasing its Wicked Kitchen range of ready-made vegan meals, which the company has credited for its recent boost in revenue.