Vegan meat brand Impossible Foods is struggling to keep up with the demand for its beef-like “bleeding” burgers.

The California-based company said in a statement, “we are facing short-term ramp-up challenges resulting from demand greatly outstripping supply.”

It apologized for inconveniencing restaurants across the U.S. with the shortage, recognizing that some businesses have come to rely on the additional “foot revenue and traffic” that comes with offering the Impossible Burger on the menu.

The trial was so successful the chain has since revealed the new vegan Whopper will be added to menus across the U.S. and in Canada. 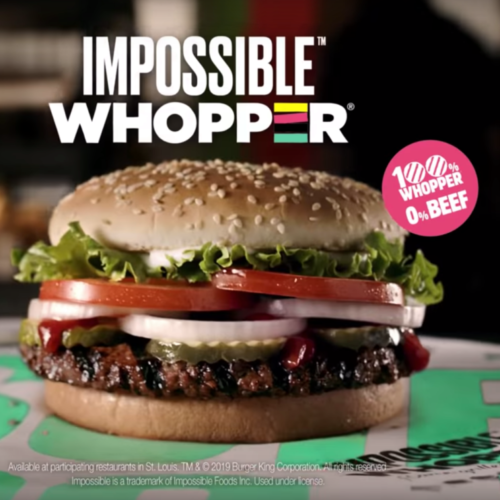 Impossible Foods is on a mission to help shift the food system away from animal agriculture and towards sustainable plant-based foods.

“We’ve been eating meat since we lived in caves,” the company website explains. “And today, some of our most magical moments together happen around meat: weekend barbecues. Midnight fast-food runs. Taco Tuesdays. Hot dogs at the ballpark.”

“Those moments are special, and we never want them to end. But using animals to make meat is a prehistoric and destructive technology,” it adds.

Instead of using animal products to make meat, the Impossible Burger 2.0 — the original “bleeding” patty’s “jucier and beefier” successor — is made with soy protein, coconut oil, and sunflower oil. The secret ingredient is heme.

Made via yeast fermentation, heme is what makes “meat taste like meat” says Impossible Foods.

The Impossible Whopper is so beef-like, it has even fooled a meat lobbyist.

Eric Bohl, the Director of Public Affairs & Advocacy for Missouri Farm Bureau, recently tried the vegan patty. He said, “if I didn’t know what I was eating, I would have no idea it was not beef.”

“If farmers and ranchers think we can mock and dismiss these products as a passing fad, we’re kidding ourselves,” he added.

To keep up with the demand, Impossible Foods told CNN Business it will increase the opening hours of its plant in Oakland, California, and will install a second production line, doubling its current capacity.