If you feel like you’re missing out on America’s favorite pizza topping, you can stop fretting; vegetarian brand Amy’s Kitchen has launched a cheesy vegan pepperoni pizza.

“Pepperoni has always been a favorite pizza so why should anyone be left out?” asks Amy’s Kitchen on its website. “Amy’s Gluten Free Vegan Pepperoni Pizza has all the fun and flavor of this favorite pizza parlor classic.”

Amy’s has topped the pizza with its own meatless pepperoni, made in-house. The meatless topping is accompanied by vegan mozzarella-style “cheeze,” organic tomatoes, and a “new special” gluten-free crust.

“Everyone who has tasted this pizza is surprised at how delicious and satisfying it is, and we hope you feel the same,” says Amy’s. 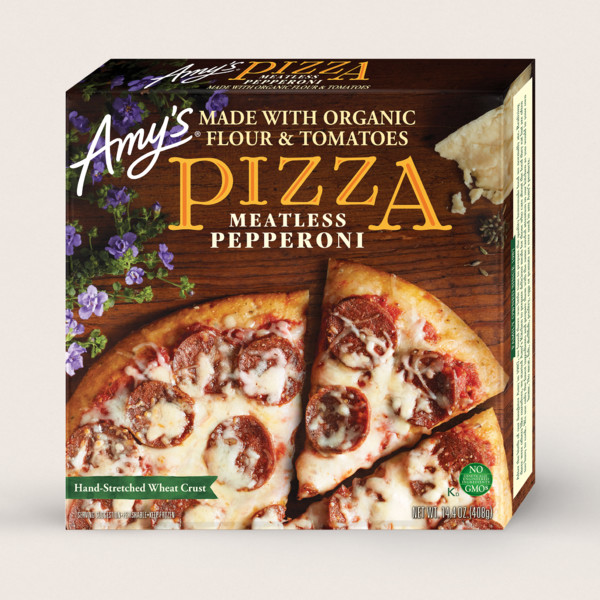 If you want a little more than just pepperoni on your pizza, the Vegan Supreme has you covered. As well as the meatless pepperoni, veggie sausage and a mix of vegetables, including mushrooms, organic onions, and bell peppers, are on the pizza.

“At Amy’s, we take pizza seriously,” says the brand. “That’s why we had our work cut out for us when Andy, Amy’s dad, asked for a plant based pizza that meat lovers would enjoy as well as vegetarians.” It adds, “just one slice and we’re sure you’ll agree: this one reigns supreme.”

As well as its selection of vegan pizzas, Amy’s — founded by Rachel and Andy Berliner and named after their daughter, Amy — offers a wide range of plant-based foods.

For busy days, the brand offers burritos, wraps, and soups that you can quickly heat up. If it’s a party you’re hosting, there’s Vegan Cheeze Pizza Snacks and Vegan Margherita Swirls.

The brand’s food is so adored, it even has a whole section on its website for its love letters. “We’ve always believed that if we care about what we do and who we cook for, you’ll be able to taste the love,” says Amy’s.