Animal agriculture costs more in health and environmental damage than it contributes to the U.S. economy, according to a recent study published in the Proceedings of the National Academy of the Sciences (PNAS).

The study, which analyzed 20 sectors, compared the cost of premature death caused by particle pollution to its economic value. Farms—animal agriculture, in particular—were the worst offenders.

“At the margin, we’re seeing that the damages from air pollution provided by farms are larger than the marginal value that the farms provide in economic terms,” explained co-author Inês M.L. Azevedo, associate professor Stanford’s Department of Energy Resources Engineering. 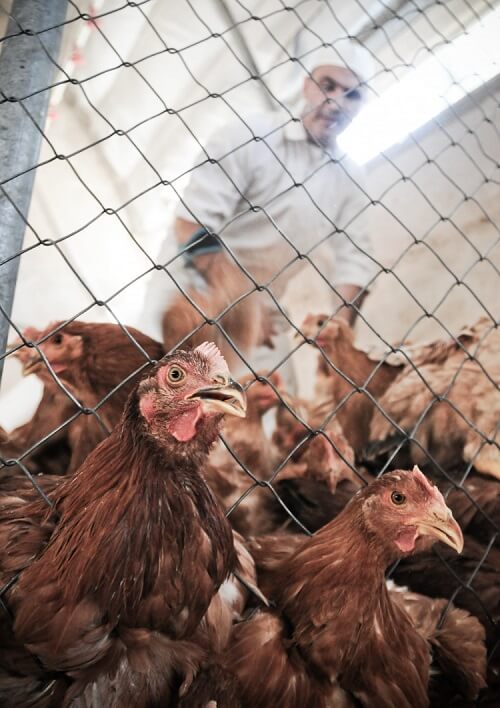 Poultry is the biggest offender when it comes to particle pollution. | Jo-Anne McArthur / Animal Equality

The Meat of the Matter

According to the study, while pollution from utilities and manufacturing has dropped, farms present a growing problem. “Right now it’s only animal production and agriculture that has damages much larger than the value-added,” Azevedo said.

Poultry pollution emits particles and ammonia. And when these combine with sulfur dioxide and nitrous oxide to create a secondary source of fine particle matter (PM 2.5) pollution.

PM 2.5 may be a cause of premature death. It’s especially problematic for people with lung or heart disease. Fine particles post the greatest health hazard. PM 2.5 can get deep into lungs or the bloodstream, according to the Environmental Protection Agency (EPA).

The study accounted for particle pollution, not health costs of diets heavy in processed animal products and greenhouse gas emissions. But, these have effects on human health as well.

Research from the World Cancer Research Fund found that processed meat like sausage and bacon can increase the risk of various forms of cancer, including colorectal and stomach. Meat-heavy diets also pose a risk to heart health, multiple studies have found. A study from the Cleveland Clinic found that health-related costs directly related to red and processed meat intake will hit $285 billion this year.

Animal agriculture is one of the driving forces behind the climate crisis, which poses a risk to human health. The World Health Organization (WHO) notes that it is linked to accelerated biodiversity loss, the depletion of freshwater supplies, stress on food-producing systems, and ozone depletion.

The WHO notes that there is “unavoidable uncertainty” as far as climate change’s impact goes: “The public health consequences of the disturbance of natural and managed food-producing ecosystems, rising sea-levels, and population displacement for reasons of physical hazard, land loss, economic disruption and civil strife, may not become evident for up to several decades.”