(Updated March 15, 2020) | A new series on Discovery’s Animal Planet shows viewers what life is like for farm animals saved from slaughter and abuse.

Chelsea, Michigan-based animal rescue Barn Sanctuary feature in “Saved By the Barn,” which premieres on Discovery-owned Animal Planet on April 11.

“All of us at Barn Sanctuary are thrilled to open our barn doors to Animal Planet’s millions of viewers,” Barn Sanctuary founder Dan McKernan said in a statement in May 2019. “This show will give farmed animals the chance to be seen in a different light as we rescue, rehabilitate, and provide a loving home to abused and neglected farmed animals.”

The show will feature McKernan, who left work in the city to co-found Barn Sanctuary, as well as his family, employees, and the animals they save.

Each of the sanctuary’s residents has their own unique backstory, coming from slaughterhouses, family farms, hoarding cases, and natural disasters.

Workers spared piglets Elsa and Anna from slaughter when they were found immobile as their siblings were being loaded up to go to a finishing farm — where pigs are taken to be fattened up.

A farmer surrendered Mike the cow as they were unable to take care of his medical needs. He is completely blind, but gets around the sanctuary with the help of his cow friend DJ.

Portia and Twitch are two baby goat siblings who were surrendered shortly after birth after being found motionless. All they needed was a warm blanket and formula, according to the sanctuary. Ellen, who was rescued at the same time, was given up due to her leg deformities. She now walks using prosthetics. 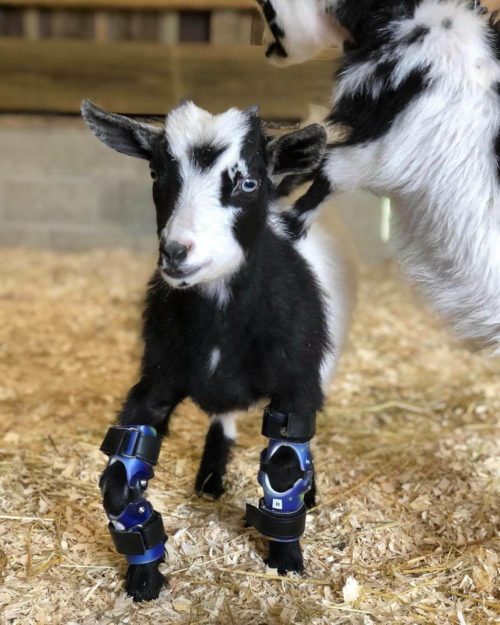 “There is an enormous and rare opportunity to show the world who these incredible animals are, and we’re touched by the outpouring of excitement for this show,” said Kelly Holt, executive director of Barn Sanctuary. “The lifesaving work we do at Barn Sanctuary will undoubtedly capture the hearts of millions, and we’re grateful to Animal Planet for the opportunity.”

Along with rescue and care, Barn Sanctuary teaches the public about the lives of animals typically raised as commodities. The Michigan-based non-profit advocates for a plant-based diet for the good of the planet and animals.