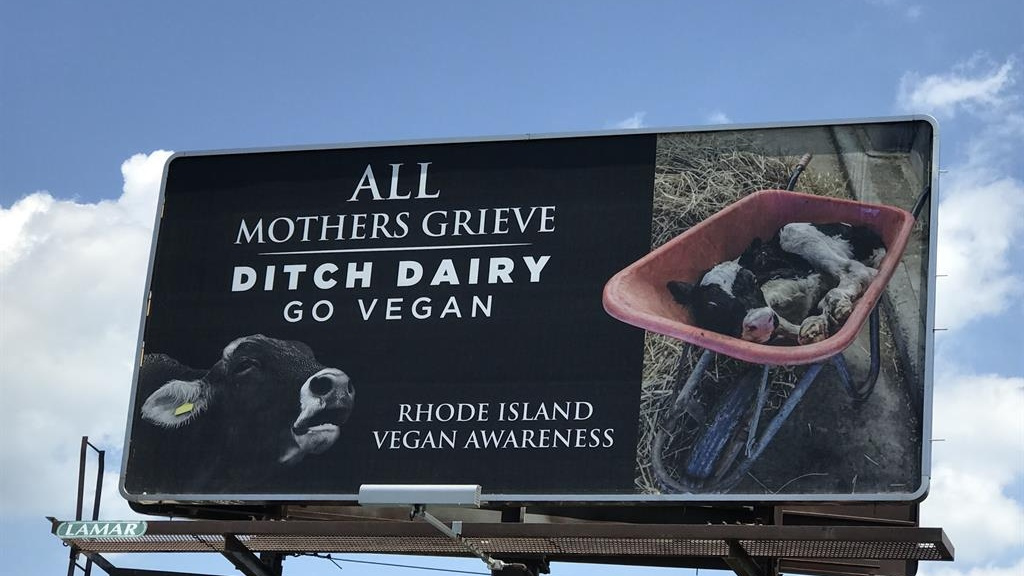 A billboard has been erected at a busy intersection in Rhode Island asking passersby to ditch dairy and go vegan. The billboard was commissioned and created by animal rights organization Rhode Island Vegan Awareness.

In an ABC6 News segment, the billboard’s controversial nature was discussed. It depicts a distressed mother cow with a deceased baby cow in a wheelbarrow. The slogan reads: “All mothers grieve. Ditch dairy. Go vegan.”

Some felt the new advertisement would make people think about their dietary choices,“It has a good message” one driver told ABC6. “How they put the mother in it, it makes it, you know, closer to the heart. It makes you care about the animals,” she continued. However, not everyone agreed with this point of view. Another driver called the billboard “disgusting” and “a disgrace.”

“The way that animals are raised for food and also for dairy can also be very uncomfortable,” said Rhode Island Vegan Awareness president Laura Barlow, in response to the negative comments. She added, “So it’s hard for us to present this topic without it being somewhat uncomfortable for people because it’s uncomfortable in its very nature.”

Rhode Island Vegan Awareness is a non-profit organization that works to encourage the local community to embrace veganism, with advertisements, campaigns, film screenings, and more. According to ABC6, the new billboard from the group “certainly accomplished one goal, starting a conversation.”

Around the world, animal rights organizations are using billboards and advertisements to encourage the general public to ditch meat and dairy and embrace veganism. Go Vegan World, the first organization to launch ads of this nature in Europe, believes that most people already hold vegan values without realizing, and billboards and advertisements help people to see the truth behind the meat and dairy industry.

“If you asked most people if they think it is wrong to unnecessarily harm other sentient beings, they would answer that it is,” explained Sarah Higgins, founder of Go Vegan World. She added: “Therefore, most people already hold the values that underpin veganism. The aim of Go Vegan World is to expose this inconsistency between our values and our behavior.”