The multiple-award-winning documentary “The Last Pig“, which details the life of a pig farmer who searches for compassion amid a lengthy ethical struggle over sending his pigs to slaughter, is set to screen in London this week. Vegan celebrity Moby has praised the film as “[s]tartling, honest and deeply beautiful.”

“For over a decade, Bob Comis has provided a humane—even idyllic—life for the pigs he farms. But as he tends to his charges, he develops a closeness that begins to haunt him, and his weekly trips to the slaughterhouse become agonizing. With 250 pigs on the farm, Comis suddenly finds himself trapped by his past,” reads the film’s description.

“Through his personal journey, THE LAST PIG raises crucial questions about equality, the sanctity of life, and the value of compassion. Comis’ soul-bearing narrative carries us through his final year of farming pigs, the struggle to reinvent his life, and the ghosts that will haunt him forever.”

Londoners can get tickets for the screening of this 54-minute deep-thinking-inspiring film, knowing all proceeds will be contributed to Tower Hill Stables Animal Sanctuary in Essex.

Different to many other vegan documentaries and awareness organizations that rely on graphic footage of the horrors of factory farming, “The Last Pig” does not use such images. Taking a gentle, non-violent approach is in hopes that viewers will be spurred to reconsider their perception smaller-scale animal farming in addition to Big Ag’s factory farming.

Vegan actor and activist James Cromwell, known for his role in the pig-centric film “Babe” called the movie “an extraordinarily insightful and moving film!” Adding that it’s “profoundly important.” 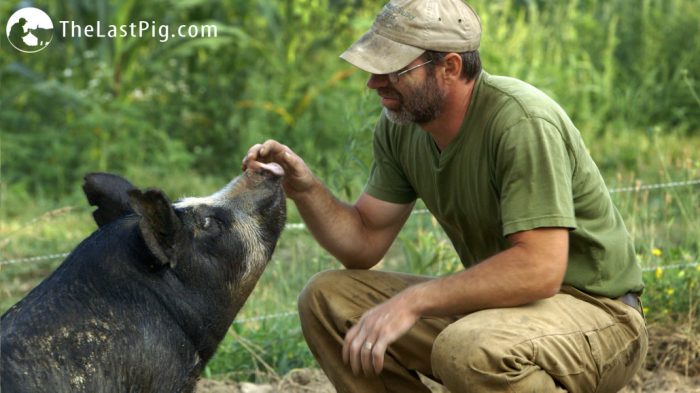 The London screening event will include a vegan buffet, in the Hackney Attic of Hackney Picturehouse on March 28th, courtesy of a partnership between Essex Pig Save and the film. Tickets cost £12.00. The film will air at 8 pm and a Q&A session with the film’s director Allison Argo is welcome for audiences to partake in.