AAA Northeast, which encompasses clubs in Connecticut, Massachusetts, New Hampshire, New Jersey, New York, and Rhode Island, will no longer sell SeaWorld tickets. Over the past year, protesters from activists groups Protest SeaWorld NYC and PETA (People for the Ethical Treatment of Animals) have staged demonstrations outside of the organization’s Manhattan club on the Upper West Side.

“No decent business would want to be associated with an amusement park that’s still breeding dolphins and riding them around like surfboards in circus-style shows,” PETA Executive Vice President Tracy Reiman said in a statement. “AAA Northeast made the right call in cutting ties with SeaWorld, and PETA is calling on AAA branches that haven’t yet done so to follow suit.” 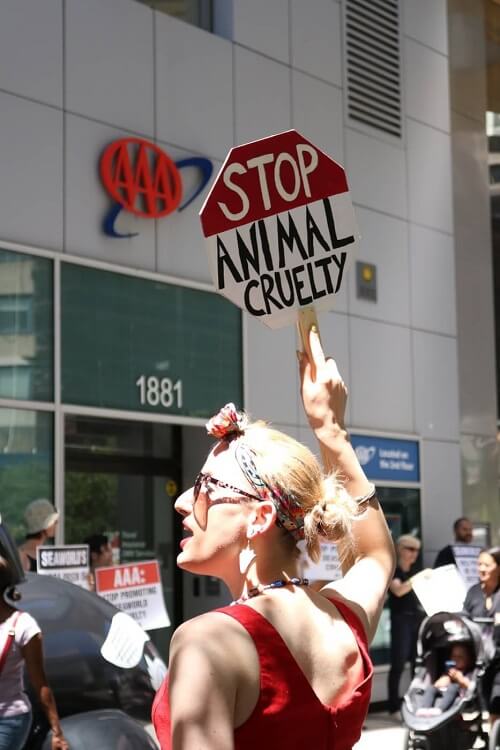 The public opinion of SeaWorld has fallen since the 2013 documentary “Blackfish.” | PETA

SeaWorld’s status as the quintessential family summer vacation destination where kids could marvel at trainers commanding dolphins and whales to perform tricks has taken a hit in the year’s following the 2013 documentary “Blackfish.”

The film lifted the veil for many, revealing the psychological impact of captivity on orcas. In the wild, a whale can travel up to 140 miles a day. It’s been said that a captive whale’s tank is essentially the size of a bath tub. Orcas will spend their day swimming in a circle, typically deprived of any social interaction.

Captive whales have been known to attack tank mates, trainers, and chew on the concrete siding of their tanks, causing dental damage. Health issues include collapsed dorsal fins (likely from a lack of adequate nutrition) and a shorter lifespan. Wild orcas can live for an average of 50 years. But the average age of death for SeaWorld orcas is 14-years-old.

Like humans, orcas are complex beings who form strong bonds with the pod. Family members are rarely out of hearing range of one another. Little is still known about their language, but variations from clan to clan can be as different as English and Russian, according to Smithsonian.

AAA Northeast joins other travel giants in severing its relationship with SeaWorld on the grounds of animal cruelty, including Virgin Holidays, Thomas Cook, JetBlue, WestJet, AAA Arizona, and AAA Washington.