ASDA is the latest UK supermarket to bring out its very own vegan and gluten free cheese!

According to a twitter user, you can now buy a free from mature cheddar alternative from stores. It’s unclear wether there will be other options in the range, however if they are looking to compete with the likes of Tesco and Sainsbury’s, who already have their own ranges, it’s likely this won’t be the only flavour on offer. 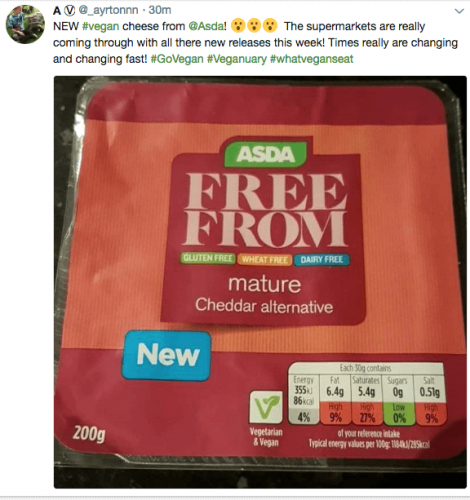 ASDA is a great place for vegan food shopping when it comes to convenience food, selling frozen goods such as veggie popcorn ‘chicken’, burgers, and veggie meatballs. The supermarket already stocked vegan cheese brand, violife, but starting their own vegan cheese range is a promising move from the supermarket, suggesting that they’re keen to start offering more vegan alternatives.

The second full week of January is just starting, Veganuary is in full swing, and there has already been several announcements about new vegan food arriving at supermarkets in the UK. The most impressive selection so far has been from Tesco, who has teamed with Derek Sarno and Wicked Healthy to provide 18 new vegan friendly products including on-the-go lunch options and ready meals.