Cathay Pacific is the world’s first airline to serve Omnipork, a plant-based, sustainable alternative to pork.

Green Monday, an organization that aims to tackle climate change and global food insecurity through promoting a plant-based diet, helped facilitate the menu item. Fast Company named it one of China’s Top 50 Most Innovative Companies in 2014. Green Monday worked with Cathay Pacific to introduce Beyond Meat to the menu of The Pier First Class Lounge at Hong Kong International Airport in October 2018, according to the website.

OmniPork was developed by right{treat}, a food tech company launched by Green Monday. It is made from a blend of pea protein, shiitake mushrooms, soy, and rice. According to the brand, it contains 86 percent less saturated fat, 66 percent fewer calories, 260 percent more calcium, and 127 percent more iron than traditional pork. It is also cholesterol-free. 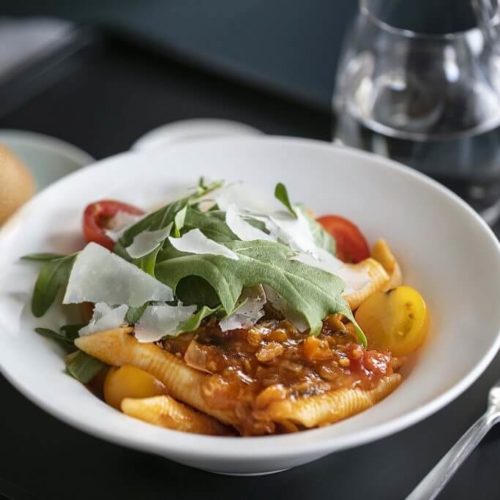 Pork is the most-consumed meat in the world. It accounts for 36 percent of global meat intake, according to data from the FAO (Food and Agriculture Organization of the United Nations). It is the most popular meat in China — the nation slaughters 700 million pigs annually to feed demand.

But, an outbreak of African swine fever that began in August 2018 has led to a decline in pork consumption and an opportunity for OmniPork, the South China Morning Post reports.

“We do not need to explain to consumers and restaurants what [Omnipork] is for. They have to find another source for pork,” Green Monday founder David Yeung said during an interview last September.

While African swine fever is not deadly to humans, it is devastating to pork producers. It has halved China’s pig herds to 200 million over the past year. China’s pork output dropped by an “unprecedented” 25 percent — 13 million metric tons — a Rabobank animal proteins analyst told Bloomberg.

Yeung expects OmniPork to be served in 15,000 restaurants and retailers across Asia by the end of the year. Most recently, global restaurant chain Sizzler began serving OmniPork at 30 locations across Thailand.

Cathay Pacific will review customer satisfaction and continue to experiment with OmniPork.