Among the fleet was the new Audi e-tron GT, which joins the company’s e-tron SUV and e-tron Sportback. The e-tron GT is a 4-door luxury coupe, set to launch in 2021.

The all-wheel-drive vehicle was introduced by “Iron Man” star Robert Downey Jr., who was hired to promote the car.

“Audi executives remained mostly mum about details of the electric coupe,” reports the Los Angeles Times. “But they did say that it will have a 100-kWh battery pack, a 248-mile range and a 0-60 mph time of 3.5 seconds. It will be able to charge to 80% battery strength in 20 minutes.” 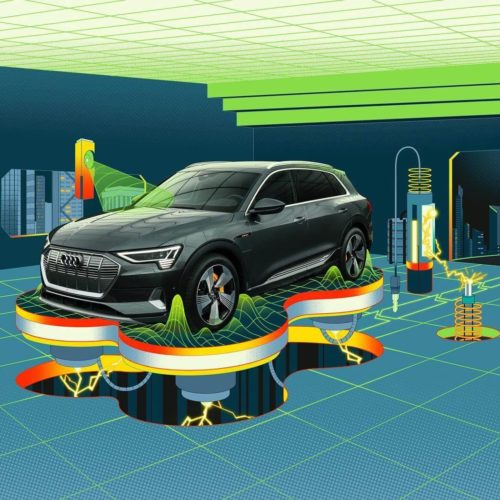 The e-tron GT will also boast an all-vegan interior, made of recycled fabrics including floor mats made out of reclaimed fishing nets. Tesla, which began offering vegan interior options last year, was criticized for initially outfitting cars with leather. The leather industry is a major contributor to greenhouse gases, which electric vehicles aim to reduce.

Audi anticipates that 30 percent of its production will be electric by 2025.

“A changing world needs beauty and intelligence in order to propel itself forward,” Audi of America’s incoming President Mark Del Rosso told the Times. “This is part of our evolution.”

According to Audi, it is also considering a “vegan package” that would make it easier for customers to choose interiors with animal-free, eco-friendly materials.

“We’ve had some customer requests for that. And definitely moving forward, we’re looking at all sorts of new materials, both for inlays, and trims, seats, and things like that are more environmentally friendly,” Audi e-tron product manager Matt Mostafaei told Motor1.
Michigan-based Rivian also debuted its all-electric pickup truck, the R1T, at the L.A. Auto Show. It’s positioning the truck as the “Land Rover” of the electric vehicle world.

“It’s the ideal platform to go out and enjoy nature,” Rivian founder R.J. Scaringe told the Times. “If the analogy were clothing, this is more like a Patagonia jacket and less like an Armani suit. It’s comfortable getting dirty. The interior design is rugged and cleanable,” he said.  “It’s the version of Elon Musk you’d want your daughter to marry.”