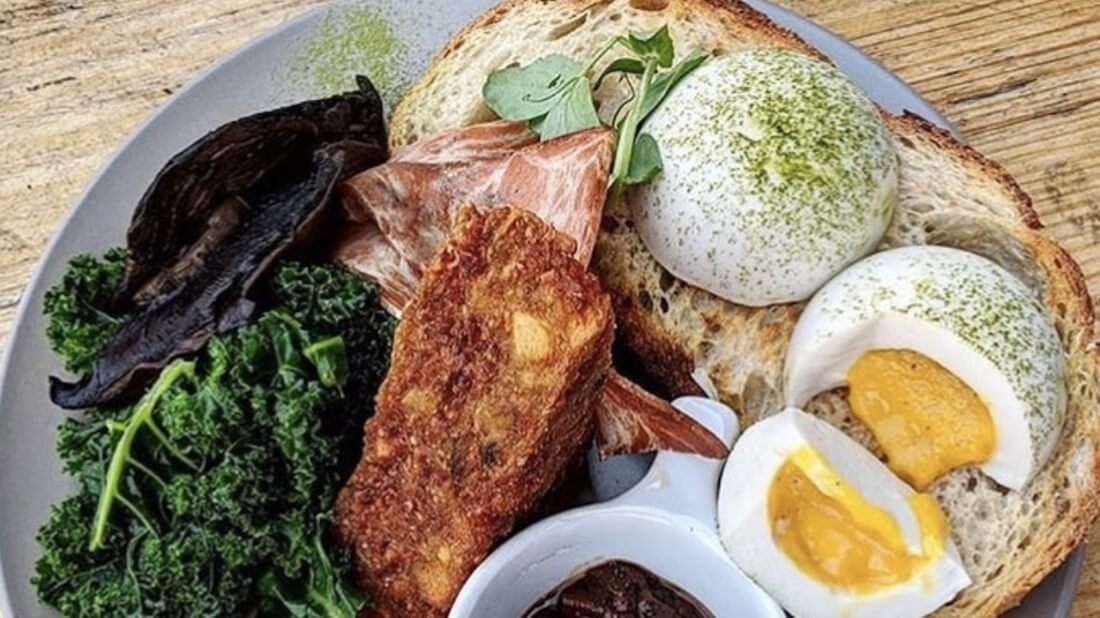 “Head down for a taste test, you won’t be disappointed!” The company wrote alongside a promotional video for the cafe. Matcha Mylkbar, based in Victoria, offers a multitude of veganized breakfast options as well as brunches, bowls, smoothies, and a variety of lattes (including a purple peanut butter latte).

Matcha Mylkbar have created vegan bacon and eggs. Head down for a taste test, you won’t be disappointed! ?? pic.twitter.com/DgycP4WEeA

Mylkbar’s vegan eggs are made from linseed protein, sweet potato, and coconut milk-infused agar agar. The eggs are featured in the cafe’s Big Breakfast, alongside konjac bacon, potato and leek rosti, truffle roasted mushrooms and more. Vegan Hollandaise Eggs, Shashuka Baked Eggs, and Egg on Toast are also on the breakfast menu. Brunch options include Matcha Made in Heaven Pancakes and We Love You a Waffle Lot, which consists of activated charcoal waffles served with vegan eggs, bacon, halloumi and maple syrup.

This is not the first time Qantas has showed its support for veganism. At the beginning of the year, the company’s low-cost subsidiary airline Jetstar launched an in-flight vegan menu. Thanks to Qantas, for the first time ever vegan flyers can get their hands on a vegan meal without having to order ahead. The move won the company the title of “Most Vegan-Friendly Airline in Australia” from the animal rights organization PETA.

Damn, going vegan means that you can’t have bacon and egg waffles with grilled halloumi anymore…. NOT! Yep that’s right, our new menu has this EPIC charcoal waffle with our famous vegan eggs, vegan bacon and vegan HALLOUMI (you heard it here first!) by the LEGENDS at @hellofriendfoods tag the whole squad!

“Australians seek out vegan food everywhere, whether they’re in a supermarket or cafe or 30,000 feet in the air,” said PETA Australia. “Cruelty-free culture has taken off in Australia and we applaud Jetstar for listening to its vegan customers.”

Australia has the third fastest growing vegan market in the world and it’s showing no signs of letting up soon. In May, record numbers of consumers ditched meat for “No Meat May,” a campaign similar to the UK-based initiative Veganuary, which encourages people to give up meat for their health, the animals, and the environment. Due to this soaring demand, vegan business is booming. In May, Australia’s first completely vegan mall opened on the Gold Coast, and in April, the Sunshine Coast’s first vegan bakery launched to a welcoming crowd of customers. Further, the country’s first vegan Greek bakery, based in New South Wales, announced expansion plans in June.

Image Credit: Year of the Vegan