Vegan micro-bakery Revival Coffee and Donuts is on a mission to satisfy the growing demand for vegan foods, particularly vegan sweets. The British bakery just created a giant vegan doughnut (seriously, it’s bigger than your head).

The micro-bakery posted a photo of the giant raspberry and lemon-flavored doughnut on social media. “We didn’t think our donuts were big enough already,” it captioned the post, alongside a photo of the colossal dessert.

“We were planning to open our shop on Good Friday, but due to the coronavirus, we have had to postpone,” Hayward told LIVEKINDLY. “We are continuing to work from our micro-bakery. [Revival offers] a free local delivery service—or a ‘knock-and-run’ service as we deliver to the doorstep!”

Revival’s most popular doughnut flavors include The Loaded Biscoff and The Peanut Butter Cup. The latter features a peanut butter icing drizzled with chocolate and topped with a handmade vegan peanut butter cup. The donut is filled with raspberry jam. 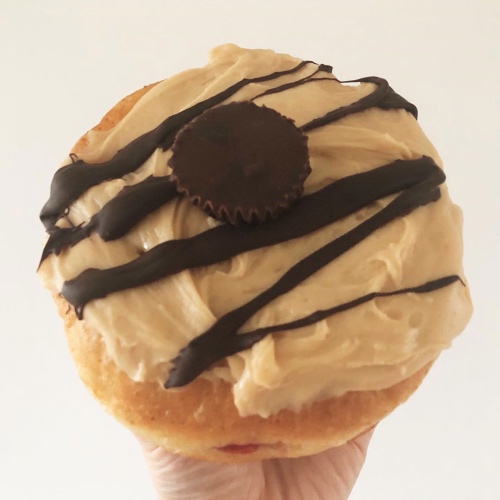 Peanut Butter Cup is one of Revival Coffee and Doughnut’s most popular flavors. | @RevivalCoffeeAndDonuts

Dairy is falling out of favor with Brits. One farmer leaves the UK’s dairy industry every week. Profits dropped 50 percent from 2018 to 2019, according to Farming UK.

Kate Vlietstra, Mintel’s global food and drink analyst, said in a statement: “the rising popularity of flexitarian diets has helped to drive demand for meat-free products. Many consumers perceive that plant-based foods are a healthier option.”

As a result of Brits’ insatiable appetite for vegan foods, there has been a major surge in meatless food sales in the United Kingdom. According to a new report from Mintel, UK meat-free food sales skyrocketed by 40 percent from 2014 to 2019.