Bangalore, India, is set to host its first ever vegan festival this month. Named Wilderfest, the festival will be held at the shopping mall, VR Bengaluru, in Whitefield on May 26th and 27th.

Backed by the Federation of Indian Animals Protection Organisations (FIAPO) and The Pollination Project, the aim of the festival is to bring together Bangalore’s vegan community, as well as to raise awareness and encourage non-vegans to learn more about the lifestyle. Five vegans from the city are organizing the festival, Namita Satheesh, Shweta Thakur, Anushree Kamath, Teena Bethann, and Rheea Mukherjee, in the hope that attendees will be inspired to work towards a greener future for the city.

“We want to bust myths about veganism and support some of the vegan businesses in our city,” Bethann told Vegan First. “I am really excited about some of the workshops and screenings we’re going to be offering to the public.” 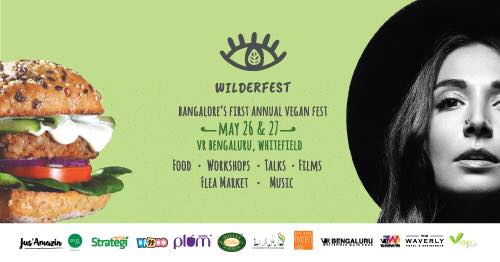 Baking workshops, wholefoods plant-based cooking workshops, and screenings of Infinity & Black and Cowspiracy will be on offer to guests, as well as clothing stalls, musical performances, guest speakers, and much more.

“VR Bengaluru is one of the most popular malls in the city,” explained Thakur. “We feel that having a vegan fest at a mall is a great opportunity to reach out to a larger group of people in an environment that they feel at ease in. They will be more open to hearing about veganism at such a venue since food and lifestyle choices are extremely personal to most of us. At the end of the day, if we have planted a seed of thought in their minds, we would call that a success.”

Veganism is growing in popularity across India, with brands such as vegan cheese giant, Violife, recently landing on supermarket shelves in the country. Vegan beauty products are also popular, with demand consistently rising – a more conscious consumer is the reason for the demand, claims Shankar Prasad, the founder of the vegan beauty brand, Plum.

“The thoughtful consumer goes beyond ‘I-me-myself’ and thinks about what goes into making the product s(he) is using,” Prasad noted.