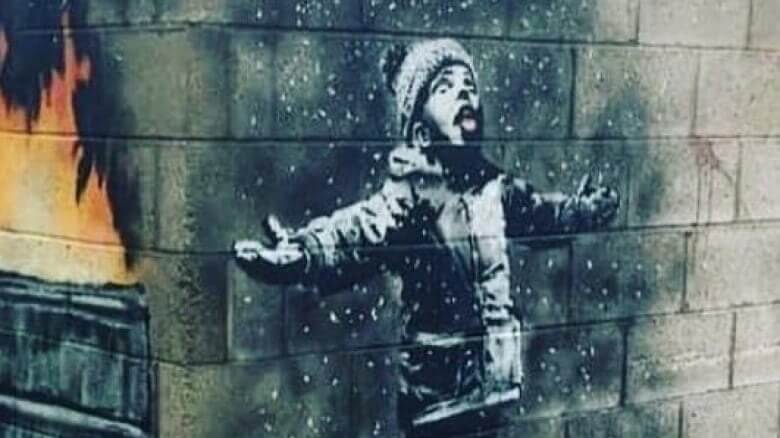 Banksy – an elusive, UK-based, anonymous street artist – has revealed he is behind a new mural highlighting pollution problems in Port Talbot, Wales.

Banksy’s work is known for satirically drawing attention to key social and political issues. One of his most famous works, known as the “Balloon Girl,” has appeared in several variations in different places around the UK over the past few years. In 2014, he adapted the design to support Syrian refugees; the girl, who lets go of the balloon in the artwork, appeared as a young Syrian fleeing war.

Now the artist has turned his attention toward issues of the environment. The new artwork, painted on the side of a garage in Port Talbot, shows a young child playing in what appears to be snow. Around the corner, a dumpster on fire is depicted and it soon becomes clear that the child is actually standing in a cloud of ash.

Confirming he was behind the new mural, Banksy posted a hard-hitting video of the piece on his verified Instagram account. To the music of “Little Snowflake,” the video shows the child and then the dumpster, with the camera moving to expose the looming Tata Steel plant behind the garage. Banksy simply captioned the post, “Seasons Greetings.”

Port Talbot and the Tata Steel plant – which is one of the biggest in the world – have hit headlines over the past year due to the rate of pollution coming from the facility.

The town was previously thought of as the most polluted town in the UK, however, the World Health Organization (WHO) withdrew this title after discovering its air pollution levels measured at 9.6853 micrograms. But this is only marginally under WHO’s 10 microgram guidelines.

According to residents, black dust from the plant covers cars, houses, and gardens as well as their pets and many have had enough. One resident, 55-year-old Gary Owen, messaged Banksy himself on social media, asking the artist to raise awareness of the town’s pollution problems. He didn’t receive a response but he believes it was his message that prompted Banksy to take action.

Owen told the BBC, “I couldn’t believe it. I thought somebody else had done it and put his name on it. It would have to be a heck of a coincidence for him to do something in Wales for the first time on pollution when I Instagrammed him in August.”