Less than one week into baseball season, Bareburger at Yankee Stadium has just announced that it will carry the vegan Beyond Sausage by Beyond Meat for the season. Although vegan options are expanding in ballparks throughout the US, Yankee Stadium is the first to offer this latest Beyond Meat product.

In true ballpark fashion, patrons can order the Beyond Sausage Original Bratwurst Link in a fluffy vegan pretzel bun topped with pickled jalapenos, caramelized onions, and as much ketchup, mustard, and relish as they can squeeze into the bun.

The highly anticipated Beyond Sausage first premiered at the Beyond Burger restaurant in the Boulder, Colo., Whole Foods, though it has quickly expanded to both restaurant chains and independent eateries across the US. In comparison to the traditional pork-based sausage, the Beyond Meat product contains 43% less fat, 27% fewer calories, 26% less sodium, and no animal ingredients. The sausages are said to look, taste, feel, and smell exactly like their pork-based counterparts. Beetroot gives it a ‘meaty’ color, coconut oil creates ‘juiciness,’ and a plant-based algae casing replicates the signature snap of a traditional sausage. The links come in three varieties including Original Bratwurst, Sweet Italian, and Hot Italian, though for now, only the Original is available at Yankee Stadium. 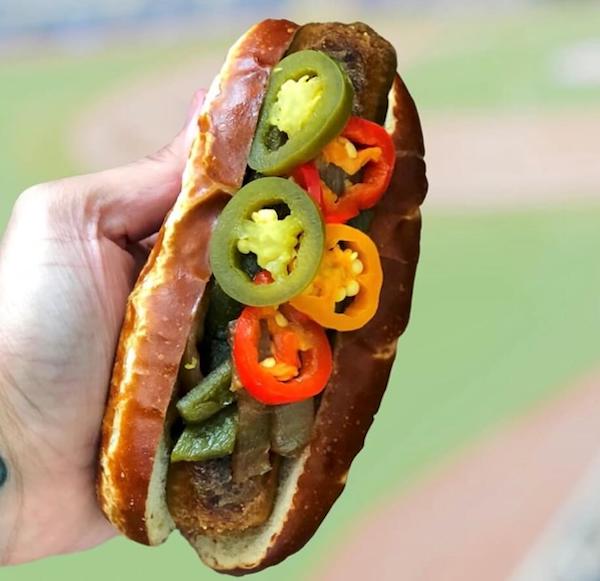 In addition to this ballpark, Bareburger has locations across the US, selling traditional animal-based burgers, fries, and shakes. However, the menu also includes a variety of vegan options, including both the Impossible and Beyond Burgers, for vegan and veg-curious patrons. The new Beyond Sausage has also launched in Bareburgers nationwide.

From Vegan Cauliflower Cheesesteaks in at Citizen’s Park in Philadelphia to the Impossible Burger at Citi Field in Queens, N.Y., vegans can now enjoy plant-based versions of ballpark favorites wherever they root for their home team.