San Francisco-based software company Salesforce has banned beef from its Dreamforce conference. The mega-event, which brings together 171,000 people for four days, celebrates “trailblazers and customer success.”

The beef ban saves 9 million gallons of water, according to the company. In addition to taking beef of the menu, Dreamforce will use compostable utensils and packaging. It won’t offer straws and will provide reusable plastic bottles for all attendees, saving an estimated 100,000 single-use bottles. Food waste is also out — all leftovers will be donated to local nonprofit Food Runners, the San Francisco Chronicle reports.

Salesforce chief impact officer Suzanne DiBianca said that the change came with increased expenses, but is worth the price. 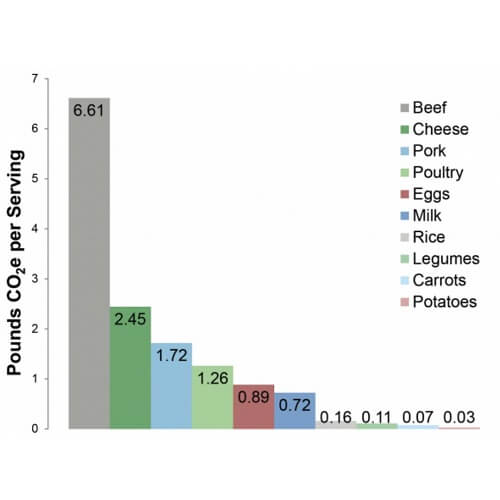 The beef with beef. | Michigan University Center for Sustainable Systems

The U.S. Cattlemen’s Association, a trade organization and lobbying group, was not happy about the ban.

She added, “Livestock production will continue to sequester carbon in the soil and offset the emissions required to maintain those server farms, as well as the emissions produced from all the planes, trains, and cars it took to get attendees to San Francisco.”

Salesforce said that it will offset emissions from employee travel. It is the largest private employer in San Francisco.

It is not clear what other animal products Salesforce will serve at its conference. But, beef is the top culprit as far as carbon emissions go. According to Michigan University’s Center for Sustainable Systems, beef emits more CO2 than other kinds of meat. One serving of beef emits 6.61 pounds of CO2 in stark contrast to .11 pounds per serving from legumes.

A number of universities across the globe have banned beef in a bid to slash carbon emissions, including the University of Coimbra in Portugal, Helsinki University, and Goldsmiths, University of London.